DRI: A Year On Since July 5 Violence, Organizers Haven’t Been Punished 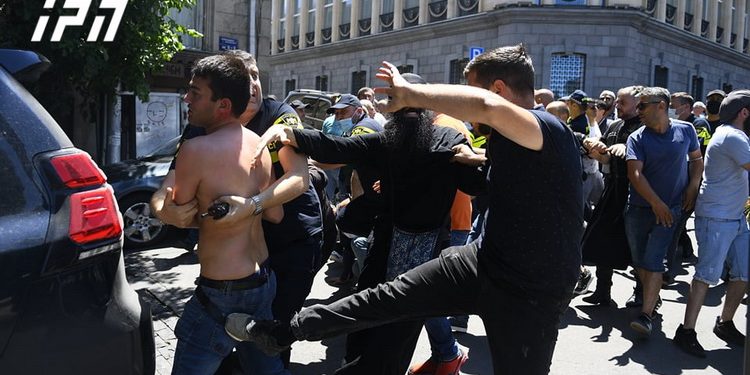 The Democracy Research Institute (DRI) presented the interim findings of its study of far-right groups and their activities.

The report is presented in three parts: media monitoring of far-right groups, rallies of homophobic groups, and judicial monitoring of the July 5 violent events.

The director of the Institute, Tamar Khidasheli, said that despite the fact that one year has passed since the violent events of July 5, the perpetrators have not yet been punished and the activities of ultra-right, pro-Russian groups have intensified.

She noted that as a result of the study, it was revealed that in some cases the messages of the ultra-right, pro-Russian groups and the government coincide with each other.

“We are monitoring the activity of far-right pro-Russian groups on social media and we are also monitoring their rallies, we have also been monitoring the ongoing court proceedings related to the violence that occurred on July 5, 2021. As a result of this monitoring, it became clear that a year has passed since the violence and the organizers of the violence have not been punished, despite it being proven in trials that there is evidence that the violence was indeed organized. Instead of taking proper procedures against these groups, they have strengthened, transformed into a political party, opened regional offices and managed to mobilize financial resources.

“Regarding the observation of social media, I would like to highlight the fact that unfortunately, in some cases, the messages of the far-right, pro-Russian groups and the government overlap. This is especially noticeable when far-right groups talk about the opening of a second front in the context of the Russia-Ukraine war, we have also heard the same from government officials. It is a pity that their messages coincide with each other,” said Tamar Khidasheli.

The attacks were committed by right-wing groups on July 5 and 6, 2021, in an effort to prevent the Tbilisi Pride march from taking place.  The attacks targeted civic activists, community members, and journalists who were peacefully exercising the rights guaranteed to them by Georgia’s Constitution.  The mobs went largely unchecked by authorities as they attacked citizens and also broke into and vandalized the offices of the Shame Movement, the Human Rights Center, and Tbilisi Pride, and attacked a long-term opposition tent protest outside of Parliament.

Following the violence, in a few days, TV Pirveli cameraman Lekso (Aleksandre) Lashkarava was found dead in his home, though the official investigation concluded that the reason of his death was drug overdose.