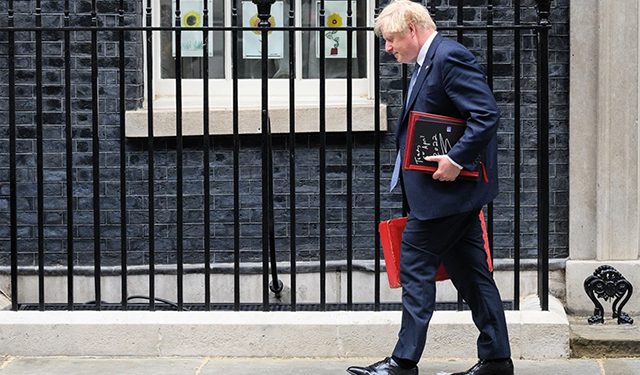 I don’t like talking about victory in the big sense, like winning and losing. You could argue that all Ukraine has to do to win is survive. Russia wants to destroy this democratic, sovereign, independent, successful former Soviet country on its doorstep, and it cannot allow Ukraine to be used as an example. – Dominic Nicholls, Defense and Security Editor at the Telegraph, tells Radio Free Europe / Radio Liberty’s Georgian service. Nicholls served for 23 years in the British Army with operational deployments in Iraq, Afghanistan, the Balkans and Northern Ireland. We asked him about the PM Johnson saga, British support for Ukraine, and the possible outcomes of the war for Ukraine and Putin.
What’s the British public’s problem with Boris Johnson?
It was a number of things that built up over a number of years. And that was why it took so long for there to be any kind of killer blow, because each individual issue in and of itself wasn’t enough to finish his political career. But, collectively, there was this groundswell of opposition that eventually, when it found an outlet, was just overwhelming. Support, and therefore his political capital, just bled away, and, in the end, Boris had to bow to the inevitable. It came to a head over issues of integrity regarding a member of the government team he had appointed, and that just shone a light on everything else: the [handling of] the pandemic, Brexit and to a large extent the Ukrainian war. Many of these issues had been around for years, it just took until now to find space in the diary to address them. It’s was surprising it took this long, as most other prime ministers would probably have stepped down a long time ago because of the opposition they were facing.
On to Ukraine: Johnson and many other prominent Western political leaders have been saying this is the civilized world’s war against Putin, that it’s “Europe’s war.” If that’s the mindset, why change horses mid-race?
Well, one man doesn’t make a government policy; one man doesn’t make a national endeavor. Why change horses mid-race? It’s not as if he had any particularly outlandish or forthright views that are not shared across the political scene here in Britain, and, therefore, it’s extremely unlikely that whoever succeeds him will change the policy in any way.
The impression was that for Boris it was important on a personal level. How much of an important figure was he on the geopolitical chessboard?
He always saw himself as a grand statesman. He was a big fan of Churchill; saw himself in that mold, but I don’t think that was his prime motivation for visiting President Zelensky before many other Western leaders, and very early in the war, at great personal risk. I think he did it from genuine motivation, personal feelings, and perhaps a little of his personal domestic political troubles. But he really was channeling the spirit and the feeling here in Britain.

People now look at these bombastic statements that come out of the Kremlin, and laugh

Regarding any successor, there might not be so many visits to Ukraine, but I don’t see any wavering of support. The one great thing Johnson did was in the early weeks of the war to rally the European political establishment to shore up their positions, particularly with weapons transfers. The ball is rolling and you might not need such a powerful voice now to keep it going, you just need a good, strong, steady hand at the tiller. Any successor, who might not be the razzmatazz, flamboyant showman that Johnson was, with the political heft a British prime minister has, will keep on with that policy. There’s no suggestion at all that anybody would change that, and that will be sufficient to keep the political momentum going.
Johnson’s meeting with London-based oligarch Lebedev resurfaced – with what implications?
The suggestion was that after a NATO conference a number of years ago, when Boris Johnson was Foreign Secretary, he went straight from there to a meeting with Alexander Lebedev, whose son, a former KGB officer, Boris Johnson then made a member of the House of Lords. Not only is that an odd place to go straight to after a NATO conference, but also he should, as Foreign Secretary, not have gone there without his officials and without all sorts of clearances in advance, which didn’t happen.

Putin doesn’t really care about casualty figures. He’s quite happy with a kilometer a day, regardless of the cost, as long as he sees the line moving west

They might have just had a nice couple of days on the yacht, swimming and having a good time, but the suggestion is that there could be national security concerns about it, or the very least that somebody in such a position of high office did not see that you can’t play around with national security, you’ve got to do it properly. Boris Johnson likes making his own rules and being a bit of a groundbreaking politician, and that’s fine when you’re announcing a new housing or education strategy, but you don’t mess with national security: you have to do things properly. I think he was extremely unwise to think that such a move was acceptable.
Russians, both general public and officials alike, are now gloating that this will happen to anyone who tries to “destroy Russia”. Is that a warning that’s going to affect Western leaders such as Macron and his ilk?
I think people now look at these bombastic statements that come out of the Kremlin, and quite frankly, laugh. They used to laugh diplomatically, when the cameras were off. Now they’re openly laughing. I mean, these statements are meaningless. This is just a bunch of old men, almost exclusively in Moscow, who see themselves in some sort of cosplay pantomime from the 1960s, something from the Cold War. It’s boring. Dmitry Peskov is wheeled out every day as a Kremlin spokesman, and he throws this insult and that insult, and there’s always, “Oh, watch out, we’ll come and get you!” Boring. They haven’t updated their language; they haven’t updated their ideas; they’ve not updated the view of the world to keep up with the pace of society and the changes going on around them and in their own society. There’s increasingly a young society in Russia, who, if they’re able to access free information, look around, and they see other people getting on with their lives and embracing technology and embracing new ideas and new cultures, and they see they’re being left behind. It’s sad to see, it’s a horrible thing, because Russia is a wonderful country currently being led by a bunch of gangsters who think they’re in some sort of black-and-white movie.
On to Ukraine’s frontlines now – Wednesday was the first day since the beginning of the war that Russia neither claimed to have nor was assessed to have made any territorial gains. What conclusions can be drawn?
Russian forces have said that they’re on an operational pause. I think they’re exhausted, they’ve lost a huge amount of fighters and equipment, as has Ukraine. Russia has used up a lot of their better equipment, which is why we’re seeing old T-62s being brought out of retirement. They’ve also used up a lot of fighters, certainly their best ones, in the Ukraine theater; they’ve drawn men and equipment from around the Caucasus to the north and Kherson to the south to fight this battle in the Donbas. And even then, they were just having to grind forward, barely a kilometer a day, very, very heavily led by artillery, absolutely pulverizing the place and then moving in afterwards to metaphorically plant a flag on the rubble that remains. So they do need this pause. Perhaps it has been forced upon them by Ukrainian tactics and the flow in the last few weeks of heavy artillery, the HIMARS systems, the very long range, very precise artillery system that is targeting the Russian ammunitions supply and headquarters. If you deny Russia access, either destroying their ammunition itself or access to it by destroying the railways, it can’t proceed. We know Russia has a very top-down leadership model, it doesn’t allow low-level initiative at the battalion or company level: Those on the ground have to wait for the big decision to filter down through the chain of command. So, if headquarters are destroyed, then the orders are not received, and nothing is acted upon. I would imagine Putin wants his army to keep going. He doesn’t really care about casualty figures. He’s quite happy with a kilometer a day, regardless of the cost, as long as he sees the line moving west. But I would have thought that if he was listening to any military advice at all, and there’s absolutely no evidence that he is, it would be that the army needs to rest for a few weeks.

The pause is also good as Ukraine is also extremely tired. They’ve been fighting a very hard war for months now, and they are in need of recuperation, to rest and fix their people and their equipment. The longer they can hang in there, the better, and the more they’ll be able to train people and take delivery of these very high powered and precise weapon systems.
Of the Lugansk retreat, you wrote that the Ukrainians have achieved their goal to “slow the Russian advance, make the enemy pay dearly for every mile gained, and get out without being decisively engaged.” But then, they do have to reclaim those territories at some point. Do you see that happening? At what cost?
It’s a bold decision to trade ground for time, to make the gamble that you will preserve your fighting power to come back another day and take that ground back. And, of course, there are no guarantees in war. But all the messaging from Ukraine is that they will take it back. Let’s say Russia takes the Donbas and then sues for peace and says, “All we wanted to do was protect the Russian speaking people in the east of the country, and we’ll just hang on to the south. We’ve no territorial aspirations over the rest of the country, you’re perfectly safe.” Who’s going to believe them? They’ve been camped out in the east of the Donbas since 2014. The Ukrainians know that they’re in a fight for their very existence, so they’re not going to stop now. There’s no chance they’re not going to go back and seek to push Russia back, at least to the February 24 boundaries.

And this would be a victory for Ukraine?
Well, victory is a very loaded term. I don’t like talking about victory in the big sense, like winning and losing. I keep getting asked who’s winning and losing this war, and I say “China,” and people look at me in a bemused fashion. You could argue that all Ukraine has to do to win is survive. Russia wants to destroy this democratic, sovereign, independent, successful former Soviet country on its doorstep, and it cannot allow Ukraine to be used as an example.
Interview by Vazha Tavberidze
Tags: Boris JohnsonDominic NichollsGeorgiaRussiaTelegraphUKUkraineVazha Tavberidze
ShareShareTweet