Does ISIS still Pose a Threat to the Region? 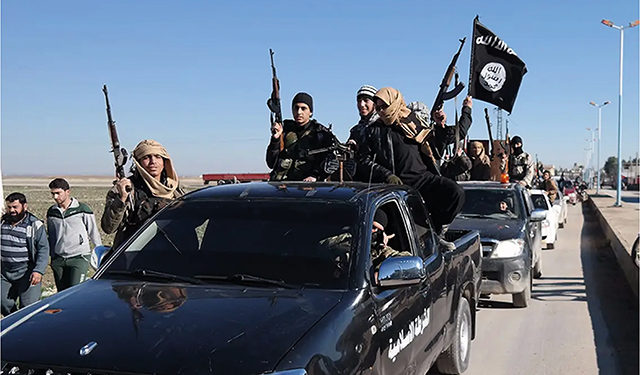 Islamic Fighters stage a motorized rally in Syria during the height of their command of the region in 2015. The majority of the fighters would go on to be eliminated in a joint NATO-Iraq offensive in the coming years. Source: Militant website via AP

Many of the attacks, kidnappings and murders the Islamic State organizations have been infamous for have largely abated. Through a combined NATO, Iraqi, and Kurdish offensive, their former strength has been reduced to a scattering of small camps and safe houses in rural Syria and Iraq. However, forces deployed in the area are still finding themselves in the crosshairs of the remaining fighters. Since much of the attention has shifted away from the battlefield, this has allowed for a steady stream of attacks on both security forces and civilians.

Georgia has largely stayed safe from the extremist threat, with a comparatively small number of citizens being involved. Despite this, there have been arrests of individuals seeking membership and training in the terrorist organization. In addition, reports during the height of the Syrian and Iraqi conflict found several Georgian citizens within the ranks of the captured and killed fighters. With the recent arrest of five suspected recruits in eastern Georgia, it brings the threat of the terror army back into the spotlight again.

The terrorist organization was reported to have attracted over 40,000 recruits from 120 different countries. Through its funding programs of illicit oil sales, smuggling, looting, and extortion, they were alleged to be reaping over $80 million per month at their 2015 height. Once the so-called Islamic State came crumbling down, many of the foreign recruits that had survived were left to find their own way back to their homelands. The homelands of these individuals were largely split into two camps; repatriation and prosecution, or outright refusal.

However, the majority of the approximately 30 Georgian volunteer fighters have elected to remain in Iraq or Syria. Georgia being a low-priority target in terms of value, the lack of any real terror network established in the nation, and the heavy-handed repercussions that await them at the border have seemingly discouraged them from returning. Despite these factors, not all have made their new home in the Middle East. Akhmed Chatayev, who fought in Syria against the coalition, is one notable example of one that returned to Georgia only to die in a firefight with police special response teams in 2017.

Although Chatayev was not Georgian himself (being Chechen), he was a leader in one of the many Chechen Muslim extremist groups in the North Caucasus. This reveals another incentive for returning fighters to find themselves a home in Georgia. With the country being a key gateway to the Southern Russian region, it has been a travel route for centuries. The terrorist threat in Chechnya and Dagestan has plagued Russian internal security forces for decades, even leading them to attempt to blame Georgia for housing them. As a result, it is highly doubtful these returning fighters will attempt to enter Russia, lest they be arrested immediately.

This incident, as well as several others in the Pankisi and Lopota areas, has highlighted the region as a potential hideout. In addition, its low-profile location could allow it to become the next petri dish for extremist fighters looking to evade capture or death. These groups, often working under the name Islamic State – Caucasus Province (IS-CP), operate according to their violent ideology and in much the same ways as their predecessor, the Caucasus Emirate.

While their primary target is often Russia in their push for North Caucasian independence, the natural link between like-minded groups on both sides of the mountain pass is cause for concern. In the wake of the 2015 rise of the Islamic State in Syria, the confederation of insurgent groups in the region openly aligned themselves with their new leader, Abu Bakr Al-Baghdadi. By supplying personnel and resources to the fight in Syria and Iraq, they were also able to grow their own influence, attracting in-house talent in the region.

However, after the fall of the Islamic State in Syria and Iraq, their influence waned, and the clashes with Russian security forces further weakened them, as leadership was either apprehended or killed. In addition, Georgia found itself dealing with their multiple associated factions, such as the aforementioned Lopota incident in 2012. This incident, leading to the death of two members of the police special operations group and one Georgian Special Operations Forces medic, underlined these subversive operations.

In the aftermath of the firefight that took place, multiple extremist organizations in the North Caucasus lashed out at Georgia. They published multiple grievances, including claims that Georgia was “betraying and killing the brave sons of the Caucasus” in favor of a Putinist agenda. Russia painted the incident as proof that Georgia was in fact harboring terrorists, and even went so far as to postulate that Georgia was training them as well.

Regardless of the true allegiance of the dead fighters, it is clear that there exist separatist and non-state organizations in the region whose goals are perpendicular with those of the nation. While these organizations may title themselves with various labels, they generally fall under the larger IS-CP banner, similar to sister organizations in the Philippines, across Africa, and what is now brewing in Afghanistan. Their presence in the South Caucasus has yet to rise to the level of any of these regions, however, the ground is not infertile for this type of ideology to spread.

Continued accruement of intelligence, surveillance, and reconnaissance should be employed. These groups will use any opportunity, such as political division or extreme nationalism, to draw new members. These individuals, disillusioned by the warped vision of the terror group, will easily fall into their trap. As with many things, an ounce of prevention is worth a pound of cure.

Georgia has already sacrificed several military and police service members in its bid for safety against the terrorist threat, both at home and abroad. The mainstream elements of the Islamic State in the Middle East may have mostly withered and fallen from the headlines, but their followers are still festering in other corners of the world. The so-called “ISIS” threat is still a threat. Georgia is not absolved of its duty in combating this group, and its many offshoots, and it’s focus on the internal security situation is commendable, but not complete.