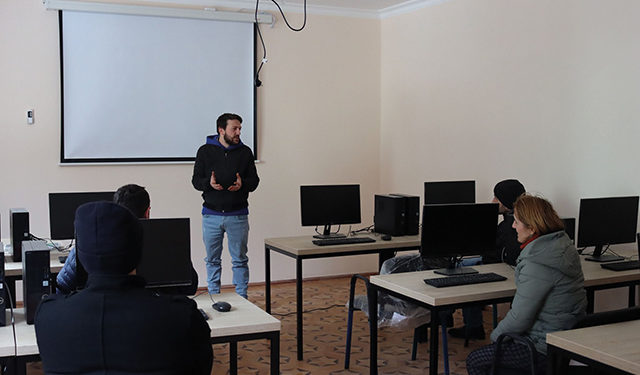 “The centers will become advantageous for both civilians and civil servants, to train and retrain their digital skills, gradually making the communication between the government and the people easier, while bringing more technological modernity to Georgians in the regions.”

Civil engagement is a must for a democracy. In countries like Georgia, where older generations are more often than not still far from technology-friendly, especially in the regions, institutes’ growing dependency on digitalism poses a big problem, since these people cannot participate in the nation’s civil life as much as they would like to. In light of the global pandemic, and with many jobs switching to remote working, this issue has become more evident than ever.

With the above in mind, through its program ‘Good Governance for Local Development South Caucausus’ (GGLD), GIZ (The Deutsche Gesellschaft für Internationale Zusammenarbeit) is supporting its partner municipalities to establish digital literacy and citizen engagement centers, aiming to make “the wonders of technology” accessible to all.

“The idea is that we want citizens in the regions to possess adequate digital literacy and knowledge in order to be able to communicate digitally with both local and central government,” says GIZ representative Tornike Darjania.

He adds that the idea came about because, as the pandemic started and the municipalities actually moved to remote work, it led to a certain “paralysis.”

“Let us suppose there is an active citizen who has to travel 15 kilometers from their village to the municipal administration just so they can submit a request to repair the local road, and now, due to the pandemic restrictions on social gatherings and in-house working, they are unable to do so,” Tornike explains. Only this hypothetical person is not hypothetical: there are numerous citizens who have faced this problem.

So, the question for partner municipalities was why don’t we use digital capabilities? The answer came that we cannot use them as people are simply not ready to digitally interact with local government and central government, because they do not have the necessary skills to do so.
From there, the idea arose to support the partner municipalities in building a digital literacy and citizen center, and three of them are already ready to open in Telavi, Rustavi, and Keda. 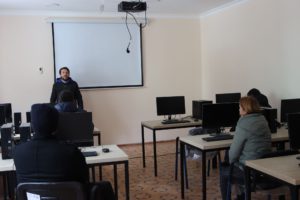 “These are the spaces that the municipalities have allocated, and we have supported their renovation and equipping with the necessary technology, like computers and computer desks, making a place where it is possible for a citizen to come and get different types of information through digital literacy training.

“In addition, various digital courses will be offered remotely. People in their own regions will be able to take courses remotely, and will no longer need to go to Tbilisi,” Tornike says. “These centers will also be used for employees of the municipality to gain knowledge and training. So, the centers will become advantageous for both civilians and civil servants, to train and retrain their digital skills, gradually making the communication between the government and the people easier, while bringing more technological modernity to Georgians in the regions, which in the end promotes more participation in local decision-making processes.”

The Digital Literacy & Citizen Centers are now complete, and municipalities plan to open their doors from March 1 and start various trainings.

“Another advantage is that this space is equipped in such a way that the training can be held from Tbilisi. Conventionally, 10 people will sit in a training room in Keda, 10-10 people in Rustavi and Telavi, and we can get involved from Tbilisi and conduct a training for people in three regions simultaneously, remotely,” Tornike tells us, visibly excited about this opportunity. “These people will be able to fully prepare for local economic and social life. We all agree that the 21st century is difficult to live in without digital skills, while local governments are being reformed to move to a form of electronic government.”

Since 1992, with the funding of the German Federal Ministry for Economic Cooperation and Development (BMZ), GIZ has been actively supporting Georgia in the areas of good governance and democracy, sustainable economic development as well as environment and climate change, among other areas. On April 1, 2020, the new regional technical assistance program ‘Good Governance for Local Development South Caucasus’ (GGLD) implemented by GIZ was launched. Being a strategic partner to the Ministry of Regional Development and Infrastructure (MRDI) and the Ministry of Finance of Georgia, GIZ continues its assistance to foster citizen-oriented local self-governance and regional development reforms in Georgia.
In the future, if similar initiatives appear in other municipalities, GIZ says it would support the creation of digital literacy centers in other Georgian regions. The priority is set for the future choice of regions.

“I think we should support setting up similar centers in regions that will be motivated, and where they have the most difficulty in this regard,” says Tornike.

Local governments hope that this will be a platform that will do good for the civilian life of municipalities, and their habitants.