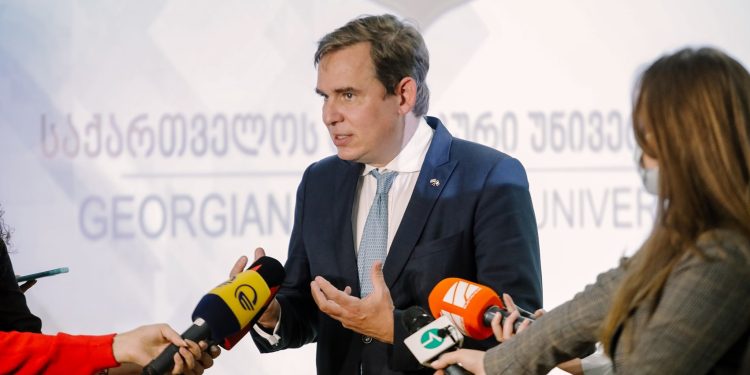 Diego Callas, the French Ambassador to Georgia, raised the alarm about recent anti-western sentiments and continued attacks on Kelly Degnan, the United States Ambassador, in an interview with InterPressNews.

The Ambassador voiced disagreement on anti-western statements and persistent rumors that the US wants Georgia to join the conflict.

“What I feel strongly about is that this very hostile, very aggressive anti-Western narrative is harming Georgia and its interests. It is very often absurdly inaccurate and wrong,” he stated.

“What they say about the so-called second front is completely false. There was never a request to do such a thing. Many statements are inaccurate and, generally, these anti-Western statements are shocking,” he added.

Ambassador Callas discussed the continued assaults on the US Ambassador.

“I find the attacks on US Ambassador Kelly Degnan, who is a friend of mine and someone I have enjoyed working with, very troubling,” he said.

“As I have already told you, I think it is very important for Georgia now to ensure that the reform agenda, which has been launched and has become dynamic since this summer, and which I appreciate, is not jeopardized by problematic narratives and negative news,” he added.