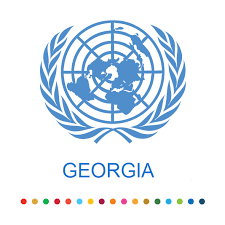 Today, on the International Day against Homophobia, Biphobia and Transphobia (IDAHOBIT), we reiterate our solidarity with the lesbian, gay, bisexual, transgender, queer and intersex (LGBTQI+) community in Georgia. LGBTQI+ persons remain among the least protected and most marginalized in Georgia. They face discrimination and violence, which often are underreported, while the protection and realization of their rights remain a challenge.

We regret that as in previous years, considerations of safety and security prevent people from openly showing their solidarity with the LGBTQI+ community and raising their voices against homophobia, biphobia, and transphobia in Georgia.

We wish to stress that the Government of Georgia is responsible for safeguarding the right to peaceful assembly, preventing discrimination and violence, and ensuring that everyone in Georgia can commemorate IDAHOBIT openly and publicly in full confidence that their rights and safety are duly protected.

We take note that several individuals were sentenced to prison terms for their involvement in the shameful events of 5 July 2021 that led to the disruption of the March for Dignity and resulted in violence against LGBTQI+ persons and the media. We urge the authorities to bring all instigators and perpetrators of violence to justice.

At the same time, we welcome that a growing number of Georgian citizens support diversity and believe that protection of human rights of LGBTQI+ persons is important. A recent survey points towards a continued increase in the percentage of Georgians who consider restrictions of the right to assembly and expression for LGBTQI+ communities unacceptable and believe that the State does not respond adequately to acts of violence and discrimination against the LGBTQI+ persons.

State policy and practice must align with Georgia’s international commitments and respond to these social changes by duly ensuring that LGBTQI+ rights are effectively protected, including through the forthcoming National Human Rights Strategy and Action Plan. Enhanced social protection measures are needed to support vulnerable LGBTQI+ persons struggling with food and housing insecurity, an elevated risk of homelessness, and barriers in accessing healthcare.

We urge Georgian state, political, civic, and religious leaders to spare no effort to fight discrimination, stigma, and violence within their respective areas of responsibility, including by embracing respectful and compassionate public discourse and engaging in constructive dialogue with LGBTQI+ communities in seeking solutions to the most pressing challenges.

We stand united for the right of all people to live free and equal in safety and dignity and remain committed to supporting the people of Georgia in building an inclusive society that empowers and protects all its members.