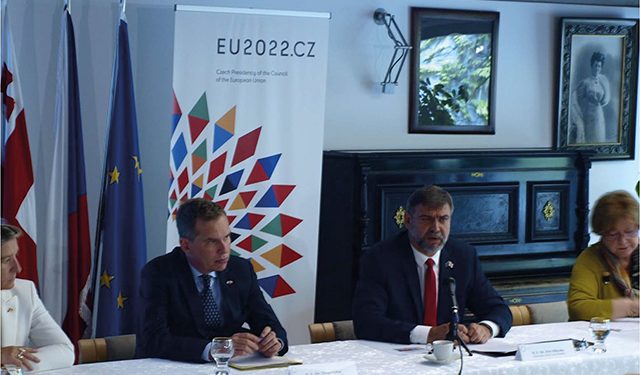 As the Czech Republic, also known as Czechia, begins its Presidency of the Council of the European Union, the ambassador of the country presented an outline of the Council’s priorities. Czechia’s second turn at the helm of the EU Council began on July 1, and is a part of the so-called “trio program.” This program consists of France, Czechia, and Sweden, and was developed to deal with the aftermath of Covid effects on society and the economy of Europe.

However, after the Russian invasion of Ukraine on February 24 changed many of those priorities and necessitated a fundamental reassessment of Europe’s future. The incoming Czech Presidency of the Council has European security and stability at the core of its initiatives. While a “green and digital transition” of the Union’s economy is still imperative, addressing the threat that Moscow poses to the Union and the side effects of the ongoing war take center stage.

The incoming presidency has adopted a motto from Former President of the Czech Republic, Václav Havel. The former statesman’s vision of “Europe is a task – rethink, rebuild, repower” frames the idea that Europe is a leader in elevating values for the individual. Embracing this vision, the Czech Presidency divides its priorities into five pillars that support both the immediate concerns as well as the ongoing long-term mission of the European Union.

The first pillar is based on managing the Ukrainian refugee crisis and the future plans of rebuilding the war-torn country. Similar to the post-WWII Marshall Plan, the reconstruction of Ukraine’s infrastructure and potential for European Union membership will all have to be reckoned with when the hostilities cease. This is also tied to the commitment of strengthening EU solidarity in the face of Russian aggression.

A crucial component of this is the second pillar: energy security. With much of the Union being dependent on Russian oil and gas imports, a shift towards partnerships with more friendly and non-authoritarian nations will take place. An important cornerstone of this is the “REPowerEU” aimed at mitigating the economic and social impact of exceedingly high energy costs.

Next, the new Czech Presidency will build upon the collaborative EU and NATO efforts to fortify a holistic approach to European security. Sharing of resources and working together on enhanced cybersecurity initiatives, this will be coupled with strengthening EU industrial capabilities and implementation of NATO’s Strategic Compass program.

This leads to their fourth pillar of economic resilience. A focus on deepening internal EU markets and promotion of the free market in member and partner states lies at the core of this pillar. This is amplified by accelerating the rate of economic digitization in outlying sectors of the European markets.

Finally, the last pillar aims at strengthening European democratic institutions. According to the Czech Embassy, this is about “safeguarding values of democracy, Rule of Law, media freedom, transparency, and open dialogue with citizens.” The reinforcement of these pillars and the principles Petr Mikyska, the Czech Ambassador to Georgia, outlined will define the Presidency through the rest of 2022.

Geographically, the incoming Presidency will be focusing on several regions. While the development of the transatlantic partnership and ongoing defense cooperation with NATO focuses on Europe and the United States, other regions still remain within their scope. Ukraine and Eastern Europe, particularly, as Moldova and Georgia assume new guidance regarding EU membership, will likely be at the top of the Presidency’s agenda.

Other regions of the Indo-Pacific and the Sahel of Western Africa remain priorities. This is particularly important with ongoing NATO and American security concerns in these areas, and as the EU has paused their operations in the Sahel after difficulties with an alleged Russian mercenary presence complicating relations with the host nations.

The decision by the Union regarding the membership pathways for Ukraine, Moldova, and Georgia will sit with the Czech Presidency as well. This mission with the Eastern Neighborhood partnership will begin with building a concrete enlargement plan for the EU. The Czech Ambassador also ensured he elaborates on the other potential member countries in the Western Balkans.

The Czech Presidency has already announced over 2,000 working groups and ambassadorial meetings that have been planned, with a significant portion of events taking place in Czechia. Additionally, already 50 meetings with other EU member states and partners with the Presidency’s leadership and 320 political events are scheduled in the Czech Republic to promote unity, partnerships, and the mission enshrined in the five pillars. In the capital of Prague, 14 ministerial informal Councils are set to take place to reflect the aforementioned priorities.

The geopolitical, economic, and security environment for Europeans has become significantly more complicated since the beginning of 2022. The incoming Czech Presidency, while they admit that their priorities are broad, remains committed to the five pillars they have laid out. During a speech at the European Parliament, Czech President Petr Fiala summed up this commitment by stating, “the six-month presidency is indeed a short time. However, I can assure you that the Czech Presidency is ready to play its role actively. We are ready to focus on an open dialogue, to seek compromises and functional solutions in cooperation with other EU institutions.”