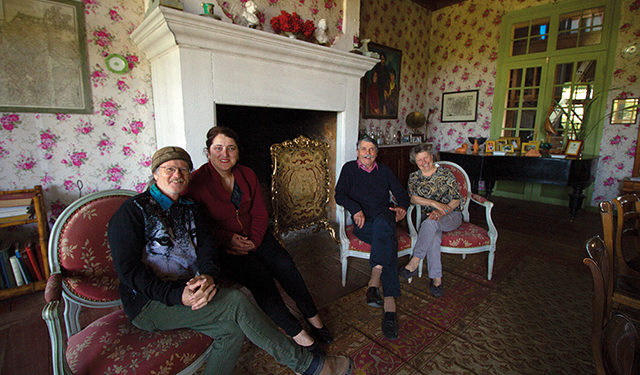 Holidays had been announced for early May, long enough for my wife and I to consider a long trip. Her father’s year memorial since death was upcoming; we would see family in Kakheti, other friends there, and also stop to take stock of our newly renovated flat in Tbilisi.

Going by our own car gives us the freedom to move at our own will, and to take and bring back a lot more things. Gifts for family and friends, things for the new apartment, our own clothes and more. Public transport is being curtailed in Georgia at the moment anyway, in order to combat The Virus during Orthodox Easter’s traditional time of large gatherings in homes and cemeteries. While I don’t have a CityPark license for the car in Tbilisi, we will park it where we can.

Our first stop was with royalty. He is descended from both the Napoleons and the Dadiani princely family of Samegrelo (Mingrelia); she can trace her family tree back a thousand years. Both Alain and Veronique Murat are French-Georgian citizens settled in rural Georgia, rebuilding his ancestral home and doing a lot of humanitarian work too, especially in Svaneti. Their neighbor has been a plumber in our house in Etseri, and he introduced us to them.

I will have to write much more about this couple and their story. They have lived in Georgia for 20 years, similar to my own time, and saw a lot of the chaos of the late Shevardnadze years, as well as the changes since for better or worse.

The house, once containing nearly 20 refugees from Georgia’s awful collapse and their livestock, has come a long way in restoration since the Murats were able to move in. It sits on a hill-edge outside Zugdidi from which you can see the Black Sea on clear days. Sheep, geese, ducks and turkeys all coexist on the land, with its large expanse of close-cut grass and rare old trees.

Virus aside, there are plans to enlarge tourism and hospitality services, and obviously the situation offered by this couple is unique. We had supper at a large wooden table from Napoleonic times (the 200th anniversary of his death is May 5) which could seat 10 or 12 comfortably, served by Their Highnesses. Collections of local factory porcelain and glass, as well as papier-mâché folk art, ancient maps and furniture, and a Napoleon on every wall, completed the décor. A massive fireplace could roast a sheep or pig on a spit if it had to. The walls were covered with cloth instead of wallpaper; generally, each room had the same cloth as that on its walls making up curtains and other accessories, tying the whole room’s design together.

The Murats are involved supporting poor families in Svaneti and elsewhere with clothing and other aid brought in from France, and we have started to connect with this endeavor in Etseri as well. One issue will be who can take up the baton in future years, as they are both in their seventies.

We were fascinated to hear how things had been when they started in Georgia, and what they have gone through, including a fire in a different house in Zugdidi which took everything in the place but left them alive. They have also had long contact with Georgia’s orphanages, which have come from deadly, Romanian-level awfulness in the 1990s to de-institutionalization of many of the children and return to their own families. The battle is far from over, but at least we are no longer seeing children lying in their own filth, dying of malnutrition or even simple starvation. Millstones await the necks of those who treat “these little ones” in such a manner, to be cast into the depths!

It is heartening to see people from a high station stooping to serve as they can. Fully aware of who they are and where and whom they have come from, they are not afraid to roll up their sleeves and get into the challenging job of humanitarian work. Their diplomatic and other top-level connections also give them some advantages in this, but it is always a struggle nonetheless.

Salut, our dear new friends, and we look forward to whatever we can do together to help!