Crisis in the Lachin Corridor 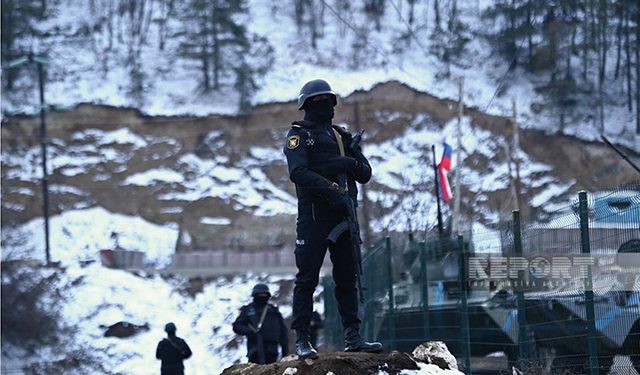 While Europe plans its winter moves in support of Ukraine against the ongoing war with Russia, another crisis has erupted in the South Caucasus. Old rivals Azerbaijan and Armenia have once again begun accusing each other of provocations, but this new ongoing incident could raise new questions as to the role of Russia in the region. Hesitant to take definitive action, Russian peacekeeping troops and Azerbaijani security forces met in the contested Lachin Corridor.

On December 12, large groups of Azerbaijani civilians gathered at a Russian peacekeeping position along the key road that connects the regional capital of Stepanakert to Armenia proper. While small in number, they carried signs demonstrating that they opposed the reported mining operations carried out by Russian-backed Armenian companies. Pro-Baku sources described these protestors as environmentalist groups, angered by the allegedly illegal mining.

Photos of these protests showed them holding signs in Russian, English, and Azerbaijani, reading “Illegal Excavation is a War Crime,” and “Exploitation of Mineral Deposits=Money Laundering.” More videos surfaced showing the arrival of additional protestors and Azerbaijani security forces. Special response police and Ministry of Internal Affairs troops arrived, even interacting with the Russian troops, albeit with weapons tucked away.

Several members of the protest groups showed the “gray wolves” hand gesture. This hand gesture is particularly offensive to Armenians, as it is perceived as racist and a reminder of genocidal actions from history. Sight of its use led many in Yerevan and other pro-Armenian enclaves to respond harshly to these actions, with many claiming that not only are these violent provocative actions by Azerbaijan, but also that these protests are not what they seem.

Armenian sources claim most, if not all, of these alleged protesters are special services, SOF, or other government-backed operatives from Baku. Their mission is to discredit the Russian peacekeeping force, demoralize the Armenian people and military in the region, and ultimately force Russia to withdraw their peacekeeping force from the region altogether. This, as they claim, would allow for further militarization of the area and potentially offensive operations into Armenia-controlled Artsakh, as well as Armenia proper.

All of this increasingly troublesome tension caused Armenian Prime Minister Nikol Pashinyan to convene an extraordinary meeting of his Security Council. While Baku remained largely silent, the Armenian Foreign Ministry issued a firm statement on the matter. “This behavior of Azerbaijan not only demonstrates its lack of intention to address the issues of the rights and security of the people of Nagorno-Karabakh and to hold a dialogue with Stepanakert for this purpose, but also once again testifies to the fact that Official Baku continues pursuing the policy of ethnic cleansing towards Nagorno-Karabakh,” they said in an official release.

With these accusations from Yerevan, Baku responded in short time with their own release. Hikmet Hajiyev, Azerbaijani Foreign Policy Advisor to President Ilham Aliyev, said that “The Lachin road is blocked not by Azerbaijani protesters, but by the Russian peacekeeping contingent. Representatives of civil society in Azerbaijan are trying to stop the illegal transportation of looted natural resources, but do not interfere with the movement of other civilian vehicles.” Both sides, from official and unofficial sources, have criticized the efficacy of the Russian deployment.

In addressing the concerns of the protesters, referred to as environmentalists by pro-Baku sources, the Azerbaijani foreign ministry insisted that they were exercising their right to protest. “The protests of the members of the civil society of Azerbaijan and environmental activists on the Shusha-Lachin Road is the result of the rightful dissatisfaction of the Azerbaijani public,” they said. While this political war of words continued, bus-loads of additional protestors arrived at the growing roadblock. Azerbaijani and Turkish flags adorned the area, with Russian peacekeepers likewise growing in number.

Since these statements, an estimated 1,500 people have gathered at the checkpoint. More tents, food deliveries, heating, and quality-of-life equipment has been delivered, reportedly delivered via donations from local pro-Azerbaijan businesses in the area, especially in neighboring Shusha. Meanwhile, massive lines can be seen in Stepanakert (capital of Armenia-backed Artsakh) of civilian cars filling up and saving additional fuel, as Azerbaijan has reportedly cut gas service to the area.

Sources from inside Artsakh have been advised by the government to conserve fuel, limit the use of electricity, and preserve what medical supplies they have. Hospitals have stated online that they are only days away from exhausting their resources, potentially endangering patients if things continue. Yerevan, in response, has made it public that they are seeking international assistance, most notably from France and the United States.

The potential for this to spark another confrontation between the historic enemies is real. Armenia has already alleged that this tactic is a move by Baku to use their special services, disguised as civilians, to lure both Russian peacekeepers and pro-Armenian groups into another war. Azerbaijan, mostly silent on this matter, has backed the protestors and blamed Russia for mishandling the situation. As Russia loses footing in its sphere of influence, this may force the hand of Moscow to take a different path in the South Caucasus.

With the Kremlin’s influence eroding away as its failures in Ukraine grow, Azerbaijan is likely probing the field for weakness. Armenia, having still not transitioned fully from Russian support, is vulnerable, as, despite arms deals with India, growing diplomacy with France and the European Union, and commitments by Yerevan to overhaul the military, this would likely not come in time. Baku may make real on its vague promises to secure Armenia’s southern Syunik (Zanzegur) Corridor and connect with the Nakhchivan Autonomous Republic, without Armenian interference.