“The bail, as a measure of restraint, should be replaced by detention.” – Judge Nino Chakhnashvili

Tbilisi City Court satisfied a motion of the Prosecutor’s Office and ruled to use the pre-trial detention measure against Nika Melia, Chairman of the opposition United National Movement party.

With this decision, Chakhnashvili fully satisfied the motion of the General Prosecutor’s Office of Georgia.

The trial of Nika Melia lasted for 6 hours on Wednesday. The court discussed the revision of the measure of restraint against him. The accused himself was not present at the trial as a form of protest and distrust toward the court.

The Prosecutor’s Office applied to Tbilisi City Court with a motion to change the measure of restraint yesterday after the parliamentary majority supported the investigative agency’s motion to use the detention measure against the opposition leader with 88 votes in favor and two against.

Melia was arrested for refusing to pay the 40,000 GEL bail set last year.

He was charged with incitement of violence during the June protests back in 2019, and was released on bail in November. He should have paid the bail by December 24, 2020 but did not. By the court’s decision, Melia also had to wear a monitoring bracelet, which he removed publicly during the street protests. 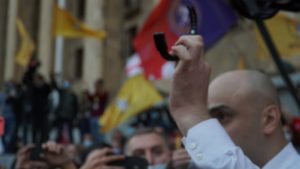