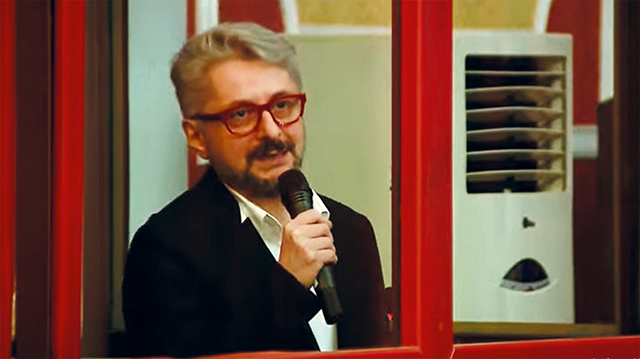 The Tbilisi Court of Appeals’ judicial panel this week gave its decision in the criminal case brought against Nika Gvaramia, Kakhaber Damenia, and Zurab Iashvili.

The General Director of Mtavari Arkhi channel, Gvaramia was given a prison term of three years and six months by the City Court on May 16.

The Prosecutor’s Office charged Gvaramia with “abuse of authority against the legal interests of the broadcasting company and use of a large amount of money belonging to him in his official capacity” while he was the director of Rustavi 2.

On November 2, the General Director of the Mtavari Arkhi channel received a prison sentence and an additional charge from the Tbilisi Court of Appeals.

Regarding the incident of increased punishment, which has to do with the aspect of damaging the company, Gvaramia was fined 50,000 GEL. In the second instance, the Prosecutor’s Office took the same stand, and Nika Gvaramia was given the term of 3 years and 6 months in jail. The prison sentence stays the same because the terms run concurrently.

Damenia was deemed guilty by the Tbilisi Court of Appeals, whereas Iashvili was acquitted of all charges.

Due to Iashvili’s acquittal, both the bail and the property seizure were lifted. He also has the right to request that damages be repaired.

Damenia was found guilty in accordance with Article 220 and given a 50,000 GEL fine.

After asking the court for information, the “Georgian Democracy Initiative,” an organization working to enhance the nation’s democratic growth, learned that between 2017 and 2021, nobody was given a prison sentence under this article.

After declaring the Gvaramia case verdict, Tbilisi City Court Judge Lasha Chkhikvadze was pulled from the scheduled program in the US by the US Embassy. This incident further fuels public concerns about Georgia’s lack of judicial independence.

The initial detention of Gvaramia drew criticism from both domestic and foreign sources. His arrest has been seen by Georgia’s civil society and opposition as a direct assault on the free press, democratic ideals, and ambitions toward the country’s Euro-Atlantic future. Concerns over Gvaramia’s conviction and sentence have also been voiced by President of the European Council , Charles Michel. The detention of Gvaramia has also drawn criticism from a number of MEPs.

“If there were still decent, honest citizens who had any illusions that under this regime it is possible to put our country on the right path, return to the free world, solve the fundamental issues of democracy, this is the end of those illusions. We all want the freedom of this political prisoner, but at the same time we all understand that if the regime decides to release Gvaramia for a trade, even this will not change the essence of our great national problem,” he added.

The Public Defender expressed extreme concern regarding the judgment delivered by the Tbilisi Court of Appeal against Gvaramia.

“We remind the public that back in 2019, the Public Defender applied to Tbilisi City Court with a micus curiae brief regarding the so-called advertisement episode. According to the Public Defender’s assessment, it was inadmissible to convict Nika Gvaramia for making a managerial decision (the so-called advertisement episode), which could have theoretically become the subject of a civil law dispute but should not have become the basis for criminal prosecution.

“Unfortunately, the court of the first instance found Nika Gvaramia guilty and did not take into account the fundamental principles of separation of civil and criminal liabilities. The Court of Appeal, instead of correctly evaluating the mentioned legal issues, made an even more severe decision and used imprisonment as a punishment against Nika Gvaramia for the action, which, in its content, is covered by civil law and there is no evidence in the criminal case that would prove the action to be criminal,” reads the statement.

The Public Defender noted that the Court of Appeal upheld the decision of the court of the first instance regarding the conviction of Nika Gvaramia in the so-called car episode. The Public Defender remarks the judgment of the court of the first instance was problematic in that episode as well adding, on the one hand, the issue was similar to the so-called advertisement episode from the point of view of corporate law, and on the other hand, it was completely unfounded in relation to the substantial circumstances.

“The Public Defender’s Office has already applied to the Tbilisi Court of Appeal and demanded access to the judgment. Upon receiving the reasoned judgment, the Public Defender will additionally present a detailed assessment of the case to the public.

“The Public Defender reminds the public that on June 8, 2022, she appealed to the President of Georgia and, taking into account the substantial shortcomings of justice, called on her to use the power to pardon in response to the violated rights of Nika Gvaramia,” reads the statement.

The Ruling Party also responded to Wednesday’s ruling, with Chairman of Georgian Dream Irakli Kobakhidze noting that if the President of Georgia pardons Gvaramia, it will be “an insult to the institution of the President.”

The United States Embassy in Tbilisi noted in a Facebook post that at a time when Georgia’s commitment to impartial judiciary and media pluralism is being “closely reviewed,” the continued imprisonment of Nika Gvaramia “puts at risk the clear choice of the people of Georgia – and Georgian leaders’ stated goal – for a more secure, democratic European future.”

The United States Embassy reiterated its “deep concern” regarding the Court’s decision in the case of Gvaramia, Iashvili, and Damenia.

“Numerous international and Georgian human rights defenders have raised significant questions about this case from the start, including about the timing and charges, as well as the conviction and sentence,” noted the Embassy.

“Even the perception of selective investigations, prosecutions, and convictions diminishes the public’s confidence in law enforcement, the prosecution, the courts, and the government itself,” it.

The post underlined that the United States will continue to support media freedom and the judicial reforms which are “necessary to build the stable, prosperous democracy the people of Georgia have clearly said they desire.”

The spokesperson of the External Action Service of the European Commission issued a statement regarding the Tbilisi Court of Appeal verdict, noting that the European Union is closely monitoring this case.

“The European Union does not comment on the merits of individual court cases, but we note once again that questions have been raised, including by the Public Defender, in relation to this case.

“In this respect, we recall that ‘stronger efforts to guarantee a free, professional, pluralistic and independent media environment, notably by ensuring that criminal procedures brought against media owners fulfill the highest legal standards’ represents one of the priorities identified by the European Commission.

“The EU will continue to support Georgian authorities in reforming the judiciary with a focus on the independence, transparency, and quality of judicial procedures indispensable for upholding the rule of law.

“The European Union remains committed to supporting Georgia in addressing all 12 priorities in order to live up to the European aspirations of its citizens,” reads the statement.