Could Wars Be Avoided? 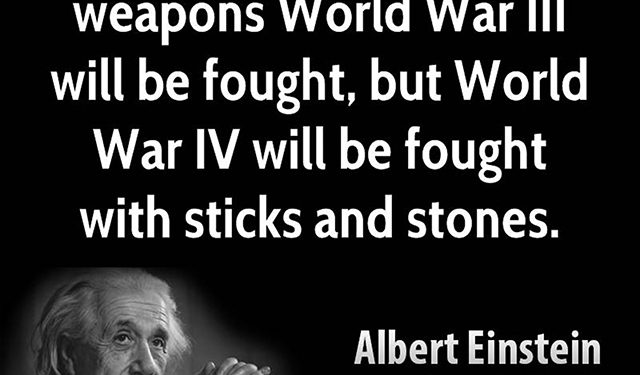 Albert Einstein – ‘I know not with what weapons World War III will be fought, but World War IV will be fought with sticks and stones.’ I’ve been taking this famous quote by the genius very seriously since the Russian president’s recent verbal threat of nuclear assault resonated throughout the world. Scary, wasn’t it?
To bring my negatively-impressed self to senses, I went to one of wonderful Albert’s more encouraging thoughts that peace cannot be kept by force but can only be achieved by understanding. These words fill my boggled mind with some confidence that wars can be avoided if Man starts thinking more rationally and a little wiser than, let’s say, in the time of Mongolian invasions 700 hundred years ago, which resulted in 60 million deaths. Incidentally, the Second World War went something over that figure, which means that Homosapiens have not changed their attitude about violence as such in the thousands of years they have been around. Isn’t this funny? We are still killing each other with the same medieval ease and determination, all the while raising the gravest questions about modern human behavior.
The thinking part of the world might still remember that in the recent past, the well-known brief encounter between United States President Donald Trump and North Korean Leader Kim Jong-un gave impetus to a frightening awareness that Mankind is moving closer to a nuclear war. Putin’s hot remark (let’s reservedly call it ‘remark’) on the same subject has strongly substantiated that ominous presumption. Auspiciously, the scientific forces in the field of psychological research are not idle and seem to be optimistic when it comes to the question of whether wars could be avoided.
Provided the answer to this question is positive, another one pops up forthwith: How to do that? How to actually prevent war and make our beautiful earth a safer place to live? Well, if in the past several millennia, Man has not been able to get its act together and find a way to establish stable peace on planet Earth, how could a regular contemporary researcher do the job overnight? But “There is Still Hope, Brother” – this is the optimistic phrase in the finale of the 1959 Stanley Kramer’s post-apocalyptic science fiction drama film ‘On the Beach’, depicting the aftermath of a nuclear war. Having seen that movie, one would not only not threaten their fellow planet-dwellers with nuclear attack, but would never think about it even in their most vicious imagination.
Writing this, I certainly have in mind the current Russian-Ukrainian war and the possibility of avoiding it if the parties to it, as well as their outside ‘helpers’, had acted more wisely and more rationally, as a result of which the unwanted and totally unjustified bloodshed could have been prevented. I will only attempt here to construct a hypothetical model of a happier development of events: A healthily and pragmatically thinking third party was found and assigned by the international community to take on a logically-strong mediation- honestly, professionally and perseveringly looking for solutions to the dispute between USA-NATO and Russia to resolve the prolonged prewar conflict between them. In doing so, said mediator tried to let both Russia and Ukraine save face and maintain a positive moral image, not letting any of the sides lose sense of their long-earned international authority. The chosen mediator was moderately successful in building trust, encouraging communication among all actors in the given version of prewar interaction, being sure that all parties had a genuine trust of the mediator. The mediator arranged give-and-take exchanges between the conflicting parties, reducing hostilities and building trusting relationships with final conflict-defusing mutual proposals.
The extant psychological research suggests that distrust can be reduced and peace promoted if conflicting nations or groups are engaged in specific cooperative ventures with mutual benefits, and the mediating interventions are most effective when they involve interactions, considering equal status, common goals and cooperation. More attention needs to be given to developing and implementing prevention strategies that remove the conditions for conflict and war, which was not verily done by America, NATO and Russia before the war became inevitable. Adopting preventative strategies based on cooperative ventures with mutual benefits is invaluable. The social network threats can simply fuel the fire of conflict, but well-thought-out strategies for mediation and cooperation may well help to extinguish it. And there is no doubt whatsoever that prevention is better than cure.