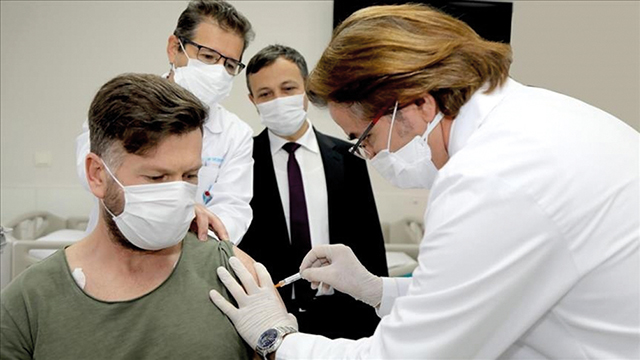 The same statistics put the Isle of Man in first place, with a total population of 84,500 and an average of 103 new daily cases of coronavirus.

In second place is Fiji, with 1,013 new cases reported daily. Fiji is followed by Botswana, where an average of 1,871 new infections are reported per day. In fourth place is Cuba, with 8,924 cases per day.
Regarding the daily death rate according to the weighted data per 100,000 population, Georgia is in 11th place from the end. Only Cuba, Indonesia, Myanmar, Ecuador, Paraguay, Fiji, Botswana, Namibia, Tunisia and the British Virgin Islands are ahead of Georgia in terms of mortality.

On August 8, the UK will be putting Georgia on its Red List, alongside Mayotte, Mexico and Reunion, meaning British nationals visiting these countries will have to pay over 1700 Pounds ($2400) for a stay in a quarantine hotel on returning home.

This week, the alarming increase in newly detected coronavirus cases is especially notable. Georgian capital Tbilisi remains a hotspot in terms of the virus spread, as almost half of the cases detected daily are recorded there, followed by the Adjara and Imereti regions.

On Monday, Georgia reported 1655 coronavirus cases, 2286 recoveries, and 23 deaths, with 20,661 tests conducted. Georgian capital Tbilisi recorded the highest number of 701 Covid-19 cases.
Since Monday, the number of newly detected cases has been increasing due to a larger number of tests conducted.

Georgia reported 4827 coronavirus cases, 1895 recoveries, and 34 deaths on Tuesday, with 43,932 tests conducted. Tbilisi recorded the highest number of 2297 Covid-19 cases, followed by the Adjara region with 634 cases, and the Imereti region with 494 cases.

Georgia reported 4233 coronavirus cases, 1934 recoveries, and 38 deaths on Wednesday, with 45,229 tests conducted. Tbilisi recorded the highest number of 1924 Covid-19 cases, followed by the Adjara region with 591 cases and the Imereti region with 518 cases.

The test positivity rate on the day stood at 8.76%, and it was reported that the daily vaccination rate had risen by some 4000 persons per day to an average of 20,000.

Given the alarming statistics, epidemiologists and government officials constantly urge the population to get vaccinated, claiming it is “the only way to end the pandemic.”

However, distrust in the vaccine is still high in the country, a fact confirmed by the latest survey conducted by the International Republican Institute (IRI), indicating that Georgians are increasingly hesitant to take the COVID-19 vaccine. The survey shows that the majority of respondents, 45%, would not get vaccinated against coronavirus, which is a six-point increase from IRI’s February 2021 poll.

Amiran Gamkrelidze, Head of the National Center for Disease Control and Public Health (NCDC) reported that the center analyzed the fatalities in 2021 and determined that 99.7% of dead persons were not vaccinated.

He noted that the possibility of infection is 0.3% among fully vaccinated persons, and 0.9% among those who had received their first jabs.

The NCDC Head spoke about the significance of immunization and the worsened epidemiological situation and said control would be reinforced on wearing facemasks indoors.

The NCDC recommended allowing fully vaccinated people or those with negative PCR test results into social events, festivals and receptions.

“If the acting regulations are not executed, then we will consider the imposition of stricter restrictions due to the worsened epidemiological situation based on all indicators and parameters,” Gamkrelidze stated.

The Covid-19 Delta strain will become dominant in Georgia from the end of August, says allergist-immunologist Bidzina Kulumbegov, noting that management of the pandemic with the given daily number of coronavirus cases is critical, especially while the majority of the population remains unvaccinated. Wearing facemasks should be mandatory both indoors and outdoors.

He noted that the current situation is “tragic,” and the daily death toll might reach 50 if regulations and sanitary norms are not strictly observed.

The Situation Worldwide
More than 4 million new cases of Covid-19 infection were detected worldwide last week, a 3% increase on the previous week, seeing up to 64,000 people dead, the WHO said on Wednesday.
The growing trend is largely due to the increase in cases in the Eastern Mediterranean and the Western Pacific, where the number of new cases of infection has increased by 37% and 33% respectively compared to the previous week.

WHO says the highest number of new cases of infection, 543,420 cases, were detected in the United States, which is 9% more than the number of cases reported last week. Then comes India with 283,923 new cases, which is 7% more than last week, followed by Indonesia with 273,891 new cases (though 5% down compared to the previous week), followed by Brazil and Iran.

In addition, the organization’s weekly report states that the new variants of coronavirus continue to spread around the world.

The Alpha strain, which was first identified in the United Kingdom and is therefore referred to as the “British variant,” has been identified in about 182 countries around the world, the Beta (“South African”) variant is in 132 countries, the Gamma (“Brazilian”) variant has been found in 81 countries, and the Delta strain (“Indian variant”) is currently recorded in 135 countries around the world, including Georgia.

The situation has relatively improved in Turkey, which has begun to ease restrictions after enduring a major spike in cases in the first half of 2021, which led to a 17-day lockdown at the end of April. As of July, it has scrapped its nighttime curfew and Sunday lockdowns, and has begun to tentatively reopen.

“Turkey’s death toll stands at 51,124, with nearly 5.6 million cases registered. After a tough first year, the situation has improved markedly following a number of strict lockdowns and restrictions on socializing. The country has seen daily case numbers fall to around 22,000 (down from a record 823,000 in December 2020). It has fully vaccinated over 30% of the population as of July 29,” reports CNN.