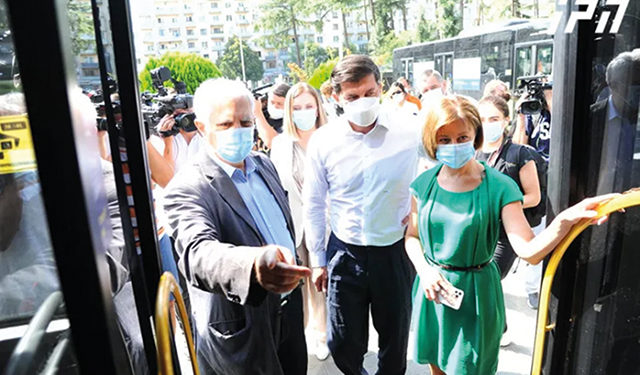 Recently, following the introduction and extension of various restrictions, the epidemiological situation in Georgia has seen a slight improvement once more. The decrease in new cases reported daily is notable; however, the death toll remains relatively high, with 70-80 fatalities reported daily.

Georgian capital Tbilisi, along with Adjara and the Imereti region, remain hotspots in terms of the virus spread.

Georgia reported 4778 coronavirus cases, 4753 recoveries, and 79 deaths on August 31, with 43,741 tests conducted. Georgian capital Tbilisi recorded the highest number of 1888 Covid-19 cases, followed by the Imereti region with 608 cases, and the Adjara region with 423 cases.

The Restrictions
Considering the epidemiological situation, this week the government announced the following decisions regarding safety regulations:

• The restriction on municipal public transport will continue until September 13;
• The education process in schools and universities will be conducted remotely from September 15 to October 4;
• Kindergartens will not start functioning until at least October 4. This applies to both private and public gardens.

The Vaccine
To stimulate the vaccination process, vaccination centers have been opened in specially outfitted buses in Tbilisi, where one can get vaccinated without prior registration.

The Global Situation
The pandemic situation worldwide is still a concern, mostly due to the rapid spread of the Delta strain.
UK Covid deaths topped 200 daily for first time since March. About 94% of people in the UK have coronavirus antibodies, either through vaccination or past infection, new data suggests.

Measures to limit the spread of coronavirus, such as masks and social distancing, have been lifted in England, but regular testing remains.

“There are mixed emotions as pupils return to schools across England,” reports the BBC. “However, places with rising case numbers, such as the South West, require school and college pupils to wear masks in communal areas for the next five weeks.”

The Delta-driven COVID-19 surge made August one of the worst months of the entire pandemic globally.

The US reported almost 4.22 million new coronavirus cases in August alone, making it the fourth-worst month for infections, with 26,805 Americans dying of COVID-19, more than three times the July total. The last week of August was deadlier than all of July.

At the latest pace, an American is dying of COVID every 1 minute, 5 seconds. Every minute, another 111 Americans are testing positive, nearly two per second. Compared to the last week of July, there were 105% more cases and 268% more deaths in the final week of August.

Rising infection numbers come as the more contagious Delta variant becomes the dominant form of the virus, making up 99% of all cases in Germany, RKI wrote, adding that there has been an increase in the incidence rate in Germany since the beginning of July, particularly noticeable people between the ages of 10 and 49.

Heading into that fourth wave, 63.7% of the German population have received at least one vaccination dose, while 58.2% are fully immunized.

Georgia’s neighboring Russia also faces a renewed coronavirus surge, health officials warn. Though Russia’s Covid-19 infections have stabilized around 18,000 per day in recent weeks, the country is still grappling with a record-shattering third wave, also driven by the Delta variant, that started in early June. Despite the country recording several all-time high Covid-19 death tolls, the most recent on August 26, authorities have continued to lift restrictions.