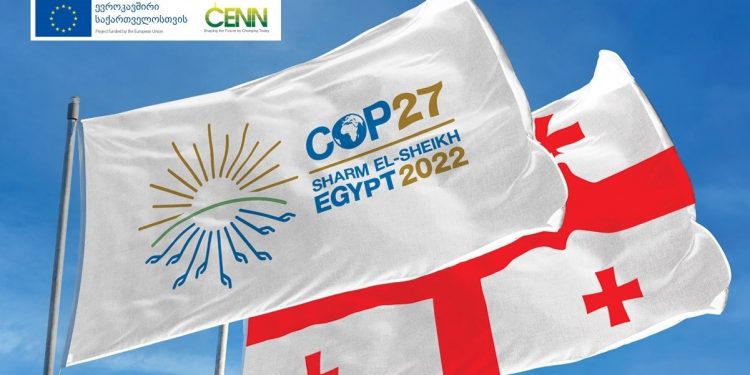 The 27th Climate Conference for Parties (COP) to the United Nations Framework Convention on Climate Change (UNFCCC) will take place in Sharm El Sheikh, Egypt, from 6 -18 November. It will be yet another chance for world leaders, politicians, experts, and many other different groups among international society to discuss climate crisis on a global level.

In a world faced with a growing energy crisis, record greenhouse gas concentrations and increasingly extreme weather events, COP27 aims to build on the outcomes of COP26 to deliver action on an array of issues critical to tackling the climate emergency, from urgently reducing greenhouse gas (GHG) emissions, building resilience and adapting to the inevitable impacts of climate change, to delivering on the commitments to finance climate action in developing countries.

Upon approval of the Paris Agreement in 2017, Georgia joined 191 Parties and committed to contribute towards the goals of the Paris Agreement: Among others, to hold the global average temperature increase well below 2°C, and to pursue efforts to limit it to 1.5°C compared to the pre-industrial level. Under the Paris Agreement, Georgia has a commitment to formulate an “Updated NDC” at least every five years. In addition, Georgia is expected to show progression with regards to emission reduction targets or policies and measures with each update, and to strive for net-zero GHG emissions in the second half of the century.

In 2021, Georgia adopted the Nationally Determined Contribution (NDC) and submitted it to the Secretariat of the UNFCCC, setting an unconditional climate mitigation target of 35% below the 1990 level of its domestic total GHG emissions by 2030. “Domestic” excludes emissions from land-use, land-use change, and forestry. Georgia has also committed to a target of 50-57% of its total GHG emissions by 2030 compared to 1990, with international support.

In order to ensure fulfilment of the NDC targets, Georgia developed the National Climate Change Strategy 2021-2030 and Climate Action Plan 2021-2023. The Strategy presents climate actions across sectors to deliver the NDC objectives, with the focus on achieving Georgia’s climate mitigation targets, while the Action Plan includes detailed measures and investments, roles and responsibilities, output indicators and estimated costs, and sets out the climate change mitigation policy in the following sectors: Energy Generation and Transmission, Energy Consumption in Transport, Energy Consumption in Buildings, Energy Consumption in Industry and Industrial Processes, Agriculture, Waste Management, and Forestry.

“It is positive that Georgia has adopted these key strategic documents: the NDC, Climate Change Strategy and Action Plan to fight climate change,” notes the Ambassador of the European Union to Georgia, Pawel Herczynski. “Now, it is important to make sure that these are implemented and that all sectors of the economy contribute to the common objective defined by the NDC. The European Union and Team Europe are happy to support Georgia in reducing its carbon impact through the provision of expertise and investments in sectors such as waste management, water management, climate smart agriculture, sustainable rural development, and energy efficiency. It is also our common responsibility, living in this beautiful country, to improve our behaviors to reduce our carbon impact, and to protect our health and the unique nature around us.”

The goal of Georgia’s NDC is to support the sustainable and balanced development of the country, equally taking into consideration climate change, environmental and socio-economic challenges, yet, as Nana Janashia, Executive Director of CENN, points out, “the implementation of NDC objectives is still slow and needs more coordinated and persistent action across all sectors, as well as active climate communication and engagement.”

With this in mind, we asked Nino Thandilashvili, Deputy Minister of Environmental Protection and Agriculture of Georgia (MEPA), what Georgia’s goals will be at this year’s COP event.

“At COP27, Georgia will concentrate on promoting the initiatives declared by our country at COP26, as well participating in different working groups and platforms of the conference to enhance Georgia’s position,” she tells us.

We asked her what expectations Georgia has, and what others have of Georgia.

“COP27’s main target will shift from pledging to implementing, now that Article 6 (carbon markets) of the Paris Agreement is complete and operational. The conference will concentrate on goals that clarify support measures for loss and damage from climate catastrophes, make finance flows a reality, and ensure a managed and just transition to an economic model based on low-emission and climate-resilient development,” she notes.

“The linking and delivery of climate finance and implementation will be the main challenge and something to look ahead to. Georgia’s main priority is to ensure equitable geographical representation within the constituted bodies of the UNFCCC, something which we proposed at COP26,” Thandilashvili tells us.

On Georgia’s motivation, she says: “Georgia is a member of Eastern European countries group, which is made up of both developed and developing countries. For various reasons, in many UNFCCC mechanisms, this group is under-represented, which makes it problematic for countries like us to be heard.

“However, we believe that efforts cannot be effective unless the perspectives of developing countries in all regions of the world are considered. Therefore, at the COP26 negotiations, Georgia underlined that working groups should take into account the principle of equitable geographical representation.”
Maia Tskhavaradze, Head of the Climate Change Division at MEPA, adds to this point.

“The highest priority for us is to ensure ‘Equitable Geographical Representation under the Constituted Bodies under the Convention,’ and we expect intensive negotiations in this direction at COP27,” she notes.

“This item is important not only for Georgia, but for all Eastern Europe and Non Annex 1 (developing) countries. Currently, developing countries of our region are entirely excluded from membership to the Technical Executive Committee, and we have less access to membership on the Standing Committee on Finance and the Warsaw International Mechanism Executive Committee than the developing countries of every other region. Although we will continue to negotiate to reform these bodies on an ad hoc basis, Georgia believes the only equitable way to prevent such discrimination in the future is to address this issue in an overarching way,” she says.

“At COP26, the parties reached a common vision on carbon market development, with the spirit of establishing robust enabling mechanisms for private sector engagement,” she says. “And Georgia already took steps toward this when we signed bilateral agreements with the Swiss Confederation and Japan regarding carbon trading. Georgia is a member of the Article 6.4 Supervisory Body, and there will be a lot of work ahead for us to operationalize this mechanism effectively.”

“In order to increase the adaptive capacity of the country, we have started scaling-up the Multi-Hazard Early Warning System and the Use of Climate Information in Georgia, which includes development of hard and soft infrastructure, as well as Data Management for EWS operations,” MEPA’s Maia Tskhavaradze notes.

We ask Nana Janashia and Nino Thandilashvili how they rate the business, civil and education sector engagement towards climate change processes in Georgia to date.

Business sector engagement
“The business sector has an enormous role in driving global climate change,” Janashia tells us. “Achieving the ambitious, aspirational long-term goals of the Paris Agreement will require a major increase in effort by the business community in reducing greenhouse gas emissions, developing and deploying technologies, delivering finance, building resilience and pursuing adaptation. A growing number of new businesses in the world have focused specifically on green and clean sectors. However, there has been relatively little attention on the crucial relationship between businesses and the government for climate implementation in Georgia. Hence, the business sector’s engagement in addressing climate change and promoting green growth is still low in Georgia. Challenges for private sector engagement on the environment include a lack of evidence on environmental and economic outcomes and a lack of benefits to addressing environmental issues e.g., cost savings and reduced risks.”

Therefore, she adds, it is “high time” that the government engaged the private sector to mobilize green investment, promote green private sector development, and harness skills and knowledge for addressing climate change in Georgia.

“Efforts should include developing clean infrastructure, reducing energy and water use, improving the climate resilience of cities and communities, and supporting natural capital and ecosystems,” Janashia concludes.

“Business sector activism towards climate change is increasing,” Thandilashvili tells us. “MEPA actively seeks consultations from different stakeholders, among them from the business sector, during the development of different strategic documents or laws and regulations.

Civil sector engagement
“Civilian engagement in climate change processes has been active for a number of years, and it is only increasing,” Nino Thandilashvili tells us. “Non-governmental organizations actively participate in climate-related activities, in some cases as opponents to the Ministry, in others as partners,” she says.

However, Nana Janashia thinks that “Civil engagement in national climate policy design and formulation in Georgia is rather low due to a multitude of reasons: lack of understanding of climate policy processes, institutions and actors; weak strategies for policy engagement; lack of valid data and inadequate use of evidence; poor communication approaches; and working in an isolated manner and a limited capacity over policy influence. CSO engagement at the local level in the country’s regions is even lower.

“The levels of civil society development in Georgia are different,” she adds. “Common characteristics of the vast majority of CSOs include poor skills, low competencies and no experience due to insufficient development support and a lack of local initiatives. CSOs in the regions tend to be more focused on service provision and do not engage in policy development, as they lack the necessary skills, incentives and resources to do so. Institutional stability and financial viability continue to be a challenge for CSOs due to limited access to information, networks, qualified professionals and other critical skills and resources.”

She notes the work CENN, with the EU-supported project EU-CAP, has been doing to combat these challenges.

“CENN works nationwide and engages with CSOs and other actors at national and local levels in 10 municipalities of the four target regions of Guria, Imereti, Racha-Lechkhumi and Kakheti, to create and empower regional multi-stakeholder Climate Action Groups (CAGs) and launch locally-owned participatory processes for increased climate resilience and improved water security,” she tells us.

Georgia’s Targets
By 2030, Georgia plans to mitigate the GHG emissions from the transport sector by 15% from the reference level; Georgia’s updated NDC supports the development of low carbon approaches in the building sector, including public and touristic buildings, through encouraging the climate-goals oriented energy efficient technologies and services;

By 2030, Georgia plans to mitigate the GHG emissions from energy generation and transmission sector by 15% from the reference level; Georgia’s updated NDC supports the low carbon development approaches of the agriculture sector through encouraging climate smart agriculture and agritourism;

Georgia’s updated NDC supports the low carbon development of the industry sector through encouraging climate-friendly innovative technologies and services, in order to achieve 5% of emission limitations comparing to emissions projected by the reference scenario;

Georgia’s updated NDC supports the low carbon development of the waste sector through encouraging climate-friendly innovative technologies and services, and through effective implementation of separation practice and principles of circular economy;

By 2030, Georgia intends to increase the carbon capturing capacity through the forestry sector by 10% compared to 2015 level; Georgia’s updated NDC sets the implementation period for Climate Change Strategy and Action Plan between 2021 and 2030, through identification of individual mitigation measures contributing to achievement of the sectoral goals.

With its updated NDC, Georgia takes a commitment to fairly contributing to the global efforts against climate change, taking into consideration national circumstances, resources and capacities. Georgia recognizes that it is vital for the world society to share the required efforts against global warming in a fair and equitable manner.