Citizens Continue to Protest against Construction of Namakhvani HPP 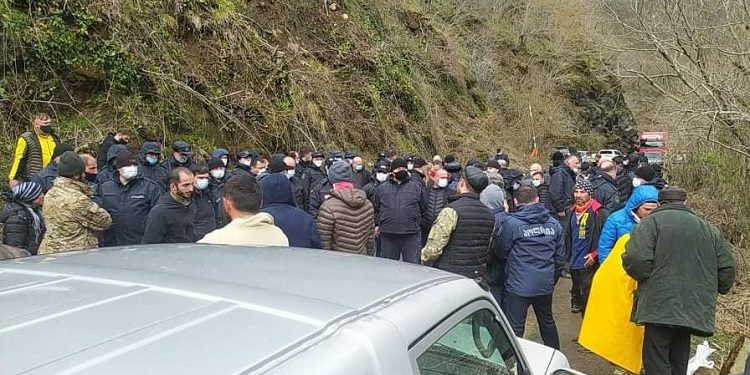 The local population and civil activists continue to protest against the ongoing construction of the Namakhvani hydropower plant (HPP) in the western Georgian region of Imereti. Protesters believe that the construction of the HPP poses a serious danger to the environment.

On April 3, two protesters were detained during a clash with police at the rally on the ground. Law enforcers are mobilized in the gorge where the HPP is being built, and the construction works continue under strict police monitoring.

Against the background of the strong local resistance, authorities claim that the reason for the sincere concern about the safety of Namakhvani HPP has been removed, as the construction of the dam has been postponed until further examinations are carried out.

Economy Minister Natia Turnava stated in mid-March that in agreement with the investor, the construction of the main elements of Namakhvani HPP, dam and reservoir, will not start until the basic surveys are verified. However, she noted that the company will continue to build the road and “secondary elements.”

Recently, the Minister’s remarks were spread by the press service of the Ministry of Economy and Sustainable Development, where she notes that currently, the company is carrying out only road works within the framework of the authority granted by law. However, the locals claim that the construction is actually underway now.

Civic activist Davit Katsarava has also reported that the company in charge of the construction, Turkish Enka Renewables, which has a new director, Merab Lominadze, continues its works under “strong police protection.”

The Namakhvani HPP is to be built in the Tskaltubo and Tsageri municipalities north of Kutaisi. Continuous protest rallies have been held on the ground with locals and environment activists demanding the suspension of the construction. However, despite the intense criticism around the ongoing project, state officials often claim that “the country needs to use its own energy resources for more economic independence.”

Related Story: Economy Minister: Construction of Namakhvani Dam, Reservoir Will Not Start Until Surveys Are Verified