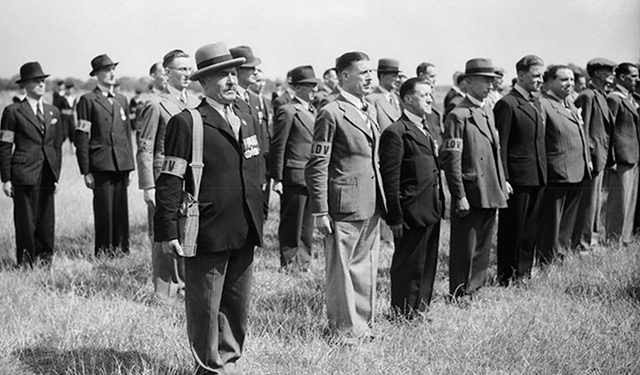 There once was a time and place that having a united man, woman, and child was sacred to the defense and protection of their neighborhood, the city, and ultimately the state. Hand-to-hand combat and combatives, crowd control, medical, homemade explosives, classic Spanish-style guerilla warfare, and even counter-intelligence were taught to the adult and junior population, just as arithmetic and chemistry is taught today.

That place was Great Britain. These patriotic souls filled themselves with the vigor needed to not just firmly defend, but forcefully defy a foreign usurper. This was the British Home Guard, active from May of 1940 to the end of 1944, and they trained and prepared to defend home, hearth, and Crown, until their end. Georgia could perhaps take a page from this lesson.

After the massive retreat of British, French, and other allied forces from Dunkirk in June of 1940, coupled with the surrender of France, Great Britain found itself in a terrifying position. An immense amount of arms and vehicles had been left to the advancing German army, leaving the island nation to defend its own shores on what was seen as an impending German invasion of England.

At the time, the threat of invasion was real. The German High Command had even begun planning an amphibious assault titled ‘Operation Sea Lion.’ The Home Guard held multiple responsibilities should the Whermacht come ashore, many of which Georgia should consider with the inevitability of further Russian aggression.

One of the first duties of the Home Guard was the defense of key points and infrastructure in Great Britain. By assigning area defense units, manning anti-aircraft and coastal artillery, and assisting in the construction of defensive structures, the Home Guard alleviated the regular armed forces from these duties and acted as a force-multiplier. Georgian Home Guard units would operate in a similar fashion.

One of Russia’s common invasion tactics is the infiltration of the combat zone by both special operations and paratrooper units, as well as specialist mercenary teams and fifth columnists, aimed at sewing discount and fear. In support of police units, surely undermanned by a renewed invasion, a Home Guard would be available to assist in the apprehension of these Russian elements. The protection against Russian attacks would provide a rear security element as others push on, and some level of surety and morale improvement.

With bi-annual training, selected citizens would be instructed on the proper use of the relevant weaponry to protect key terrain and vital infrastructure across Georgia. In addition, crowd control of the inevitable refugee crisis would fall to the Georgian Home Guard, with the objective of protecting the civilian populace and facilitating their removal from the combat zones. Only as a last resort would they be used in direct offensive operations.

However, it cannot be said that the Georgian Home Guard would be spared the maelstrom of combat. A second mission of the British Home Guard was to simply delay the enemy so as to allow the regular forces to either regroup for combat, or to maneuver into a more favorable position.
Georgian Home Guard units that included individuals with more experience, perhaps police or military veterans, would act as a blocking or fixing force, ensuring that the Russian units and their mercenary ilk would not be able to move so freely. Meanwhile, the Georgian Army regulars would be positioned for the killing blow and artillery units would harass the enemy all the while.

The equipping and training of such a force would fall to local commanders and veterans who, with their experience and training, would be offered ample time during the year to formalize their tactics and discipline, as well as unit/neighborhood cohesion. It’s not outside the realm of contemplation that government subsidies could support training and equipment objectives.

The tactic of leaving a stay-behind force of paramilitary units and guerilla fighters to harass enemy forces was, to a lesser known extent, one of the duties of the British Home Guard. Operating from hidden locations, these units would aim to destroy enemy fuel supplies, ammunition stores, and harass invasion forces to reduce morale and readiness. The Georgian Home Guard would almost mirror this mission, and take further inspiration from NATO’s Cold War plans, ‘Operation Gladio.’

Comprised of former military, experienced outdoorsmen, and those with exceptional technical skills, small units would operate in underground teams to disrupt the invader from within. With the aim of sabotage and subversion, it must be understood that these brave individuals would need to operate outside traditional wartime norms, and in a legal grey area. However, it could easily be surmised that this would be preferable to Kremlin rule.

These units would not be able to be organized in the traditional sense, with a military hierarchy and uniformity, but in relative autonomy, collaborating only when the mission called for it. Additionally, they would provide immensely valuable intelligence and reconnaissance for a liberation force before and during a counterattack against Russian forces.

History is rife with examples of this tactic. As a recent example, the invasion of Iraq was constantly hampered with surprise attacks in the form of small ambushes, critically placed explosives attacks, and even going so far as assassinations of key local collaborating officials working with the foreign force. With the same tactics applied against a Russian occupation, their position as occupier can become untenable and unsavory, particularly to the Russian citizens at home, already unhappy with their government’s actions against a beloved neighbor.

A Georgian Home Guard would be a monumental undertaking. The organization, leadership, and seasonal training would fall to more local-level leadership. This would open the way for differences in tactical operating procedures from one unit to the next, morale issues, and supply nightmares. However, it cannot be said that the nation wouldn’t benefit from the revival in patriotic fervor found in one serving, even in such a small way.

From a legal perspective, there are certainly some questions to be had when an irregular populace takes up arms during war. The British Home Guard made it a point to have, and gradually evolve the issuance of, service uniforms, as well as insisting on their use during Home Guard activities. While this isn’t a total absolvement, it does formalize these Home Guard units as a uniformed albeit paramilitary force. As stated, the consequences of serving in the irregular capacity is certainly preferable to life under the Russian boot.

At an organizational perspective, the order would need to have a main directorate office with connections to the Ministry of Defense or Internal Affairs, but with enough disconnection to avoid vulnerability during wartime. Indeed, perhaps a separate office should be instated so as to maintain this disconnect. However, at the tactical level, it would be the district and neighborhood commanders that would be responsible for decision-making in combat and operations. Equipment and supply would largely be self-sustainment in nature, and encouragement of arms and equipment procurement should be widespread.

Russian military build-up along the Ukrainian borders should send a chill down the spine of every European, including Georgians. This fear should be harnessed and formulated into a comprehensive defense stratagem that includes not just military and police units, but civil defense and popular resistance organizations. This type of asymmetrical “partisan” warfare is one of the few that keeps even Russian commanders awake at night.

While Russia will never openly admit it, the true fear of the Russian army is becoming consumed in another Chechen-esque war, complete with endless guerilla action, asymmetric warfare, and a resilient populace. Georgia should be that thorn bush that the Bear dare not involve itself with, lest they die the death of a thousand small cuts.

During the height of Georgia’s medieval power in the 11th and 12 centuries, the army employed the use of a light infantry unit composed of civilians banded together for defense. This flexible and highly mobile force was known as the Qrma. This light force was able to outmaneuver heavy enemy armies and blend back into the population when necessary. Now, much of the national defense strategy is centered around the professional Georgian Army. While they have modernized greatly in the past decade, the defense of the nation against a superpower such as the Russian military machine cannot be placed solely on their shoulders.

The Russians already mix their offensive strategy with light and irregular forces, and it is time a similar force was mustered to counter this. Georgia should invest time and effort in structuring a Home Guard with the goal of civil and infrastructure defense, asymmetric warfare against an occupation army, and banding the people together for the common defense of the nation as a whole in times of need.