China, and the Russia-West Rivalry 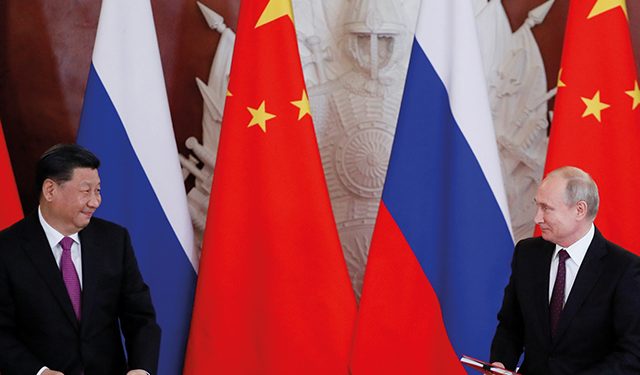 The Russia–West struggle is seen as defining in modern geopolitics, but China’s approach to this rivalry is little discussed. For China’s imaginary map of the Eurasian landmass, the lands lying to the west, from Xinjiang to Portugal and Scandinavia, is the space where China’s rise to pre-eminence will be played out. Deeply jutted into the Eurasian continent, China’s geography makes the country highly vulnerable to potential instability in Central Asia, Afghanistan, and Russia. And though it is often argued that China’s economic rise is the most important aspect of the quickly changing world order, it should be also said that economic progress, albeit grand in scale, could not alone reshape the world. As any aspiring great power in world history before, China would also need opportune geopolitical circumstances on the Eurasian landmass to advance its Eurasia-wide interests.

One such opportunity is being provided by the Russia–West confrontation. For the Chinese, both Russia and the West fall within one category: Those which once pursued establishing a colonial presence on China’s territory and presently regarding the country’s successes as threatening. There is no outright hatred, but the vision that Russia, the US, and other western powers are not particularly happy with China’s geopolitical rise is well ingrained within the communist state’s political culture. It is thus in China’s interests to keep its Eurasian powers as divided as possible. The tradition of playing one against another is reflected nowadays in Beijing’s policy of tacitly: At times openly supporting Moscow in the latter’s confrontation with the West, whether through votes in the United Nations or deeper economic and military cooperation in the time of western sanctions imposed on Russia.

This allows China to have Russia as a distraction, since the US constantly has to dedicate time, military, and economic resources to contain Russia in Africa, the Middle East, or the Black and Mediterranean seas. This Chinese approach creates a certain chaos among the group of states which were historically prone to dominating China. In this game, Russia is a mere pawn in China’s Eurasian geopolitical calculus, whose growth of influence under Putin is not as fundamental as that of China. Thence come reservations in Beijing about potential Russia/China-led Eurasia. The different geopolitical weights of the two states preclude an even distribution of influence. China will be close to Russia as long as it helps Beijing keep the West distracted from the Indo-Pacific.

The Russia–West confrontation is also beneficial to China in the light of Russia’s policies in the Middle East. The region is economically important to Beijing, but it has traditionally been dominated by the Western powers. Over the last decade or so, Western influence in the region diminished, while Russia’s actions further disrupt America’s posture. In the long run, China could play a more active role in the resource-rich region, because of the region’s geography as one of the connection points with European market within the framework of the BRI.

A look at the map of China shows what the country’s geopolitical imperatives have been throughout most of its history. Perhaps the first goal of all successive Chinese dynasties and then the communist government has been to maintain control over the heartland, Han core, which consists of major Chinese rivers, is abundant with productive lands, and is full of people. A further logical step is the influence over zones which surround the Han core and consist of mountainous regions to the west, desert lands to the north-west, and impregnable forests in the south.

The third major imperative is to protect China’s coastline from foreign powers. In the medieval period, intermittent military naval incursions into the Indian Ocean or attempts to dominate Japan and other neighboring islands were made. It could be argued, though, that the Chinese did not see any long-term need to develop powerful naval capabilities, because external threats emanating from sea were non-existent.

Geographic barriers as well as external threats, almost exclusively emanating from the nomads in the north, limited political and trade contacts with the outside world and conditioned China’s nearly autarkic economy. China’s insularity was a significant geopolitical advantage. It provided security in ancient period and middle ages. But this was no longer a case in the twentieth century when in the age of globalization, international trade, and multiplicity of supply chains, China has to be open and rely upon raw materials from abroad via sea routes. Thence comes China’s fourth geopolitical imperative—security of international trade lines and diversification of resource bases. This will only be possible to achieve through establishing alternative land routes, such the as BRI, or building a powerful military fleet capable of protecting supply chains across the Indo-Pacific. Modern China does both, which makes it a far stronger challenge for America than what was the Soviet Union. This stresses the need to look beyond parallels with the Cold War era. The latter is a limiting framework which does not cover the whole scope of present competition between Washington and China.