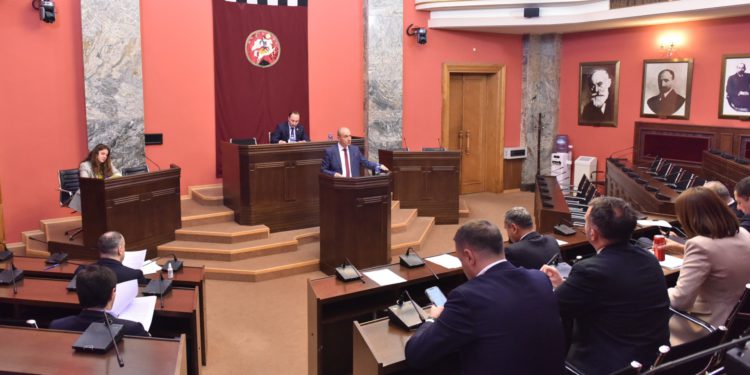 In the second reading, the Legal Issues Committee discussed the changes to the Election Code.

Guram Macharashvili, one of the initiators of the Bill, noted the law is to undergo certain amendments after its first reading in the Plenary Session, based on a general agreement struck with the opposition.

Article 135 of the Law, which establishes the terms of office of municipal authorities, would be amended, as noted in the draft law: the newly elected Assembly and its members take office on the 14th day after the CEC publishes the final protocol of election results on its official website, confirming the election of at least two-thirds of the whole composition of the relevant City Assembly;

The power of a member elected in the Assembly by-elections begins on the 14th day following the release of the final results summary protocol;

The power of the successor of an excluded member of the Assembly elected by proportional representation begins on the 14th day after the chair of the election commission issues the required act recognizing his or her credentials.

As noted in the draft, the newly elected mayor’s powers will begin on the 14th day after the final election protocol is published on the CEC’s official website.

The authority of the elected member of the Assembly, whose authority had not begun before the enactment of this legislation but whose election is certified by the summary protocol, will begin as soon as the law enters into force.

Furthermore, the power of the successor of the excluded member of the Assembly elected by the proportional electoral system, which did not begin before the enactment of this law, will take effect as soon as this law takes effect.

As Anri Okhanashvili noted, Chairman of the Legal Issues Committee, the concept is simple: residents’ interests should be protected as effectively as possible, regardless of whether they are in Batumi, Senaki, or elsewhere.

“We agreed in the debate that if there are certain challenges, we should balance these issues as much as possible and guarantee that the interests of our residents are taken into consideration,” Okhanashvili stated.