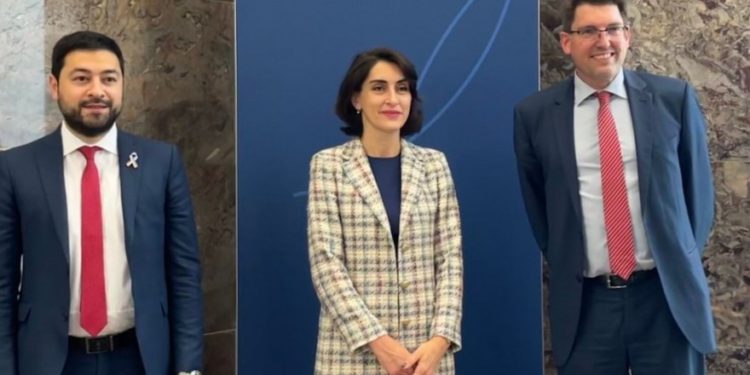 The Chair of the EU Integration Committee, Maka Botchorishvili and the First Deputy, Levan Karumidze met with the Head of Group 51 in the Federal Chancellery of Germany, Edgar Lenski, Director for Eastern Europe, Caucasus and Central Asia at the Ministry of Foreign Affairs, Matthias Lüttenberg and the Head of the EU Foreign Relations, Neighborhood Policy and Enlargement Department, Laura Ahrens.

The parties discussed the EU membership application of Georgia, the progress of the country on the EU integration path, the security challenges in the region, the Russian occupation of Georgian territories and the creeping annexation.

Botchorishvili put an emphasis on the successful implementation of the greatest part of the reforms envisaged under the Association Agreement noting that Georgia is aspired to keep further approximation to the EU standards. She underlined the importance of a clear EU membership perspective and granting the status of a candidate state to Georgia, Ukraine and Moldova against the background of the Russian military aggression in Ukraine and stressed the importance of a clear political supportive message by the EU to these countries.

She thanked the German diplomats for their intact support to the democratic development and EU approximation of Georgia. German colleagues gave a positive assessment to the EU integration steps taken by Georgia and timely fill-up of a Questionnaire. They reaffirmed the unwavering support of Germany to the European aspirations of our country.