In a cruel twist of fate, the righteous and dignified activity of the famous International Charity Foundation Cartu and its unfairly and regrettably beleaguered founder has become controversial in Georgia: on one side of her scale, Lady Justice sees thousands of people helped, many of them rescued from hunger and even from the vicious claws of death, tens of thousands aware of the Foundation’s outstanding charitable doings all over the country, and hundreds of thousands enthusiastically recognizing the significance of the free assistance to those of our compatriots who have found themselves in difficulties that would have been absolutely insurmountable without our native Good Samaritan’s goodwill and mighty shoulders. On the other side of the Themis Scales, we are looking at an extraordinarily sizable crowd of ungrateful folks that are so tightly blindfolded that they are unable to see anything positive that is taking place in the land in general, and in the field of charity in particular.

Enumeration of all the projects that have successfully been carried out by the Cartu Foundation in the last twenty years is simply impossible in this brief newspaper article, but one of them is the beautiful Abastumani Lung Center, headed by experienced pulmonologist and tireless manager Revaz Zhgenti, who told us the story of the Center’s creation and its current work.

The idea of creating the Lung Center in Abastumani belongs personally to the founder of the Cartu Foundation, who knew very well that the resort’s specific air quality is directly curative for lung diseases. Abastumani used to be one of the most famous soviet resorts, having rescued many a patient from the perfidious attack of tuberculosis. Today, TB patients have become rarer than in the past, and the place is wide open to the general public.

Just a couple of kilometers from the very heart of Abastumani, in an open, unpopulated space, on a charming hillock, stands a pretty white hotel-type three-storied construction, built by the Cartu Foundation with a whopping GEL 7 million investment which covered furnishings, state-of-the-art medical and kitchen equipment, fitness gear, and the well-nursed trees, shrubs and lawns around. The Foundation constructed the Center and transferred it into state ownership for further exploitation. 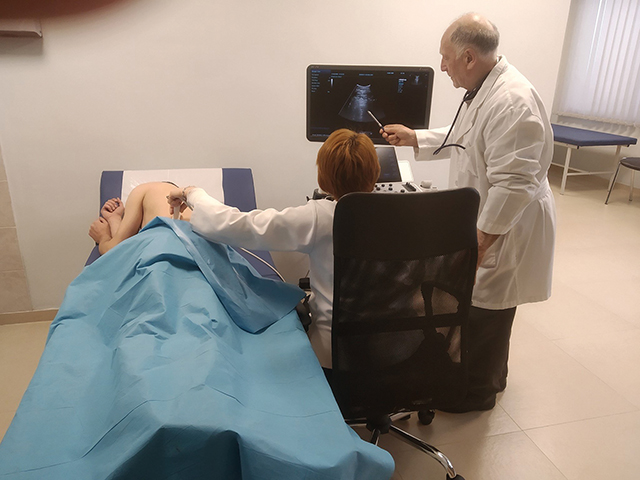 The National Center for TB and Lung Disease (NCTLD) created a special post-Covid program for the purpose of rehabilitating former Corona patients, and all this free of charge! Eligible for participating in the 20-day program is any person who has recovered from Covid-19 or one of its sub-strains, and who belongs in one of the following social groups: physically challenged persons, temporarily displaced people, socially vulnerable individuals, war and armed forces veterans, and personnel employed in hazardous and harmful jobs.

The Abastumani Lung Center was created in 2019 and has since served as the first medical enterprise of its sort not only in Georgia but in Transcaucasia too. It is staffed with perfect medical personnel, among them the 79-year old skilled and knowledgeable doctor Tamaz Jijeishvili, who spends most of his time at the Center, taking most qualified care of his patients. The Center can at a time accommodate 100 patients. The building is full of light and life, with a beautiful eating area catering to every possible appetite, and the three-meals-a-day nourishment regime is exactly what the patients of the above categories need to enjoy!

One of the most noticeable features to even the outsider’s eye is the way Director Revaz Zhgenti treats the dwellers of his health hub, and the way his fatherly care is reciprocated by the patients. The Center feels like home and family. I could not believe my ears when I heard from him that in the concert space on the upper floor, the patients were going through a dress rehearsal for that night’s amateur show, organized by Batoni Rezo for the Center staff, and performed by the patients themselves. What else might be human happiness? Believe it or not, the overall environment at the Abastumani Lung Center and its friendly spirit might even have a bigger power on restoring health than all those medications, daily inhalations and the famed Abastumani air.

I am not surprised that Revaz Zhgenti was awarded the respectable title of Honorary Citizen of Adigeni, the district where the Abastumani Lung Center belongs. He is also the winner of the 2021 Georgian Brand nomination for ‘Trust & Reputation’. The Center is successfully cooperating with various municipalities. It takes care of patients from Abkhazia, too. The Center has attracted the attention of American and German embassies, which have stated their readiness to provide financial assistance for the purchase of certain indispensable equipment. In a word, it is the worthy child of the Cartu Foundation – just a small drop in the huge bucket of its charitable deeds.