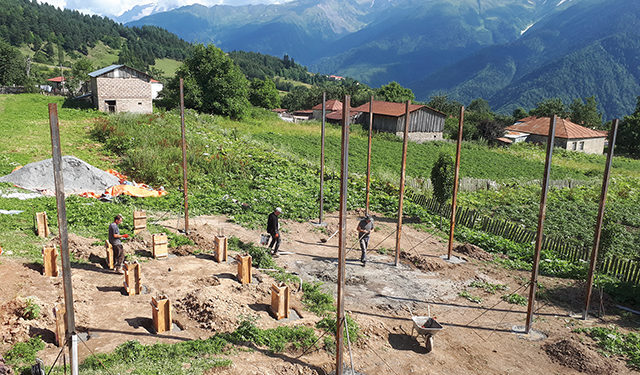 When we bought this property we live on in Svaneti in 2010, it had two buildings on its 3000-odd square meters: the house itself, and a barn, both two stories. Since then we have added an outhouse, a garage and a gazebo-type affair. Now, with the aid of a few thousand euros’ EU grant, we are adding the newest and largest structure yet: a separate café.

This edifice went through a few iterations and brainstormings on paper before emerging in its final form, which will have a dining/meeting hall, kitchen, two bathrooms, a pantry, and a balcony mainly overlooking the mountain wall to the south of us (where could be found the subject of my last week’s article). A 3rd floor to the existing house? A two-story separate building? Mercifully, the builders and I shot down both of these early ideas before they could become finalized, and our plenty large enough one-story building has become the winning version.

14 tons (green weight) of 6m wooden planks of various thicknesses have lain in a neat cross-stacked square pile in the yard for over a year, drying. A few weeks ago we had to pay a few local youths to move them only 7m uphill from where they were, as they were then in the way. Over 1000 GEL of cement in 50kg bags are currently occupying the garage; a dump-truck-load of gravel has also come from Mestia and is sitting near the site. A few thousand concrete blocks must also come up from near Zugdidi, and some sand too. Water and electricity at least we have for free.

The café is the first of our additions to feature a surveyor, topologist, geologist, bureaucracy, paperwork, and even architectural drawings. Such are the strings which come as part of the deal. Also, we are spending money which will then be reimbursed, as opposed to being given money in advance at the start or anywhere during the process. We must pay out to get back, according to the rules of this particular game, presumably so the donors can minimize the chances of money going astray; fair enough. The grant will not cover the whole thing, but will take care of a substantial chunk of it.

Our workers are three from a village outside Zugdidi which has its own prince and princess, of mixed Mingrelian (Dadiani) and French (Napoleonic) ancestry, about whom I have also written here earlier. The leader of the trio has done other work for us, and comes highly recommended, having proven himself already. We are housing and feeding them twice a day into the bargain, as they are about 100km from home, with only a partial guest season now underway. We are just at the start of building, but it’s looking good.

At the moment, they are digging square holes, filling these with concrete, and adding square cross-section steel pipes of about 6m height. These they stabilize with tripods or “quadrupods” of steel rebar and wire until the concrete dries and they can fix them in place. We now have for the first time a true sense of how large our building will be, seeing its foundation and first structures in place. It’s big.

One important issue for us will be the exclusion of local men as patrons of our establishment, as these tend to see it as a café-BAR and will want to take advantage, getting drunk on tab and making more than a nuisance of themselves to us, their families and the village in general, if not actually killing themselves or others in the process. For the same reason, we do not sell alcohol at all in our shop, restricting it entirely to our foreign guests. This problem is a common one up here, and maybe all over the country in regions or villages of high tourist visitation.

One solution is simply to make alcohol prices prohibitively high for locals and insist on only cash payment on the spot; this seems to be working for a foreign friend of ours in another nearby village who is also the owner of a hotel and restaurant. We will not even advertise the bar aspect at all, either. Time will tell how these approaches work. I have no desire to see anyone getting plastered on my property, having seen enough of the ugly effects of this to last a lifetime or several.

In any case, we will likely see the roof go on this building season but not the finished thing until next spring, so we have plenty of time to work out how it will fit into our community. We also hope to see it as a hosting venue for any local events. I will post occasional updates as the thing progresses, describing what I am learning about such constructions. Stay tuned.