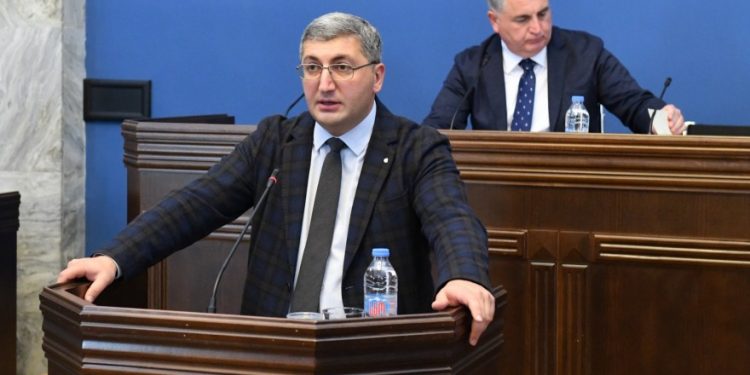 The Committee discussed and approved the Draft State Budget 2023 and the enclosed material.

“The Budget for 2023, after the pandemic and the Russia-Ukraine war shocks, shall ensure the fiscal and monetary stability, reduced inflation, inclusiveness of the economic growth and serve as a basis for the sustainable improvement,” the Chair of the Committee, Irakli Kovzanadze stated.

He noted 21 bl. 154 ml. GEL is planned to be consumed in 2023. “The salaries for public workers will increase by up to 10% and the salaries for policemen and soldiers by 20%. We will also increase the pensions by 65 GEL, meaning pensioners of 70+ and those in the highlands will receive 440 GEL; pensions for pensioners under 70 will be 295 GEL and in the highlands 355 GEL. All these increases will be funded by 494 ml GEL, which is the highest increase of the pensions and, as a result, the expenses in this direction will constitute 3,4 bl. GEL – 16% of the budget.”

The Draft was submitted by the First Deputy Finance Minister, Giorgi Kakauridze, informing MPs about the main parameters and macroeconomic and economic growth forecasts. He overviewed the assignments for the state agencies and the target programs and projects.

The Deputy Auditor General, Ekaterine Gazadze introduced the conclusion of the Audit Service concerning the Draft. She gave a positive assessment to the Draft, providing remarks and recommendations. According to her, the inflation forecast is optimistic, and the deficit forecast has been decreed to 2.9% to return to the 3% limit. She also approved the reduced state debt and noted that the improved economic tendencies are even beyond expectations, which accelerated fiscal consolidation to achieve certain goals planned for 2025 already in 2022. It is expedient for the Finance Ministry, she noted, prior to the approval of the Draft, to deliberate the debt management strategy, and determine the debt service cost indices and limits.

“According to the estimation of the Audit Service of the Draft State Budget 2023, the document is well developed and based on the admissions, it can be estimated in a thorough manner providing the applicable normative base,” she stated.

The conclusion of the National Bank was submitted by the Vice-President, Papuna Lezhava stating that the budget income is increased with 526 ml GEL along with the expenditure part, which will be directed to the increased salaries, social allowances and subsidies; it is important that fiscal consolidation is maintained and the deficit of the mixed budget returns to the sustainable level.