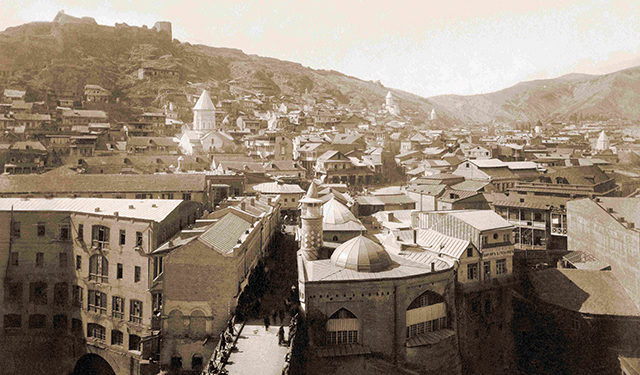 Most of Tbilisi’s still surviving caravanserais were built in the 19th century and structurally resemble each other: iron or wooden balconies overlook all sides of a rectangular courtyard. Image source: medium.com

Its location has ensured Tbilisi’s function as an important trade hub in the region for centuries. Not surprisingly, many of Tbilisi’s streets and separate buildings were once trading places for merchants from the Middle East and elsewhere.

A good representation of the city’s growing trading role is the caravanserais, most of which were concentrated in Kala, around the Sioni Cathedral in the older part of the city. The word “caravanserai” is of Persian-Turkish origin and means a “caravan house”, which was historically a public institution in the Middle East for both merchants and long-distance travelers.

Most of Tbilisi’s still surviving caravanserais were built in the 19th century and structurally resemble each other: iron or wooden balconies overlook all sides of a rectangular courtyard. In the caravanserais, there were merchants’ and craftsmen’s shops and guest rooms. The buildings were distinguished by size, number of floors, the façade, and the interior.

In old Tbilisi, there was a so-called “caravanserai of lords” located near the Church of Zion, which was built in the 18th century and consisted of sixty-two guest rooms and thirty shops. In addition, many workshops were opened there.

Opposite the Sioni Cathedral was the Tekle Caravanserai, built in the 17th century. It is noteworthy that this building, like many others, was destroyed in 1795 as a result of the famous invasion of Agha-Mohammad-Khan, the Persian Shah. The new building was called Tekle Batonishvili’s Caravanserai.

Another small caravanserai is located on the current Erekle II Street. The inner courtyard of the building, like the caravanserais mentioned above, is rectangular in shape, though relatively small in size. Nowadays, it is used as a residential space.

Among the caravanserais in Tbilisi today, the most famous is the Artsruni caravanserai at N8 Sioni St. The building was constructed by King Rostom in the 17th century. Like many other nearby caravanserais, it was destroyed during Agha-Mohammad-Khan’s expedition. In place of the destroyed building, using the old foundation, a new building (which still stands today) was built in the 19th century. After a heavy fire in 1855, the façade of the restored building was changed. It is noteworthy that the caravanserai retained its original function until the 1920s.

In terms of modern-style shopping malls, the so-called Tamamshev Caravanserai is arguably the most famous.

An acute need to establish a theater in the mid-19th century led the then Russian Imperial Administration, in particular the Crown Prince, Count Mikhail Vorontsov, to take this initiative to private individuals. Gabriel Tamamshev, a merchant from Tbilisi, expressed readiness to build a new building on the condition that the Imperial government would give him a plot of land (about 1,000 square meters) free of charge.

The construction of the theater/commercial space began on April 15, 1847 in what is today Freedom Square. Lasting four years, the construction, at the request of Vorontsov, was carried out by the Italian architect Giovanni Scudieri (1817 – 1851), who arrived in Tbilisi at the end of 1845.

After the completion of the project, the theater became the most important center of the country’s cultural life. It was the first opera house in the South Caucasus to accommodate 700 spectators, and its facade and interior matched the European theaters of the time. The theater was a four-story, rectangular building measuring 78 X 48 m. The building was two-story on the south side of the square and three-story on the north.

In addition to the theater, the imperial authorities allowed Tamamshev to place living quarters and commercial spaces in the same building. There were 6 living quarters on the first floor, 29 shops, and 11 basement spaces. On the second floor – 29 shops, 16 basement warehouses and two money exchange shops. On the third floor – 19 shops, 80 storage closets, four money exchange shops; and on the fourth floor – 21 shops. Altogether, the Tamamshev caravanserai had 266 large and small shops.

The central part of the building was occupied by the theater on the second and third floors with a stage of 47 m. length, 25.5 m. width and 15 m. height. The famous French writer Alexander Dumas, who came to Tbilisi in 1856, described in his book “Caucasus” how distinguished the first regional theater in Tbilisi was.

However, the theater would only exist for 23 years. On September 11, 1874, an extensive fire broke out at the caravanserai theater which completely burned down the building. A statement published in the newspaper “Droeba” informed Tbilisians that the fire at the Tamamshev caravanserai did not start by itself or by accident. Investigation revealed that a merchant, I. Lazarev, was the culprit.

In 1879, the entire caravanserai, except for the theater, was restored. The modern-day Freedom Square had the so-called “Tamashev Caravanserai” until 1934 when, during the large-scale reconstruction of Tbilisi, the building was torn down. To date, only two iron monuments in front of the Tbilisi City Council have survived (though many believe they are not original, but mere replicas) from the building. Moreover, if one digs deep under the Saint George monument, the foundation of the Tamamshev caravanserai can still be seen, as various photographic documents indicate.

Tbilisi served not only as a cultural and political center of the Caucasus in the 19th-early 20th cc., but also as a vibrant mercantile space. Trade routes linked the city to the rest of the Russian Empire and Middle East. Moreover, it also served as a point de connexion for oil and other natural resources exported from the Caspian to the Black Sea. The existence of major caravanserais reflected the well-established importance of the city in the regional economic affairs.