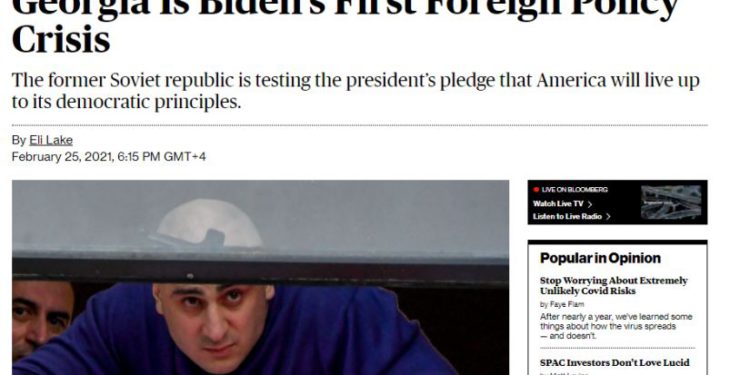 Bloomberg has responded to the recent developments and current political turmoil in Georgia with the article entitled ‘Georgia is Biden’s first foreign policy crisis,’ written by journalist Eli Lake.

In the article, the author notes that “The former Soviet republic is testing the president’s pledge that America will live up to its democratic principles.”

“Long-simmering tensions between the ruling Georgian Dream Party and a coalition of opposition parties boiled over on Tuesday when authorities arrested the leader of the largest opposition faction, Nika Melia. It was a show of force that saw hundreds of police officers raid party headquarters in Tbilisi,” the journalist points out, adding that “That arrest was a direct provocation.”

The author concludes that a crisis like this demands both stern words from the US and “A plan to punish the ruling government,” for which the Biden administration has leverage because the US continues to provide substantial aid to Georgia.

“If Biden wants to make good on his promise that America is back as a global leader, he cannot be neutral in the battle for Georgia’s democratic soul,” Eli Lake concludes.