Biden’s Realism, and High Hopes in Georgia and Ukraine 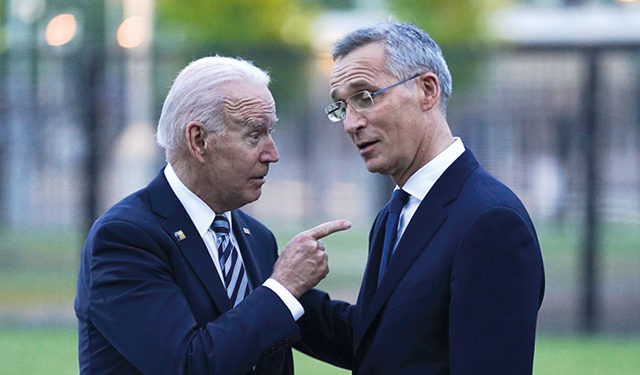 President Biden and NATO Sec-Gen Stoltenberg. The dominant perception is that Georgia is gradually being pushed out of grand strategic developments in Eastern Europe. Image source: Jam News

US president Joe Biden’s policy towards Eastern Europe is gradually shaping up.

First, Biden aims to restore the US credibility in the region shattered during Trump’s presidency. Doing so will be an arduous task requiring consistency not only through public statements, but also concrete political, economic and military actions. The recently held summit of the Bucharest Nine, a group of countries on the eastern edge of NATO, Bulgaria, the Czech Republic, Estonia, Hungary, Latvia, Lithuania and Slovakia, joined by the president himself, NATO Secretary-General Jens Stoltenberg, indicated that the Eastern European NATO states would receive far greater attention from Washington. But there are, however, uncertainties regarding Georgia and Ukraine and their bids to join NATO and the EU.

Biden is a realist. He understands that a radical increase in military support for Georgia and Ukraine would upend the regional balance of power and invite countermeasures from Russia. The timing for this is especially unfavorable, as America cannot afford to spend too much time and resources on the European front in light of growing geopolitical and geo-economic challenges posed by China in the Indo-Pacific region. And this is where political consistency of small but harmonious support for Eastern European states matter.

Biden is well familiar with the troubles of Poland, Ukraine and Georgia. Support for the eastern flank, from the Baltic to the Black Sea, is not only about defending the pure democratic and liberal ideals of those fledgling democracies, but more so about the geopolitics of Europe and the Eurasian continent as a whole.

Further east, in Georgia, the situation is gloomier. The dominant perception is that the country is gradually being pushed out of grand strategic developments in Eastern Europe. The territorial problems Georgia has due to the Russian military presence in Abkhazia and Tskhinvali Region (the latter also known as South Ossetia) will remain a major obstacle for the country’s NATO membership. Moreover, Russian military moves in the South Caucasus, particularly in the wake of the Second Karabakh War, could serve as a major disincentive for the US and NATO overall to make a major expansion step in the region.

Biden will be more straightforward in his vision of future bilateral ties with Russia, and his administration will certainly be more principled towards Moscow. It is also clear that Biden is unlikely to seek further complications with Russia. The latter’s military presence in Georgia’s Abkhazia and Tskhinvali regions will often be invoked and criticized by the US official, but it is highly unlikely that Washington is ready to push for Georgia’s NATO membership.

The Biden-Putin summit in Geneva signaled the US’ unwillingness to complicate ties with Russia amid the grand strategic shift in the US attention from the Middle East and parts of Europe to the Indo-Pacific region. As is the case with the Eastern Europe flank, this does not mean that the US foreswears its attention or obligations toward the region. But it does, however, indicate that Washington will be increasingly occupied with other problems, and raising tensions with Moscow over Ukraine and Georgia’s NATO membership might not be the foreign policy line to pursue at this time.

This also does not mean that bargaining over the fate of Georgia will be taking place. The issue of NATO membership will just be put on hold, again. But under Biden, the search for models for Georgia’s alliance membership will be proposed. The non-inclusion of Georgia’s troubled territories under NATO defense obligations, thereby extending the collective defense article solely over those territories under Tbilisi’s control, could be one of propositions. Enhanced NATO-Georgia partnership involving more regular military training, transfer of military technologies, etc. could be suggested. Under Biden, Georgia will continue to as a crucial partner in the region allowing America to influence the corridor leading to the Caspian Sea, and allowing Washington to penetrate deep into the middle of Eurasia. But when analyzing the American perception of the Ukraine and Georgia dilemma, one should understand that in the coming intensification of rivalry with the Chinese, Washington would need a Russia which is more amenable. An amenable Russia means the latter seeing benefits in cooperating with America. This could take various shapes, but one of them would most likely be bringing down tensions along Russia’s southern and western borders by postponing the expansion of NATO.