Biden Sworn in as 46th President of the US, Harris Becomes First Woman VP 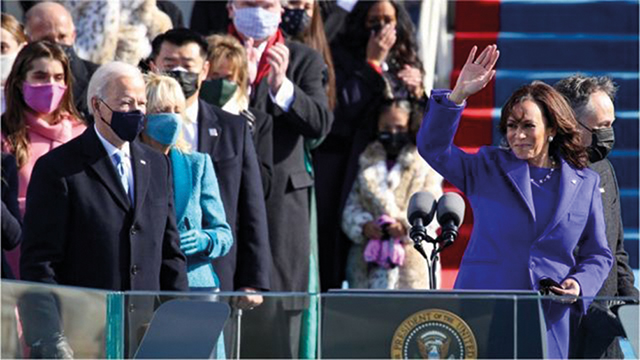 Resting his right hand on the Bible that has been in his family for 127 years, Joe Biden recited the 35-word oath of office on Wednesday afternoon, becoming the 46th President of The United States. The DC ceremony was administered by Chief Justice John Roberts Jr. and attended by three US former Presidents: Barrack Obama, George W Bush, and Bill Clinton, along with their wives, Michelle Obama, Laura Bush, and Hillary Clinton. The oldest living former president of the country, Jimmy Carter, did not attend the ceremony, but sent his regards. Unsurprisingly, now former President Donald Trump was not one of the prominent guests at the inauguration in the White House. The former President and First lady, refusing to follow tradition, left DC hours before the ceremony. His Vice President, Mike Pence, did not follow, and attended the inauguration.
Shortly before President Biden was inaugurated, Kamala Harris was sworn in as the Vice President. The 55-year-old American Senator from California is of Indian and Jamaican descent. This background has her breaking a number of records: she is the first woman, the first black woman, and the first Asian woman to break through the racial and gender “glass ceiling” in US politics, reaching a position that was, for too long, considered a “whites only” territory. This indeed already makes history, but with the Senate split evenly between the two parties for the first time since 2000, it looks like the Vice President will often be the decisive voice. On Wednesday, the Vice President brought the Democratic party’s total tally of seats in the Senate to 50, the same number that the Republicans are holding, as she swore in two Democratic senators from Georgia, Raphael Warnock, and her successor from California, Alex Padilla. VP Harris means an advantage for the Democrats as the VP has the power to break ties, being the President of the Senate. In a situation that is extraordinary, the chamber and its two top senators, Democrat Chuck Schumer and Republican Mitch McConell, have not yet agreed how exactly the branch will operate.
The unusual situation is not exclusive to the Senate. The swearing-in ceremony of the new president usually sees hundreds of thousands people gathering at the Capitol, but due to the new norms of the pandemic, there were no crowds in DC, only 200,000 flags laid out on the National Mall, representing the Americans that would be there if the coronavirus were not. In a sad moment of history, the streets of Washington were filled with 25,000 National Guard troops, on the lookout for the rioting of Donald Trump supporters, who hail themselves as patriots but who for many seem more like terrorists.
In an inauguration ceremony like no other, some traditions still prevailed. The new President and Vice President went on with the inaugural tradition, started by former President Jimmy Carter in 1977, leaving the presidential limousine and walking down Pennsylvania Avenue, to the White House. Biden and Harris, separately, took the walk with their families. Having given an interview, and said hello to Mayor Muriel Bowser of Washington, President Biden entered the White House for the first time since his departure as the VP four years ago. One of the traditions that did not prevail was a predecessor president inviting his successor for a customary visit to the White House before the inauguration.
In a reimagined ceremony, there was only a small group marching in Washington, including the drumlines from the University of Delaware and Howard University, the alma maters of the new president and vice president. Jennifer Lopez emotionally sang “this land is your land, this land is my land,” Lady Gaga performed the national anthem, and young inaugural poet – the youngest at the age of 22, in fact, – read a poem titled “The Hill We Climb” that she finished after the Capitol riot on January 6.
Biden, who has sought the office for a little over 30 years and entered it in the midst of global and national health, economic and political crises, said at the inauguration ceremony that not every disagreement has to be “a cause for total war,” referring to the political division of the nation that escalated into serious violence in the past weeks.
“Politics doesn’t have to be a raging fire, destroying everything in its path,” said the President in his speech. “We must reject the culture in which facts themselves are manipulated and even manufactured,” announced Biden, marking a new era for both fractions of the US.
Just a few hours after taking the oath of office, President Biden sat down in the Oval Office, to sign 17 executive orders, all meaning to undo the politics of now-the-former President Trump, including his response to the pandemic, environmental approach, anti-immigration policies, and more.
On his first day in office, Biden moved to order the agencies to review over 100 environmental regulations that Trump had enforced, and recommitted the US to the Paris Climate Agreement, the international accord for preventing and minimizing the effects of global warming. Trump’s great efforts for America to leave the World Health Organization are now undone, as the President sent Dr. Anthony Fauci, the country’s number one infectious disease expert, to participate in the WHO’s annual executive board meeting. The Trump-established ban on travel to the US from several predominantly Muslim and African countries has now been lifted, and the construction of Trump’s wall halted, ending anti-immigration policies legislated during four years of Trumpish Republicanism. To put it in the words of Ian Kelly, the former US Ambassador to Georgia: “Joe Biden makes America America again.”
As The New York Times wrote about the relief of many regular Americans, I took to my own social platforms to see what my friends from the US were saying about their new president. While Generation Z representatives merely shared official pictures of the inauguration day, as well as celebratory, cheerful memes, with captions like “This is a good day,” older American citizens expressed in posts how they felt.

“I woke up today with the feeling like it was the Christmas Day, and a wonderful miracle was about to happen,” Anna, 48, told me from New York.
“I wasn’t prepared for the huge sense of relief and the emotion of this day! Our first female Vice President. It took me a bit to stop the tears. Praying for Peace, tolerance, compassion and appreciation of diversity in our country!” Joy, 52, from Illinois wrote on her page.
“[I am] breathing a sigh of relief and [am] full of joy. (I definitely cried today).
We watched a woman- a woman of color no less!- sworn in as the new Vice President of the United States of America today!!! Biden delivered a beautiful speech with such a strong focus on unity. When Jennifer Lopez sang, “this land is your land, this land is my land,” there was a stirring in my soul… Garth Brooks’s Amazing Grace was simply amazing. (I think I mentioned I cried?) I’m hopeful. Now the real work begins. Let’s do this!” Leigh, 30, from Illinois said in a social media post.
The coming to power of the Joe Biden administration at the head of the US government not only brings special hope to at least half of Americans, but also raises special expectations in Georgia. Politicians and experts expect, for example, the emergence of a new perspective in terms of rapprochement with NATO; more response to Russia’s aggressive policies; and more democracy for Georgia. Unlike their opponents, the Georgian Dream party does not expect to receive more critical remarks from Washington.
The Prime Minister of Georgia, Giorgi Gakharia, on inauguration day congratulated Joe Biden on the US Presidency. He noted on his official Twitter page that Georgia is looking forward to the next stage of strengthened cooperation between the two countries.
“Congratulations to Joe Biden on becoming the 46th President of The United States. We’re grateful to you for championing the US-Georgia strategic partnership over the years. We look forward to the next chapter in strengthening our cooperation and protecting democracy & freedom around the world,” PM Gakharia tweeted.
In addition, the PM congratulated Kamala Harris on taking up the position of the Vice President of The United States.
“Congratulations to Kamala Harris on her historic accomplishment as the first woman in the United States history to serve as the Vice President. The US is an exceptional friend to Georgia & I look forward to working with you to further strengthen the partnership between our nations,” reads the PM’s tweet.
Throughout its intense history, America has been both more polarized, and certainly more united. The newly elected President Biden in his presidential oath, above all, vowed to redeem the division among the Red and Blue Americans. Although now separate, these are the colors that make up the American flag. May the country be, again and always, as its pledge of allegiance to the flag, and the republic for which it stands for, goes: “one nation, under God, indivisible, with liberty and justice for all.”