Biden Swears in as the 46th President of the US, Harris Becomes the First Woman VP 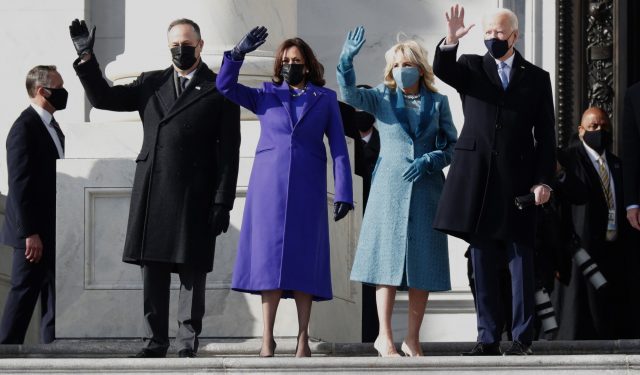 Resting his right hand on the Bible that has been in his family for 127 years, Joe Biden recited the 35-word oath of office swearing on Wednesday afternoon, becoming the 46th President of The United States. The DC ceremony was administered by Chief Justice John Roberts Jr. and attended by three of US former Presidents: Barrack Obama, George W Bush, and Bill Clinton, along with their wives – Michelle Obama, Laura Bush, and Hillary Clinton. The oldest living former president of the country, Jimmy Carter did not attend the ceremony but sent his regards. Unsurprisingly, now the former President Donald Trump was not one of the prominent guests at the inauguration in the White House today. The former President and First lady, refusing to follow the tradition, left DC hours early before the ceremony. His Vice President, Mike Pence, did not follow and attended the inauguration.

Shortly before President Biden was inaugurated, Kamala Harris was sworn in as the Vice President. The 55-year-old American Senator from California is of Indian and Jamaican descent. This background has her break some records: she is the first woman, and the first Black woman, and the first Asian woman to break through the racial and gender “glass ceiling” in US politics, reaching a position that was, for too long, considered a “whites only” territory. What is more, the fact that the Senate is now split evenly between the Democrats and the Republicans means that Harris will often be the decisive voice.

Biden, who has sought the office for a little over 30 years and entered it in the midst of global and national health, economic and political crises, said today at the inauguration ceremony that not every disagreement has to be “a cause for total war,” referring to the political division of the nation that escalated into serious violence in the past week.

“Politics doesn’t have to be a raging fire, destroying everything in its path,” said the President in his speech. “We must reject the culture in which facts themselves are manipulated and even manufactured,” announced Biden, marking a new era for both of the fractions of the US.