Belarus, Abkhazia and the Separatist Regions 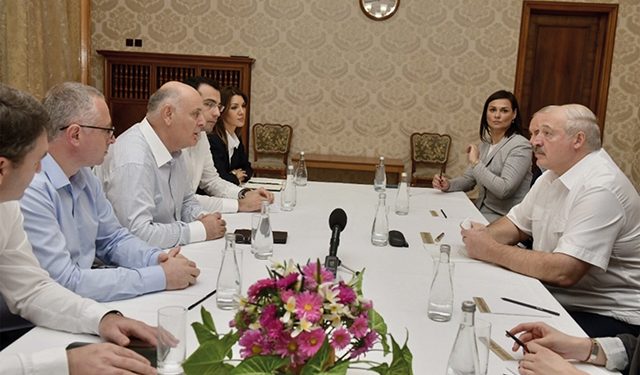 In late September, the Belarusian President Aleksandr Lukashenko paid a surprise visit to Abkhazia, a separatist region of Georgia which has effectively been under Russian military control since the invasion since the 2008 war.

The visit angered the Georgian government. Though it was, as Lukashenko said himself, only an informal visit, Tbilisi’s policy of limiting the spread of recognition of Abkhazia seemed under threat. This was all the more surprising as Georgia and Belarus shared stable and even friendly ties. Trade relations had been developed, as had cooperation between security agencies. Russia’s factor was minimized, both sides understood well that there was no need to complicate bilateral relations. Red lines, such as Georgia’s territorial integrity, remained uncrossed. Similarly, Tbilisi’s position toward the post-election protests and crackdowns in Belarus in 2020 was neutral.

What exactly Lukashenko had in mind when visiting Abkhazia is unclear. He spoke in veiled terms: “We want to build not just a bridge of friendship, but very serious relations,” he told Aslan Bzhania, the separatist leader. Tbilisi’s reaction was quick. The country’s Ministry of Foreign Affairs summoned the Belarussian ambassador and expressed concerns, demanding additional clarifications from the Belarussian side.

Lukashenko’s statements could signal the coming change of Belarus’ policy toward separatist regions. Minsk might finally be siding with Moscow on all sensitive issues it has so far managed to maintain a balance on. Yet, it is not the first time he made suggestive statements on Abkhazia. For instance, just before Russia invaded Ukraine in February, Lukashenko hinted that Minsk might recognize the independence of Abkhazia and South Ossetia, another separatist region of Georgia. He might have been playing a messenger’s role from Putin, whom, incidentally, he met just before his recent visit to Abkhazia, to relay Moscow’s willingness to support the region more if it agrees to some sensitive demands from the Kremlin.

Lukashenko’s September visit and the themes discussed thus cannot be decoupled from Abkhazia-Russia dynamics. Abkhazia’s separatist leadership has yet to officially agree to transfer the 186-hectare (460 acre) Bichvinta (Pitsunda) estate where Soviet leaders once spent their summers, and its resort seafront, to the Russian side. The likely decision would be part of an agreement confidentially negotiated in early 2022 between the Kremlin and local leaders, which in turn builds upon the 2020 program aiming at harmonizing the Abkhaz-Russian relationship. In reality, the deal paves the way for the breakaway region’s de facto annexation.

Russia’s recent behavior brings into question Abkhazia’s remaining autonomy vis-a-vis the Kremlin. The Abkhaz population is opposed to the resort’s handover, calling for a moratorium on the process. And though the final decision has yet to be made by the region’s parliament, the overall feeling is one of inevitability about the final decision. The overwhelming public sentiment is that of betrayal by Abkhaz officials of the region’s independence aspirations.

The talks on unofficial handover of the resort followed the decision to give the non-functioning Sokhumi airport to the Russian tycoon Oleg Deripaska. The airport has been a subject of intense negotiations between the two sides, as the Abkhaz representatives pushed for investments from Russia, while the latter seemed unwilling to commit because of the international community’s firm support for Georgia’s territorial integrity, which makes it impossible for international airlines to use the airport. The handover hardly looks like an investment, but rather another concession from the Abkhaz side to address Russia’s openly imperial ambitions.

Russia has a strategy that rests on cultivating and utilizing fears in Abkhazia. And with nearly 5000 Russian troops in the separatist region as a check against Georgia’s NATO aspirations, Abkhazia has little space to resist Russian depredations. Any move to limit cooperation with Moscow would be met with Russian economic and political reprisals.

Russia cleverly exploits the situation through new demands to separatist leaders. Those usually involve rights for Russians to buy land and apartments. Arguably more important is the sale of existing Abkhaz infrastructure, such as electricity grids, water pumping systems, and other facilities. Investment is critical to the Abkhaz economy, which has traditionally been entirely dependent on Russian tourism. Yet, allowing foreigners to buy the land (a right prohibited by the Abkhaz “constitution”) is a deeply traumatic concession.

Bzhania blackmailed the population by arguing that the request for the estate’s handover came directly from Putin, who wants to hold official meetings there. The Abkhaz side, Bzhania argued, could not ignore it, because Russia is the security guarantor without which Georgia would be emboldened to enforce its territorial integrity.

Blackmail comes from the Russian side too. Mikhail Shurgalin, the Russian ambassador to Sokhumi, argued during one meeting with Abkhaz non-governmental organizations that a refusal to agree to the Russian request could result in Russia’s reconsideration of financial and military support to Abkhazia.

Thus, Lukashenko’s September visit might have been part of a carefully-crafted Russian campaign to persuade Abkhazia to transfer the Bichvinta resort to Moscow. But it also might signal a change in Belarus’ foreign policy: Minsk could abandon its long-held policy of non-recognition of separatist regions.

This potential scenario would be impossible without the effects the war in Ukraine has on Eurasia. The invasion is causing major geopolitical re-alignment. As Russia’s fortunes in Ukraine turn increasingly grim, its allies, among them Belarus and Abkhazia, have more limited options for maneuvering.