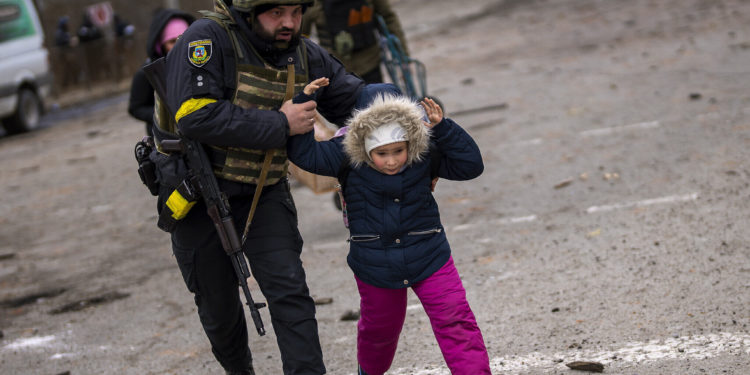 A Ukrainian police officer runs while holding a child as the artillery echoes nearby, while fleeing Irpin on the outskirts of Kyiv, Ukraine, Monday, March 7, 2022. (AP Photo/Emilio Morenatti)

Children were among the victims from aerial attacks on the city of Sumy and its surrounding suburbs late on Monday, reports the BBC, citing local Ukrainian military officials.

According to the BBC, Dmytro Zhyvytsky, leading the Sumy Regional Military Administration, said in a video posted on Facebook that Russian forces carried out areal strikes after 11pm local time.

“Unfortunately, children were among those killed,” Zhyvytsky said, explaining that more than 10 people were killed.

“Kids are being killed,” Zhyvytsky wrote in a Facebook post, sharing a video of the reported attack.

“We will never forgive this!” he added.

The BBC said it could not independently verify the claims.

Related Story: At Least 13 Killed in Airstrike on Bread Factory outside Kyiv