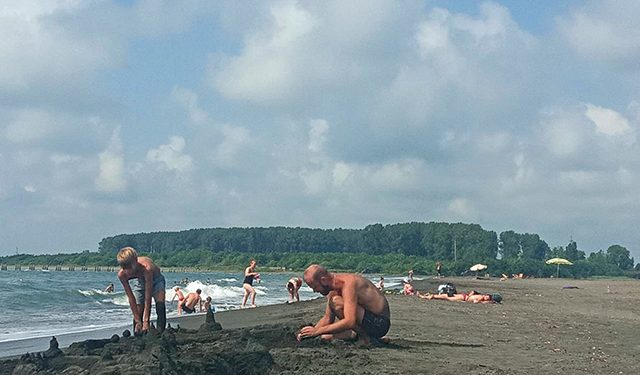 The Russians are coming to Georgia. This time, as visitors arriving either as tourists or staying in the country indefinitely. Russia’s invasion of Ukraine forced many Russians to flee their country, and Georgia, which offers a unilateral visa-free regime, quite naturally represented an attractive destination. To be sure, Russians are seeking residence in other places too, such as Armenia or the central Asian states, but in Georgia, the internal political situation is tense, making the inflow of Russians a highly politicized subject.
Russian tourists visiting Georgia have always been in larger numbers than visitors from any other country. When Russia invaded Ukraine in February, some tens of thousands came, and with Russian defeats and the dragging out of the conflict, the numbers are growing, causing fears in Georgia, a country which has been invaded and partially occupied by Russians in since 2008, that something more ominous is being disguised as tourism.

The numbers are huge. The inflow of some 250,000 Russians to a country of about 3.7 million has increased tensions, especially in tourist areas. Some plan to stay longer — in the March-August period alone, up to 7500 companies were registered by Russian citizens, in addition to a fairly high number of real estate purchases in major Georgian cities. This brought about a major boom in flat prices- benefiting, but mostly angering many Georgians. This is especially so as students coming for studies to Tbilisi are struggling to find flats they can afford.

The inflow of some 250,000 Russians to a country of about 3.7 million has increased tensions

The large numbers do offer some economic recompense. Indeed, the Georgian currency, the Lari, has fared fairly well over the past months and recovered some of its losses against the US dollar: Though monthly inflation remains quite high with no signs of abating, economic growth is stable.

The influx has also resulted in security concerns. The opposition claims that among the Russians there are numerous Kremlin agents. Some of those concerns were evidenced in a recent revelation made by several Russian former and current residents claiming they were sent into Georgia to spy on their compatriots.

Demographic fears are also rising as greater numbers of Georgians leave the country for work in Poland, Germany, and especially the US. In 2021 alone, nearly 100,000 people left. For a country of its diminishing population size, the numbers of arriving Russians are staggering, as is the scale of Russian tourists-cum-seekers of permanent residence.

An online petition has been launched in Tbilisi to push the government into re-introducing visas for Russians. This comes at the moment when calls for a complete ban on Russian citizens are materializing across some parts of Europe.

The ruling party, Georgian Dream, is on the fence. And while it tries to pilot a balanced approach to the problem, the opposition accuses it of covert pro-Russian sentiment. This is not helped by the ongoing tensions between Georgian Dream and the country’s Western partners, which also fuels allegations about the party’s true intentions. Though it is unlikely that a major shift in Georgia’s foreign policy will occur, there are indeed indications that its approach to its historically close ties with the EU and NATO are becoming more nuanced and distant. More geopolitical balancing is expected to be on display.

As bilateral trade grows and tourism flourishes, there is still very much a live collective memory of the Kremlin using economic leverage in the past

Many Georgians try to show their negative stance toward the inflow of Russians by exhibiting anti-Russian signs, graffiti, or Ukrainian flags. Batumi, Georgia’s major sea resort, is filled with Russians, and tensions are palpable across the city. The main boulevard has signs declaring “Moscow Will Burn” and “Russians Go Home.” Europe Square has had nearly daily flash mobs of people waving Ukrainian flags and exhibiting banners with “Russia is a Terrorist State.” Russians tend to respond with slurs and gestures.

While the majority of Georgians may be decidedly anti-Russian, the business sector is disregarding social tensions and is seeking to lure as many Russians as possible. Georgia is economically increasingly dependent on Russia, something that has become even clearer in recent months. Yet, as bilateral trade grows and tourism flourishes, there is still very much a live collective memory of the Kremlin using economic leverage in the past.

Most Georgians are also able to distinguish between the different types of Russian arrivers. Many have fled Russia because free speech is trampled upon and because weakness or doubt are now seen as treachery. These people understand that the war in Ukraine will be a long conflict, perhaps even decade-long, with unknowable consequences. They create cafes and live within small, mostly Russian-speaking, social groups. Their presence is seen as less threatening because they tend to blend in rather than stand out, and they often appreciate the fears and demands of the local population. Many Russian shop owners even try to learn Georgian to make their businesses available to all interested.

In March-August, up to 7500 companies were registered in Georgia by Russian citizens

The ambiguity in the streets of Georgian cities exemplifies the challenge the country is currently facing as the regional balance of power teeters: If Russia’s military successfully occupies large parts of eastern and southern Ukraine, then the South Caucasus will look like a very different place.

If Georgia re-introduces visas, it might well anger the Kremlin, or so the government’s logic goes. Social disturbances, even at the level of rioting, might potentially instigate a Russian reaction. So the Georgian government chooses to do what it does best: wait on yet another critical situation, hoping for the worst of the storm to pass. It worked in past crises. This time, however, the situation is much riskier.