Back on Tour: Etseri, Svaneti 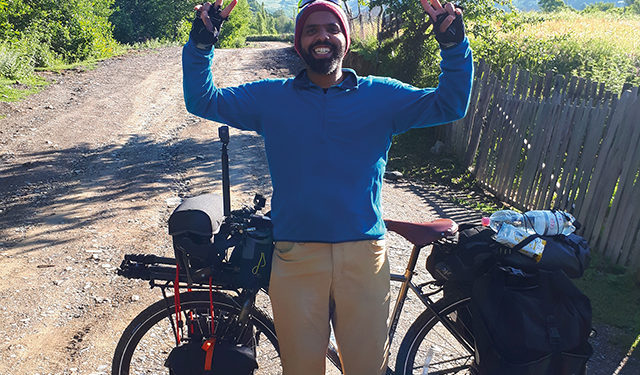 It now seems safe to say that, here in Upper Svaneti, tourism is making a strong comeback after we said goodbye to the last of our winter guests in mid-March 2020, slipping away as Covid gripped the world. We do require proof of either recent full vaccinations or negative recent tests, but visitors are welcome.
We have re-opened our booking.com calendar, so that people can reserve a spot directly with us in advance. There are also all the other ways of finding us, none of which we have closed during the entire Virus crisis: a sign at the bottom of our road, the footer of my weekly Georgia Today article, 3 Facebook pages, TripAdvisor.com, Google Maps, maps.me, two guidebooks featuring Georgia, a local guidebook on Svaneti, and more.

There are also the unannounced drop-ins, and we have long learned to be ready for these. Seldom more than two people, they nonetheless require bedrooms and meals always to be ready just in case- these travelers can show up at almost any time.

Having seen off our 18 Poles, we have since hosted people from Belgium, France, Saudi Arabia, South Africa and the USA. The Americans were the parents and most of the siblings of a young man who has been with us six times, and whose marriage ceremony it will be my great honor and privilege to perform in a couple of weeks’ time near Tbilisi. While none of these guests was able to add to our guest book’s list of 64 languages, many of them wrote nonetheless, starting a new year for the guest house, for which we are glad. If the season continues in this vein, we will be most grateful.

Many of our travelers walk the road and footpaths which take them above us to Mazeri, the top of the village of Becho. It’s about a 7-hour trek, depending on how heavy your backpack is, rewarded from the halfway point onwards by glorious views of Mt. Ushba from its south peak (as long as the capricious weather is cooperating, that is). There is even a small lake just past halfway in which to shoot reflections of the famous mountain, always a bonus for a photographer.

We can also connect our guests with other accommodation in different villages, Becho, Mestia and Ushguli particularly: people we know and trust to receive and look after them well. But sometimes there are just here for the utter peace and quiet which Etseri offers.

One thing which is brand new for us this summer is the inclusion of a village lady helper, whom I mentioned in previous writing. Now, several turns in, she is proving to be a huge benefit in cooking and cleaning, someone worth her weight in Svan Salt and someone we really hope will be in it for the long run of mutual support.

The flowers are coming out in turn; soon, when the elderflowers appear, I will start picking them for both liqueur and cordial. Rose petals have already gone into moonshine and sugar syrup as well as being dried for tea. Mint tea straight from the garden is also a popular choice, especially for those who have never had it fresh before; some of them, particularly the children, delight in picking it themselves to see where it actually comes from. A quick wash and it’s straight into the cup, seconds out of the soil.

Other green herbs also add a lot to what we can offer locally and organically, as well as sulguni cheese from our neighbors. Local matsoni (yoghurt), my smoked cheese and dried smoked tomatoes, onions, garlic, lettuce, dill, parsley, beetroot, potatoes and more, later to be followed by sweet or sour plums, cherries the same, apples, pears, rosehips, elderberries, raspberries, blueberries, even the spring water which serves the whole village, and that from several mineral sources too… it doesn’t get much better than this.

We are glad to spread the table with all the goodness that our and nearby patches of ground bring, as it adds a thoroughly Svan touch to what Hanmer House provides. The tourism season has fully returned now, and after such a long hiatus, we are as ready as can be for you. We also hope that all other tourism and hospitality providers in the country are in the same situation, as it has been too long for us to be idle and equally long for travelers not to be on the move!