Avlabari: from the Outskirts to the Center 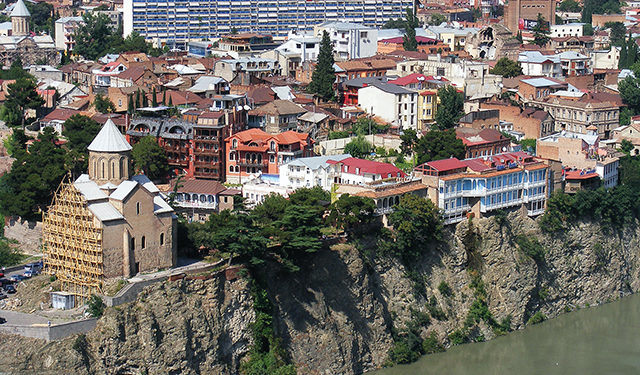 Avlabari is a historical district located on the left bank of the Mtkvari River. It is famous today for its churches and the heritage belonging to many nationalities living in Tbilisi.

For centuries, it was firmly outside the city, cut off from the ancient neighborhoods by the river. It was known for its Arab prison and, for a time, was called Soghdebili (სოღდებილი), which is believed to be a reference to an ethnic group that settled in the area when Tbilisi was part of the Persian Empire.

The first mention of its modern name dates back to the 14th century when it is mentioned as a suburb of Tbilisi. The name, a mixture of the Arabic “Havl” (field) and the Persian “Bare” (fence or rampart), seems to underline the idea that it territory was considered out of the city – the space beyond the barrier. It was also at times known as Isani (fortress in Arabic), but should not be confused with the current Isani, which is a large district to the east of Avlabari.

Controlling Avlabari was essential to keeping Tbilisi safe and secure from external pressure. Serving as one of the entrances to the walls of the medieval capital, it must have been a territory where military contingents were present. In the age of intensive trade, when Tbilisi was an active participant on the Silk Road, the road through Avlabari served as a causeway which led to the eastern part of the unified Georgian Kingdom.

In the early 19th century, Avlabari hosted Russian military barracks, and Russian Governor-General Paskevich designed a plan to turn it into a district of the capital in 1831. A map of the area dating back to that period shows it divided into small quarters and blocks for officers and soldiers.

Paskevich’s plan was eventually dropped, however, and instead Avlabari expanded under a slow spread of streets and standardized building façade. It became famous for its markets, which hosted merchants from neighboring cities.

Even though Avlabari has never been the heart of the city, it is full of sites that reflect Tbilisi’s multi-cultured and multi-ethnic past.

Historically, Avlabari has been home to Tbilisi’s large Armenian population, one that has traditionally been concentrated around the Echmiadzin Cathedral (Ketevan Tsamebuli Square). Other prominent churches are also located in the district, including the Holy Trinity Cathedral of Tbilisi, commonly known as Sameba (სამების ლავრა), which means “trinity.”

Constructed between 1995 and 2004, Sameba is the third-tallest Eastern Orthodox cathedral in the world and one of the largest religious buildings in the world by total area.

Avlabari also hosts an old clandestine printing house that was set up by Joseph Stalin in 1900 on what is now Kaspi Street. He believed that the compiling, publishing and disseminating of illegal literature was an important aspect of the nascent revolutionary movement. Stalin’s pupil and friend Mikho Bochoridze was assigned to organize the printing house. The printing press produced newspapers and proclamations in the Russian, Georgian, Azeri and Armenian languages.

Not far from the Avlabari metro station, a beautiful palace, known as Queen Darejan’s Palace, overlooks the Mtkvari River, on Vine Rise near Europe Square. Darejan was the wife of the famous Georgian King Erekle II, who eventually became one of the figures of opposition to Russian rule in Georgia. Not far from the palace, the famous historic neighborhood of Metekhi is perched on the cliffs, overlooking the Mtkvari River. The neighborhood is home to the eponymous Metekhi Church of Assumption.

Today, Avlabari has become a hub for tourists and home to some of the city’s newest architectural sites: the Bridge of Peace, which connects Avlabari and the Old City; Rike Park, an open and green recreational area that serves as a gateway to the historic Narikala Fortress and Botanical Gardens via a ropeway; and the new presidential palace, located between Tsutskiridze and Abdushelishvili streets.

But Avalabari’s potential as a tourist space is not yet fully grasped. Large scale renovation of the entire district is necessary, as is the laying out plans how the territory could fit into the concept of Tbilisi as an emerging tourist destination center.