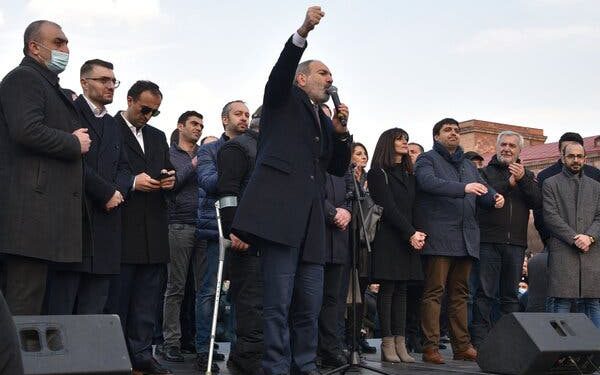 “Only the people can solve this issue. Let the people demand, let the people judge, even if they decide to shoot me in this square.” – Nikol Pashinyan

Armenian Prime Minister Nikol Pashinyan told supporters gathered at Republic Square in Yerevan that the discussion of early parliamentary elections in the country has been removed from the agenda.

According to Pashinyan, whether he should resign or not should be decided by the Armenian people.

The Armenian PM’s public address came after the General Staff of the Armenian Armed Forces demanded Pashinyan’s resignation. Pashinyan described this as an attempted coup, firing the chief of staff and his deputy.

The situation in Yerevan is extremely tense. Rallies by supporters and opponents of Pashinyan are being held in the Armenian capital.

Azerbaijani President Ilham Aliyev has responded to the ongoing crisis in Armenia by saying that, along with the war, “the Armenian army is over”, and forces who have “revanchist” views will “receive punches”.

Commenting on the worrying events, Aliyev called Armenia a “fascist state” and said:

“I heard a few days ago that their allies want to modernize the Armenian army. Why? Against whom? The war is over. If someone lives with revanchist views, they will get a fist. Do not test our patience. The Armenian army is over, it does not exist and should not exist. There should be no army in such a fascist state.”

“We will never allow our citizens to be endangered or put at any risk by returning to the liberated land,” Aliyev said, according to the translation of his statement published by RIA Novosti.

Khachaturian “ridiculed Nikol Pashinyan’s statement about the Russian missile complex – Iskander,” where the Armenian PM called them “useless,” according to Armenian media.

Following Khachaturian’s ouster, on February 25, the General Staff of the Armenian Armed Forces called on Nikol Pashinyan and his government to resign immediately.

“The Prime Minister and the Government are failing to make adequate decisions in this highly critical and fateful situation,” the General Staff said in a statement.

High-ranking military officials also write that “the ineffective governance of the current government and serious mistakes in foreign policy has brought the country to the brink of collapse.”

In response to this statement, Pashinyan wrote on Facebook that he assessed the statement of the General Staff as an attempted coup and called on the supporters to gather at the Republic Square.

At the same time, an opposition rally is being held, both sides of protesters blocking the Armenian streets.