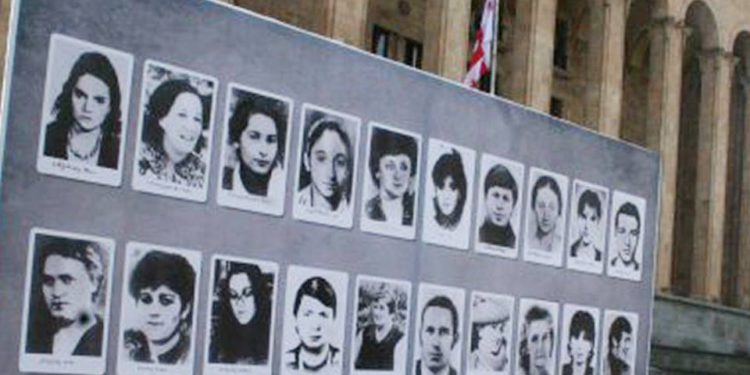 Memorial of the Tragedy Victims on Rustaveli Avenue

The April 9 tragedy (also known as the Tbilisi Massacre or Tbilisi Tragedy) refers to the events in Tbilisi, when an anti-Soviet demonstration on central Rustaveli Avenue was dispersed by the Soviet Army, resulting in 21 deaths and hundreds of injuries. Among the deceased were 17 females and 4 males, including many 16-year-old students and women of different ages. In the aftermath of the brutal raid, hundreds of peaceful protesters were poisoned by gas and many of them severely injured.

The events of 9 April 1989 were the culmination of weeks of demonstrations for Georgian independence and against separatism in the Georgian Black Sea region of Abkhazia. The demonstrations included hunger strikes, but were overwhelmingly peaceful. At their peak, about 10,000 people are estimated to have been present.

The request to send Soviet interior ministry troops came from the First Secretary of the Georgian Communist Party, Jumber Pastiashvili. The troops were commanded by Colonel General Igor Radionov.

Several minutes before the raid, in an effort to prevent bloodshed, the Catholicos-Patriarch of Georgia, Ilia II, asked the people to enter the nearby Kashueti church and pray. The protesters, however, didn’t move. Shortly after the Patriarch’s address, the troops started approaching the parliament building. Armed with entrenching shovels and blunt weapons, soldiers, under the command of Colonel General Radionov, started brutally routing the protestors. The riot police also used chemical gas.

On April 10, in protest against the onslaught, Tbilisi and the rest of Georgia went out on strike and a 40-day of national mourning was declared. People brought a large number of flowers to the place of the killings to pay respect to the deceased.

A year later, on 9 April 1990, Georgia adopted its Declaration of Independence.

On April 9, 1991, the second anniversary of the tragedy, the Supreme Council of Georgia declared Georgian sovereignty and independence from the Soviet Union based on the results of a nationwide referendum.

In the same year, one of the leaders of the protest movement, Zviad Gamsakhurdia, was named the first democratically elected President of Georgia.

A memorial to the victims of the tragedy was opened at the location of the crackdown on Rustaveli Avenue on November 23, 2004.

Igor Radionov went on to become a member of the Russian Parliament, the State Duma, and Minister of Defense under President Boris Yeltsin. A conservative man, fundamentally anti-Western in his attitudes, he remained unrepentant about his actions in Tbilisi.

April 9 is now remembered as the Day of National Unity, an annual public holiday in Georgia.

The night of April 9 remains in the history of Georgia as one of the most tragic but at the same time heroic dates, when the whole country united to fight for its independence.