Anna Buchukuri: Our Bill will be Important Step to Weakening Influence Groups in Court 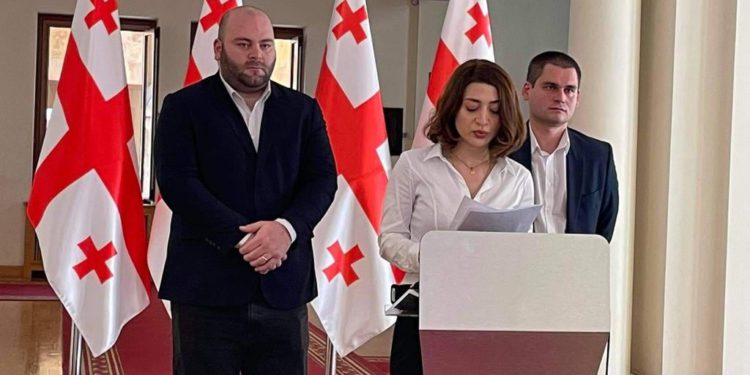 “We’re initiating the bill, which will be an important step towards weakening the influence groups in court,” said Anna Buchukuri, a member of the political council of For Georgia party, at a briefing held along with party members Mikheil Daushvili and Beka Liluashvili.

Buchukuri noted that the government is continuing the process of appointing judges contrary to the spirit and content of the political agreement of April 19, which is a direct violation.

She added that the party “For Georgia” calls on all interested parties to immediately begin work on reforming the High Council of Justice, which is needed to restore confidence in the system today, not to support the ongoing process of selecting Supreme Court judges, not to allow speculations on the selection of 5 non-judicial members of the High Council of Justice and not to allow authorities to present the changes aimed at improving the formal procedures once again as a step towards the independence of the judiciary.

“1. The ongoing process of appointing judges must be stopped! 2. We will perform the function of the mandate of the Member of Parliament – we will physically attend the sessions and use the tribune to show the public the vicious sides of the ongoing processes, however, we will not support the candidates for judges selected on the basis of such a process; 3. In addition, the Parliament should elect 5 non-judicial members of the High Council of Justice in the near future, which, based on the Constitution, requires the votes of 90 deputies. The ruling party has only 84 deputies. Consequently, the government will definitely try to negotiate with the political groups in exchange for a vote. We do not trade with the government or the opposition for 5 non-judicial members of the High Council of Justice. We will support only independent candidates whose trust will not be questioned. We see this process as an important step towards creating an alternative center of power in the system and thus weakening the influence groups; 4. We will not support the initiative of the National Movement to set up a temporary commission of inquiry into the clan management in the courts, as the existence of influence groups in the courts is already a fact and any such initiative is not a real case but a use of judicial reform for political purposes. 5. In addition, a balance of excess power concentrated in the High Council of Justice is critically necessary. This is what should be the essential breakthrough in a given situation. To this end, the Party for Georgia will initiate a legislative change in the coming days, aimed primarily at eliminating “influence groups” in court. The amendment will change the rule of decision-making by the High Council of Justice and will be based on the so-called the principle of double 2/3. In particular, the decision will require the consent of 2/3 of the judica members of Council and 2/3 of the non-judicial members,” said Anna Buchukuri.

The High Council of Justice is in the process of selecting candidates for judges of the Supreme Court, in parallel with which a rally was held in front of the Council building today to protest against these processes. Protesters believe that these processes are not legitimate and demand its suspension. They note that arguments of illegitimacy include several factors, including the absence of a member of Council of Justice elected by the Parliament, criticism of international partners and their recommendations, as well as the agreement of Charles Michel.