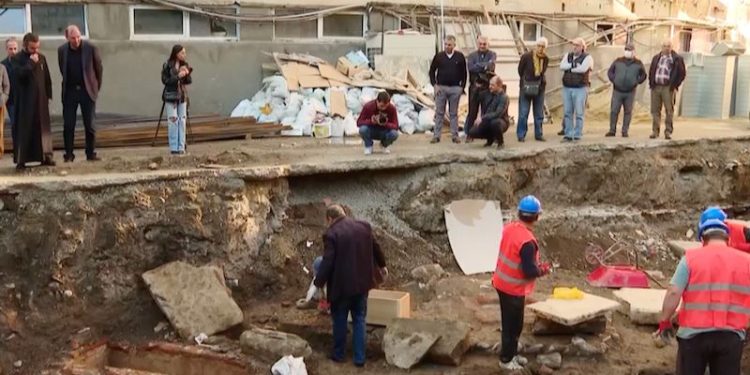 The Ministry of Culture reports that in Tbilisi, in the yard of the Ministry’s building, where there was an Armenian temple in the past, and a cemetery nearby, ancient tombs and the remains of five people were discovered during the latest rehabilitation.

The Ministry says that during the ongoing rehabilitation works on the territory of the Ministry building, two tombstones were discovered, after which the Ministry stopped the work and invited archaeologists to dig deeper.

“The archaeologists also worked on other parts of the internal yard of the Ministry and discovered a total of five remains. Two have been identified thanks to the inscriptions on the tombstones. According to the epitaph, one grave belongs to the priest of the Armenian temple, Ohanez Ter Poghosian, and the other to his wife,” the ministry’s press center reports.

The Ministry explains that “in the past, there was an Armenian church in this area, and during the Soviet period, the Armenian cemetery adjacent to the church was abolished.” The agency says that notification about the discovery was sent to the Georgian Diocese of the Armenian Community of Georgia and the Armenian Apostolic Church.

Archaeologist Zurab Giorgadze of the Archeology and Cultural Heritage Research Service states that “we are dealing with a Samarovan (cemetery) of the late 19th century/early 20th century”.

The specialist says: “the Armenian Vank monastery was located in this place, with auxiliary buildings, and a chapel was arranged on the north and south sides of the temple.”

According to Giorgadze, there are several dozen tombstones on the site, of which only the two mentioned above have been identified.

The Ministry says on October 18, based on the agreement of the Ministry and the Armenian community in Georgia and the leader of the Georgian Diocese of the Armenian Apostolic Church, Archimandrite Kirakos Davtiani, the remains were transferred to the State Pantheon of Armenian Writers and Public Figures in Khojevanki.