Anchors Away for a New Georgian Navy 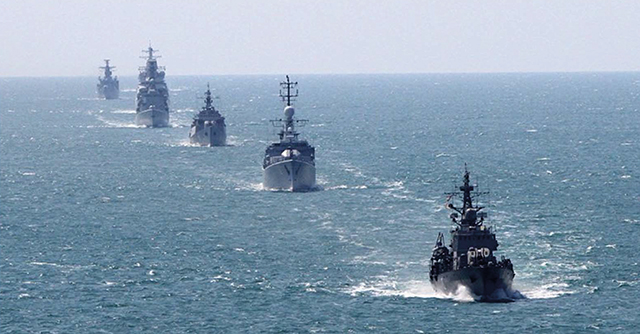 Photo by NurPhoto/NurPhoto via Getty Images

Virtually all nations with significant coastlines maintain, as a part of their larger armed forces, a naval service component. While there are exceptions, mostly small Pacific islands that defer to Australia for military defense, coastal defense is a key component. This becomes more important when the particular body of water bordering the nation is strategically vital to regional defense. In Georgia’s case, this is the Black Sea.

With the recent Sea Breeze 2021 naval training exercise, the images of NATO’s tall ships juxtaposed to Georgia’s smaller white Coast Guard boats displayed this disparity in naval power. With 310 kilometers of coastline, it’s somewhat shameful that there is no Navy stationed anywhere along this coast. This has not always been the case. While the Georgian Navy was never over 19 vessels, none of which were of significant size by current NATO comparison, it still served with distinction. During the Abkhaz War, they managed to evacuate many women and children and even score a victory against a small flotilla of enemy boats.

Following the internal conflicts, Georgia was supported with vessels and training by Ukraine after Russia blocked the sale or transfer of equipment. Turkey even donated material and training throughout the late 1990s and early 2000s. However, during the 2008 War, Russian aircraft and naval ships attacked the city and naval port of Poti. In the process of sinking a plurality of the Georgian Navy’s vessels, the city was ransacked by Russian land forces. In the aftermath, Georgia merged the remnants of the Navy with the Coast Guard.

Since then, the Coast Guard has operated with increasing success in training operations with NATO, as well as hosting various Black Sea naval patrols. This has laid the groundwork of knowledge and experience for the future of the next, reborn, Georgian Navy. In fact, the Coast Guard, a part of the larger Border Police of Georgia in the Ministry of Internal Affairs, maintains several small ships that would make for the first warships. In addition, the procurement of more vessels of larger size and of diverse capabilities would take place. To do this, the Navy would need to turn to some of the larger nations that are retiring their older but perfectly capable ships.

An ample candidate for this is the United States Navy. Their mothball fleet has been slowly growing as the force shrinks due to the lack of significant naval power in the world overall. When compared to their Cold War era navy, and particularly their Second World War navy, they only have a fraction of the need for large battleships and cruisers. As these ships become either unnecessary financially or obsolete to newer models, they are often sent to a scrapyard or sold to allied navies. In fact, when looking at many of the NATO navies during the cold war, much of the fleets were staffed by ships that once served the United States Navy against the axis forces.

The large transfer of these ships was aimed as a strengthening maneuver to counter the potential of Soviet aggression in Europe. Now, as Russia begins to mimic this aggression, even acting on it in Georgia and Ukraine, it becomes another opportunity to check this expansionism. Indeed, a new Georgian Navy would also cut off Russia from its campaign in Syria. As it is Russia’s “baby” in foreign military policy, slicing this element from their proverbial fat would keep them in their sphere and contain the threat in the embattled Middle East nation.

However, the focus would, and should, remain on the region. Supporting a key ally in the Black Sea would be instrumental in keeping Russia’s Black Sea Fleet in check. Particularly since they have become so unleashed as to fire warning shots at a passing British Royal Navy ship, something that in past times would elicit counter actions.

Of course, reviving such a sizable navy is not without its expenses. From crew costs to maintenance, keeping warships is no inexpensive affair. With proper political maneuvering, some support can come from foreign entities. However, it is not a viable long-term plan, and a new Georgian Navy requires the support that will keep the Black Sea in the firm grasp of trustworthy forces. To do this, Georgia may need to reduce its frivolous government spending and focus on things that affect its sovereignty. Fewer leather chairs, more anti-aircraft weapons.

With the Black Sea being the next naval flashpoint, a position contested only by the South China Sea, it is imperative that NATO keep a close ally in the region. Turkey, while a NATO member and with a navy to support this mission, is not enough. Their recent purchase of Russian military hardware should be enough to push NATO to invest in an insurance policy, namely Georgia. Georgian naval assets would be instrumental in orchestrating a network of security and safety against the reckless Russian Black Sea Navy.

Shifting this power to Georgia is not only a move to promote Georgia’s ascension to NATO, but also a guarantee of trust and partnership. This level of investment is something Tbilisi would surely welcome, with Washington D.C. and Brussels operating with more freedom with the Black Sea out of the grasp of the Kremlin. While the cost of a new navy is not contestable, the cost of surrendering the Black Sea, and as such the South Caucasus, is far more expensive and in more so than mere dollars.