An Overview of the Georgian Wine Sector 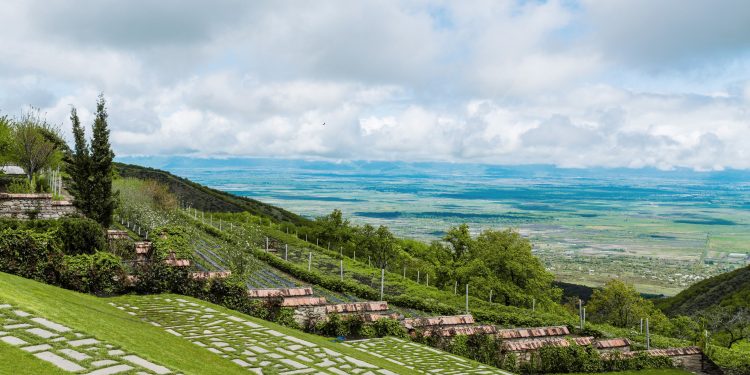 Georgia has an 8000-year-old winemaking tradition, making the country the first known location of grape winemaking in the world. In this policy brief, we analyze and discuss major characteristics of the wine sector in Georgia, government policies regarding the sector, and major outcomes of such policies. The brief provides recommendations on how to ensure the sustainable development of the sector in a competitive and dynamic environment.

The Georgian winemaking tradition is 8000 years old, making Georgia the world’s first known location of grape winemaking. There are many traditions associated with Georgian winemaking. One of them is ‘Rtveli’ – the grape harvest that usually starts in September and continues throughout the autumn season, accompanied by feasts and celebrations. According to data from the National Wine Agency, the annual production of grapes in Georgia is on average 223.6 thousand tons (for the last 10 years), with most grapes being processed into wine (see Figure 1).

Wine is one of the top export commodities for Georgia. It constituted 21% of the total Georgian agricultural export value in 2021 (Geostat, 2022). Since 2012, wine exports have, on average, grown 21% in quantitative terms, and by 22% in value (Figure 2). The average price per ton varies from 3,000 USD to 3.9 thousand USD (Figure 2). Exports of still wine in containers holding two liters or less constitute, on average, 96% of the total export value.

The main destination market for exporting Georgian wine is the Commonwealth of Independent States (CIS) countries, which account for, on average, 78% of the export value (2012-2021). The corresponding share for EU countries is 10%. As of 2021, the top export destinations are Russia (55%), Ukraine (11%), China (7%), Belarus (5%), Poland (6%), and Kazakhstan (4%). While Russia is still a top market for Georgian wine, Russia’s share of Georgian wine exports declined after Russia imposed an embargo on Georgian wines in 2006. The embargo forced market diversification and even after the reopening of the Russian market and Georgian wine exports shifting back towards Russia, its share declined from 87% in 2005 to 55% in 2021.

GOVERNMENT POLICY IN THE WINE SECTOR
The Government of Georgia (GoG) actively supports the wine sector through the National Wine Agency, established in 2012 under the Ministry of Environmental Protection and Agriculture (MEPA). The National Wine Agency implements Georgia’s viticulture support programs through: i) control of wine production quality and certification procedures; ii) promotion and spread of knowledge of Georgian wine; iii) promotion of export potential growth; iv) research and development of Georgian wine and wine culture; v) creation of a national registry of vineyards; and vi) promotion of organized vintage (Rtveli) conduction (National Wine Agency, 2022).

From 2014-2016, the GoG’s spending on the wine sector (including grape subsidies, promotion of Georgian wine, and awareness increasing campaigns) amounted to 63 million GEL, or 22.8 million USD (as of November 1, 2022, 1 USD = 2.76 GEL according to the National Bank of Georgia). Of the spending, illustrated in Figure 3, around 40-50% was allocated to grape subsidies implemented (under the activities of iv) (as mentioned above).

There are two types of subsidies used by the GoG– direct and indirect. Direct subsidies imply cash payments to producers per kilogram of grapes. As for indirect subsidies, they entail state owned companies purchase grapes from farmers.

In 2022, the GoG have continued subsidizing the grape harvest to help farmers and wine producers sell their products. During Rtveli 2022, wine companies are receiving a subsidy if they purchase and process at least 100 tons of green Rkatsiteli or Kakhuri grape varieties grown in the Kakheti region, and if the company pays at least 0.90 GEL per kilogram for the fruit. If these two conditions are satisfied, 0.35 GEL is subsidized from a total of 0.9 GEL per kilogram of grapes purchased (ISET Policy Institute, 2022). Moreover, the GoG provides a subsidy of 4 GEL per kilogram for Alksandrouli and Mujuretuli grapes (unique grape varieties from the Khvanchkara “microzone” of the north-western Racha-Lechkhumi and Kvemo Svaneti regions), if the buying company pays at least 7 GEL per kilogram for those varieties (Administration of the Government of Georgia, 2022). Overall, about 150 million GEL (54.2 million USD), has been allocated to grape subsidies in 2022.

POLICY RECOMMENDATIONS
Although the National Wine Agency is supposed to implement support programs in various areas like quality control, market diversification, promotion and R&D, these areas lack funding, as most of the Agency’s funds are spent on subsidies. Given that production and processing of grapes have increased over the years, subsidies have been playing a significant role in reviving the wine sector after the collapse of the Soviet Union (Mamardashvili et al., 2020). However, since the sector has been subsidized since 2008, the grape market in Georgia is heavily distorted. Prices are formed not on the basis of supply and demand, but on subsidies, which help industries survive in critical moments, but overall prevent increases in quality and fair competition. They further lead to overproduction, inefficient distribution of state support and preferential treatment of industries (Deisadze, Gelashvili, and Katsia, 2020). After years of subsidizing the sector, it is hard to remove the subsidy and face the social and political consequences of such action.

Nonetheless, in order to support sustainable development of the sector, it is recommended to:
1. Replace the direct state subsidy with a different type of support (if any) directed towards overcoming systemic challenges in the sector related to the research and development of indigenous grape varieties and their commercialization level.
2. Further promote Georgian wine on international markets to diversify export destination markets and ensure low dependence on unstable markets like the Russian market. Although wine exporters have in recent years entered new markets, to further strengthen their positions at those markets, it is vital to:
• Ensure high quality production through producers’ adherence to food safety standards.
• Promote digitalization – e-certification for trade and distribution, block chain technology for easier traceability and contracting, e-labels providing extensive information about wine etc. – enabling producers to competitively operate in the dynamic environment (Tach, L, 2021)
• Identify niche markets (e.g., biodynamic wine) and support innovation within these sectors to ensure competitiveness of the sector in the long-term (Deisadze and Livny, 2016).