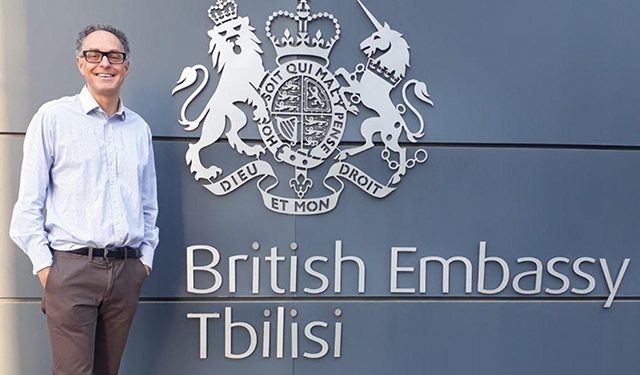 The UK allocated £5 million for Georgia so that the country can protect itself from Russian cyber-attacks. Its people chose to leave the very Union the Georgians currently aspire to join. It’s media environment can be said to be exemplary, while Georgia’s citizens still struggle to find fair and balanced reporting. These topics and more are what GEORGIA TODAY met with UK Ambassador to Georgia Mark Clayton to discuss.

“The five million pounds support for Georgia, that we announced just a couple of weeks ago during the NATO summit, is actually an expansion and a continuation of long-standing program that we have working with Georgia on cyber security,” he tells us. “I’m really pleased we’re able to announce that expansion. It’s certainly a priority area of work of this embassy, and that will continue, I’m absolutely confident, for the foreseeable future.”

The Ambassador notes that the five million pounds for cyber security comes against the backdrop of a large and expanding relationship on defense and security that covers defense capability, building and training on both the NATO and UK bilateral channels.

“We also have an extensive relationship in Georgia on countering disinformation, which is really important in the current times,” he says. “We work intensively with the Georgian government and with civil society on tackling Georgia’s protracted conflicts. There are large programs and a lot of engagement on political reform and democratic institution building, governance in particular, where we’re supporting the growth of Georgia’s civil service sector. And then there’s an important economic and trade relationship. I put in that sphere the work that the British Council does to support the creative industry, to support cultural ties with the UK and Georgia and, critically, of course, the work that they do in English language training as an investment in Georgia’s future, an investment in the next generation, and an investment in Georgia’s economy – better levels of English for everyone will help Georgia’s continued integration into the wider European economy, and that’s a positive thing.”

Georgia is on its way to getting EU candidacy status. But the Union we want to join saw the UK leaving two years ago. What would you, as a representative of that country, advise us to do?
Well, it’s not my position to advise Georgia to do anything. But what I would say is that there is a fundamental, really important principle at stake here, which is the very basic principle of democracy. The British people voted in a referendum and said that they wanted to leave the European Union, and that’s what we’ve done. As far as I’m aware, opinion polls in Georgia say consistently that the Georgian people want to join the European Union and NATO. Every major political party out there says their goals are to support that wish and move towards the EU and NATO membership. So, then, the question is – if you’re serious about respecting that democratic will and serious about democracy, the job of the political class and Georgia’s leadership is to do everything they can to work towards that goal. The EU has been really clear in setting out what steps Georgia needs to take to meet that goal, and the UK will continue to support Georgia in doing so.

British people decided to leave after some years’ experience of being in the EU. The question is, for those who have never been in the Union, what should we be aware of or careful about when it comes to being an EU member?
There’s nothing to be careful about. The European Union is an organization which very clearly defines expectations, rules and procedures. They are very clear. They are set up in a hierarchy, they are set up in the Copenhagen criteria. Georgian people say they want to join the EU, and the job of Georgian politicians right across the spectrum is to work together to that goal and to get Georgia on track to meet those criteria – That’s the key challenge.

The war in Ukraine changed European architecture once and perhaps for all. The trilateral alliance idea is no longer the subject of discussion. What challenges do we face right now, and might we see some other “alliance” initiatives coming from the UK?
The trilateral alliance, as you call it, has had, probably, undue attention here in Georgia. The UK, together with Poland and Ukraine, established a memorandum of understanding on cooperation and security matters. It was an aspiration to capture a really strong relationship that we already enjoyed with both Poland and Ukraine on security issues and defense. That memorandum is in action right now to support Ukraine while it’s under attack from Russia. I think the whole issue of the alliance has become a bit overblown locally. I agree that Russia’s unprovoked attack on Ukraine has completely upturned European and, in fact, global security. The UK, along with a whole bunch of allies and partners, is really very clear – We will continue to support Ukraine in defense of its sovereignty and territorial integrity, and we will do so until Russia fails.

When it comes to the wider European security architecture, I think we’re also very clear. NATO, along with the UK, will always remain the bedrock of European security. It’s a sign of both: how catastrophic Putin’s miscalculation has been but also how important NATO is for European security. As a result of the invasion, we’ve actually seen as the alliance getting stronger, you’ve got more commitments for troops in defense material to the alliance, you’ve got a committed resolute alliance which, in a way, is stronger than ever. Critically, you’ve had Sweden and Finland joining, so the alliance has become stronger.

But I think, my government is also really clear that European security doesn’t stop at the borders of the alliance. The Prime Minister and Foreign Secretary have been really clear that we have to do more to support countries which aren’t in NATO but which are at the risk of aggression and threat from Russia. They explicitly named Georgia in that list, alongside Moldova and the Western Balkans. At the NATO summit a few weeks ago, the alliance agreed a new package of support for Georgia, and the priorities in the future will see us making sure that the UK is playing its part in delivering that package, building on the really comprehensive package of support that the UK’s already giving on defense.

In the past few months, we’ve seen an unprecedented polarization between parties in Georgia. Tell us your opinion on that and what ways there might be out of this deadlock.
I’ve said this before: Georgia is not unique in having a polarized society. There are societies all around the world polarized on different social issues. For me, the challenge for Georgia is not polarization – It’s personalization. There is a really clear task, and I feel really strongly about it: The Georgian people said they want the European Union and NATO membership. Every single party out there says they want the European Union and NATO membership. So, the task is for the political elite to stop squabbling and actually work together to deliver the common goal the people said they want and, when it comes to EU membership, to meet that list of actions to take.

As far as I can see, participants spend more time accusing each other of polarization than actually cracking on with the job in hand, and I feel very strongly that the recent attacking of Georgia’s greatest allies and partners, the criticism in the media that we’ve seen of the US, which Georgia regularly names as a strategic partner, criticism of the European Union, claiming that the EU and US want to drag Georgia into a war, is a total distraction from the job in hand.

I really hope that in the future, as well as stopping attacking each other, Georgian politicians will also stop attacking their foreigner partners and crack on with doing what the people have asked of them.

What will be the reaction if this attack on our Western partners continues?
There is shortage of good will and support to Georgia, and the UK, alongside our allies and partners, is working hard to support Georgia on its Euro Atlantic path. It makes it harder for all of us to defend Georgia and to support Georgia, persuade our leadership at home to support Georgia, when those sorts of attacks continue. So, I would very much hope that they end soon and, as I said, that those across the political spectrum set to tackling the job in hand.

While the opposition is antipathetic towards some of the media, the ruling party has an aggressive attitude towards critical TV channels. How to solve this problem?
Georgia has certainly got a rich and varied media landscape, but I hesitate to call much of it independent, and it’s certainly a very different landscape to the one operating in UK, where standards of public service broadcasting are extremely high and all outlets, no matter what their backgrounds are, are obliged by law to actually present a fair and accurate picture of the truth. So, I think, certainly over the time I’ve been here in Georgia, it’s very clear to me that the Georgian media landscape operates very differently to the UK.

Work needs to be done to make progress on the EU and NATO membership, and the situation in the world doesn’t make that easy. The conflict in Ukraine and Russia’s unprovoked attack on Ukraine continues. The economic consequences of that are becoming very acute. There are plenty of problems to be dealt with. What the Georgian public deserves is an honest, open and transparent discussion and debate with the political leadership that allows them to understand what’s going on and to critique what the government and the political leadership across the board are doing.

The media is a key vehicle for getting those massages across and getting that information out there. The fracturing of the media landscape which reflects the polarization we talked about earlier is not helpful in that regard. I would encourage all politicians to take advantage of all the channels that are open to them to get the point across and engage in principle debate rather than personalized attacks on their opponents.