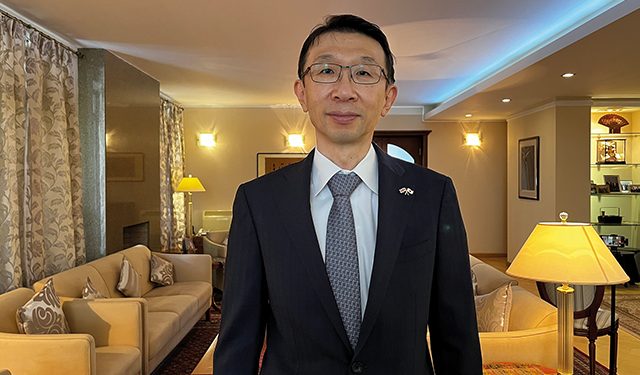 It is regrettable that the relationship between Georgia and Japan, both in themselves ancient countries, started just 30 years ago. But, since then, The Land of the Rising Sun and The Land of Wine have become very good friends, despite their cultural and religious differences, as what unites us is our values. These two countries stand together and symbolize how strong value-based relations can be, even when thousands of miles away from each other. And what has been achieved over 30 years needs to be preserved and improved, with both seeeking to complete the bridge-building in economic, as well as cultural terms. GEORGIA TODAY, as an observant of the process, met H.E. Mr Imamura Akira, Ambassador Extraordinary and Plenipotentiary of Japan to Georgia, to ask him to sum up the development of relations over the course of 30 years and to share his opinion with us on the current challenges Georgia faces.

30 years of diplomatic relations are being celebrated this year. Could you sum them up and, more specifically, tell us about the achievements made since your appointment?
Japan and Georgia have been developing very good relations in many areas, in politics, economics, and cultural ties. Its strength over 30 years has always been shared values of democracy, human rights, the rule of law, and freedom. That’s why we’ve strongly supported Georgia’s nation-building, sovereignty, and territorial integrity. We’re one of the leading countries supporting Georgia’s reconstruction efforts after the 2008 war. We’re very pleased to see the development and progress Georgia has made over the course of 30 years. And we’re very proud of our achievements. I came to Georgia at the end of 2020. It was in the middle of lockdown, so, naturally, my focus was to help Georgia mitigate the impact of Covid-19 on society and the economy. We implemented several projects providing medical equipment and training to medical personnel. We also offered a soft loan to small and medium size businesses that suffered most during this difficult time.

As we moved into 2022, we organized more cultural events to celebrate our shared anniversary: An exhibition, a Sakura tree planting, Tea Ceremony, events in the sphere of music, literature, even a Sushi exhibition and Anime film show. We’re going to continue this towards the end of this year.
Russia’s invasion of Ukraine prompted our countries to coordinate our policies closely, so in April, we organized a foreign ministers’ meetings. In May, our parliamentary vice minister visited Tbilisi. In August, in commemoration of the 30th anniversary, our prime ministers and foreign ministers exchanged letters. In his letter, our Prime Minister, Fumio Kishida, offered to take the potential of cooperation between Georgia and Japan even further.

Can Georgia and Japan expand the scale of economic relations? Are there any obstacles?
For 30 years, most of our economic relations were led by donor-recipient ties, and our business-to-business cooperation lagged behind, although we’ve seen very strong car trade and investment decisions by Japanese energy giants like TEPCO regarding Georgia. The task for the Georgian and Japanese governments is to promote these positive tendencies.

In my first year here in Georgia, we strengthened the legal framework for promoting and protecting investment by signing two treaties, the Investment Treaty and the Taxation Treaty, with Georgian government ministers. This year, our priority is to provide information to Japanese businesses, especially from the Georgian government, about what opportunities and challenges there are for Japanese companies interested in doing business in Georgia. In Japan, Japanese companies are a little bit concerned about the impact of the war in Ukraine, thinking that it may spill over into Georgia. We’re planning to hold a Japan Business Forum at the end of October – beginning of November here in Tbilisi, with the participation of Japanese companies. We’re hoping that through this forum, Japanese companies will receive objective information and come to better understand the advantages of doing business in Georgia.

The increasing polarization has become a vital issue for Georgia. What would be your advice for the political parties, media and society?
I think Georgia has to seriously address this huge question of polarization, promote constructive dialogue between different political parties, build consensus, and learn to make compromises. This is the essence of the democratic process in any democracy. My advice is to stop criticizing persons or personalities and focus on the debate on policies. You have to very much respect each other in the political debate. In Japan, we have an ‘honorific form’ in our language and, almost without exception, when Japanese politicians debate with each other, they use this honorific form. This is a sign of your respect towards your counterpart.

My second piece of advice is to have independent media. In Georgia’s case, I would say that Georgian media is a little too politicized, and independence has to be straightened out; otherwise, this politicized media exacerbates the current polarization in politics even further. Media independence is necessary for people to receive unbiased information, not one-sided, but different opinions, so that they can make a judgment themselves.

The accusation is that the US is interested in dragging Georgia into the war. What’s your opinion as an ambassador of a country which has a close partnership with the US?
Well, I would like to refer you to the ambassadors of the United States and the European Union on this issue. I fully support their position. I don’t think the US or the EU were trying to bring Georgia into the war or open a second front. I think these are just false allegations based on ungrounded assumptions; it may even create the false impression that Georgia is not serious or even weaker in its commitments toward Euro-Atlantic integration. But I think the people’s choice has already been made towards its Euro-Atlantic aspiration, which I very much support. Some may say, while criticizing the West, that Georgia cannot become a member of the European Union, and it should better stick to its traditions. This is totally ungrounded. Look at Japan. Japan demonstrated that we could achieve mature democracy while preserving our unique traditions and culture. I think these two are not incompatible, and sometimes mutually complement each other. So, if Japan was able to do it, why not Georgia?

Besides political polarization, attacks on Georgian media are also problematic. What would your advice be?
I think the safety of journalists in Georgia is under question right now. It’s an essential part of democracy; it’s closely linked to media freedom. If journalists are not safe, there will be no freedom of media at all. So, when we heard about this July 5th incident, when many journalists were attacked, we were shocked and condemned the perpetrators. We called for those responsible to be held accountable. We’re very much concerned that this situation is continuing – the threat towards journalists in Georgia is too often heard. We want to contribute to the betterment of the environment for the journalists, for them to be safer and protected legally, and we have contributed to a fund called the “Global Media Defense Fund” administered by UNESCO. This was created to help NGOs in member countries to promote this kind of better environment for journalists’ safety and advocate for the importance of the safety of journalists. So, if there are any interested NGOs in Georgia, I would encourage them to submit a proposal for projects to promote this important protection of journalists in Georgia even further.