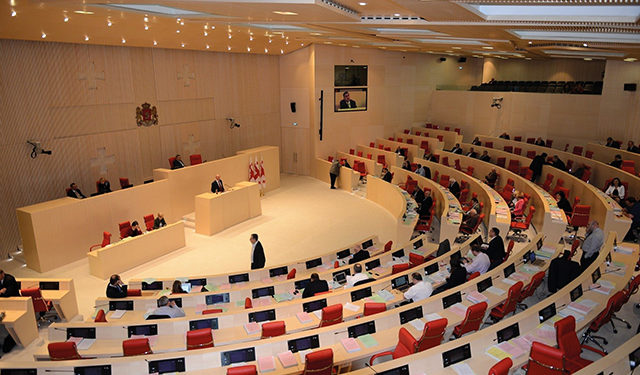 All 51 opposition MPs who requested the termination of their mandates are to remain Members of Parliament, as this week none of the members of the ruling Georgian Dream (GD) party voted for termination of their mandates.
As such, the boycotting opposition formally remains in Parliament.
Irakli Kobakhidze, GD Chairman, noted that with this move, the ruling team is giving the opposition “yet another chance” to get involved in the democratic process and fulfill the requirements of their electorate.
He added that based on the information obtained by GD, up to 20 more opposition lawmakers are willing to enter Parliament; however, they refrain from doing so due to pressure from other members of the opposition.
In turn, opposition members assess the move of the parliamentary majority as “yet another attempt to continue trading with mandates and dragging people into Parliament.”
51 out of 60 opposition MPs filed applications for the termination of their parliamentary mandates. They are demanding the termination of their mandates obtained as a result of the October 31 parliamentary elections, as they believe the results were rigged by the incumbent government.
At Tuesday’s session of Parliament, Avtandil Enukidze was elected as Vice-Speaker from the opposition quota. He was supported by 82 votes for the post. His candidacy was presented to Parliament by the deputies from the ‘Patriots Alliance’ electoral list. Despite the party’s boycotting of Parliament, in January, Enukidze entered Parliament together with deputies Fridon Injia, Davit Zilfimiani and Gela Mikadze, replacing the first three numbers of the party’s list Irma Inashvili, Giorgi Lomia and Gocha Tevdoradze, thus separating himself from the Patriots’ Alliance and creating a new party, the ‘European Socialists.’
Two members of the opposition, Aleko Elisashvili and Levan Ioseliani, representatives of the Citizens Party, started performing duties as MPs on Tuesday.
They made the decision to enter Parliament on January 29 after reaching a final agreement with the ruling party Georgian Dream. A memorandum was signed between the Georgian Dream and the Citizens Party, based on which the signatory parties agreed to the implementation of a fundamental electoral reform.
Elisashvili advised the boycotting opposition “not to be the hostage of their words, and to start working in Parliament,” adding that the country does not need a revolution.
He noted that the issues agreed with the ruling party should be initiated at the legislative level before March 1, otherwise he and Levan Ioseliani will leave Parliament again.

President Calls on the Opposition to “Think Carefully”
The President of Georgia Salome Zurabishvili addressed the opposition and majority Tuesday morning, before the vote for the termination of the mandates of the opposition lawmakers in Parliament.
Zurabishvili called on the opposition to think carefully, and the Georgian Dream to refrain from making a hasty decision.
“Recently, Georgia has moved to a full parliamentary system, and with the recent elections, people elected a multi-party parliament, which is a new level of democracy.
“Today, the country needs to fully implement this system! Time is running out! The crisis caused by the pandemic requires an efficient, fast-acting parliament and a reasonable approach from everyone! Political controversy cannot meet these difficult challenges! It is time for unity and solidarity inside the country, as well as at the international level!
“At this important stage, the opposition has a big role to play: first, because it has never been so strong in parliament – 60 seats out of 150, eight opposition parties,” said the President.
She noted that the opposition has a great responsibility to the electorate, as they promised victory and not to stand in the streets.
“I call on both sides to make sensible decisions, which will be a step in the best interest of the country and not aimed at narrow interests. I urge the opposition to think, respect their voters and fulfill the obtained mandates. I call on the majority not to give in to the temptation of a single-party rule, refrain from a premature decision on opposition mandate termination, and give the opposition more time to make the right decision. It is the demand and expectation of our society. We should all respect and take care of it,” the Georgian President said.

US Ambassador: I Hope Political Parties Will Work Together in Parliament
On Wednesday, US Ambassador to Georgia Kelly Degnan said she believes that the leaders of political parties, in order to achieve a compromise on the differences between them, should give priority to the interests of the country and take into account the opinions of the voters.
“Georgian people say in various polls that the main problems for them are unemployment, high prices, and poverty. They also say they want MPs to work together on these issues in Parliament. I hope the parties will take this into account when discussing the various options for overcoming the differences between them,” the Ambassador said.
She expressed hope that the urgency of the issues that concern Georgian society will push the political parties to work together in Parliament.
“I hope the party leaders will put the interests of the country first, listen to what is important for the voters, and that is jobs, high prices, poverty, and the economic consequences of COVID-19. I believe the urgency of resolving these issues will push the parties to reach a compromise, find solutions to the problems, and come to Parliament to work on these issues,” she concluded.

EU Amb: Maintaining Mandates for Opposition MPs was the Right Move
“Yesterday, Parliament decided not to terminate the mandates of opposition MPs, which, I think, was the right move. This is a precondition for maintaining the dynamics of continued negotiations,” EU Ambassador to Georgia Carl Hartzell told reporters on Wednesday.
“I believe that all the opportunities that will allow participation in the work of the parliament based on their role will be the only good result. The rest, in my opinion, will be an unfavorable situation for everyone, because it will be the failure of the ruling party, the failure of the opposition and, most importantly, the failure of Georgian society,” said the Ambassador.