Afghan Fallout: Consequences and Repercussions for the Region 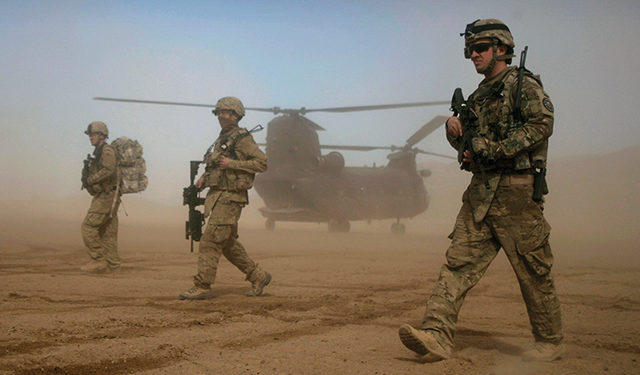 The withdrawal from Afghanistan has dynamized discussions of the West’s alleged retreat from peripheral areas and growing focus on a single core region.

The line that separates those regions of the world in which the West continues to pursue and defend its interests on a must basis from those secondary ones, in which the West could or would intervene on a highly discretionary basis only and if a broader context is served, has shifted westwards and currently lies between the Black and Caspian seas.

This region has not only become a border along which geopolitical interests and influences clash, but also positions itself as the key “safety locker” for the many security challenges originating in the Middle East, South Caucasus and southern flank of Eastern Europe. The role and impact of the Black and Caspian intermarium have indeed never been so meaningful and vital for the emerging Eurasian landscape as they are nowadays.

Besides, it is a new test for the West to prove its resilience, capability and commitments in the new order that will arguably be premised on the regional proxy systems (the so-called regional hub-and-spoke model) of the emerging international order. It is even more important for the West to increase the direct support it provides to upgrade the capacity of its allies and partners to defend themselves in those regional systems in which the West’s presence is not as direct or tangible as some would wish. The Black Sea is clearly such a region, in which Western interests are reflected in Georgia’s regional posture and conduct, national defensive capabilities and unwavering foreign policy.

Indeed, this country finds itself in the cross-hairs of anti-Western and anti-democratic offensives of various types, colors and categories. A successful Western and democratic Georgia would therefore serve as a test of the viability of the principles and values of the Western normative world. These two sides of the matter are nowadays so strongly interconnected as to be inseparable.

Since we mentioned Georgia’s connectedness with Western geopolitics and the West’s security architecture, it is also worth noting that, over the years, the country has actively participated in various NATO-led operations in Afghanistan, notably the International Security Assistance Force (ISAF) and the Resolute Support Mission (RSM). In 2012-2014, Georgia had up to 1500 soldiers in Afghanistan: a remarkably clear and tangible demonstration of Tbilisi’s commitment to common principles and interests.

More recently, we supported the withdrawal of NATO and partner forces from Afghanistan, providing host nation support and full transit facilities through our territory. We have also made significant contributions to various humanitarian aspects of the process. An interagency task force, set up by the Georgian government, provided critical input to ensure the transit of forces and personnel and related support measures. Last but not least, Tbilisi agreed to help several international organizations (e.g. the Asian Development Bank, the International Monetary Fund and the World Bank) to evacuate their staff and provide them with temporary accommodation in Georgia.

The controversy in Afghanistan has added to the regional dilemma in the aftermath of the Second Karabakh War, and the United States needs to demonstrate their dedication to pursuing efforts to develop relations with key allies in this geopolitically important region. Specific statements embodied in tangible actions must contribute to shaping Washington’s Black Sea strategy concept along very clear lines, particularly as any delay in this process would further aggravate the security environment, eventually making any future U-turn quite hypothetical.

What the region needs today is explicit American and more generally Western efforts to deepen trade and economic ties with regionally important nations. In addition to trade and new investments in geopolitically viable opportunities, Georgia also expects a precise roadmap and timeline to NATO membership, or, should the prospect for such membership continue to remain unsure, we clearly need to open discussions with strategic partners on alternative, “compensatory” modalities to upgrade our own security by transforming our strategic partnership into a strategic alliance. Moreover, this transformation must be fast-tracked by innovative, bold and creative leaders at both ends of the process.

Obviously, there are other pragmatic reasons for the West, and especially the Unites States, to deepen cooperation with the countries of the Black Sea and Caspian basins. Abandoning Afghanistan does not mean also abandoning a critical region full of controversies and serious challenges. Among these challenges are the threats posed by various militant networks, be it Jihadists or others, in Afghanistan proper and the wider region, as well as the unpredictability of the new Taliban government. Although the latter has promised to sever its links with various terrorist groups, it remains to be seen how this promise could be fulfilled. That said, there are of course no assurances that militant groups rooted in and around Afghanistan will stop threatening other countries in the region, or even the United States.

Therefore, some nearby presence of US troops is critical to monitoring, assessing and reacting if and when required. During the Geneva summit, President Putin took a firm stance against any US presence in Central Asia regardless of the form this may take, e.g. basing drones, deploying anti-terrorism units, etc. The problem is compounded by the logistical difficulties posed by the great distances to be covered by US aviation based in Qatar in order to reach Afghanistan and the wider region. Besides, both Russia and China are opposed to the very principle of any US return to Central Asia. These days, Russia is positioning more as a security guarantor, while China is primarily contributing to the economies of Central Asia.

Although it is a noticeable recent trend for China collaborating with the Shanghai Cooperation Organization, there is also an uplift in China’s security ties with Afghanistan and Central Asia states.
We must also not forget the characteristic reluctance of Central Asian countries to harbor foreign troops on their territories. Understandably enough, in both their actions and messages, the various governments of Central Asia have to tread carefully when dealing with the main actors, particularly as the risks for their region are real, even if Russia and even the United States have been exaggerating them for the past 20 years.

All these complexities lead us to the need to identify some other viable options, and I believe that the wider Black Sea region presents us with some feasible opportunities to contribute further to the efforts of the Western coalition to combat international terrorism and extremism. All in all, the Black Sea and Caspian regions are critically important to the greater Eurasian security landscape. In this regard, the US withdrawal from Afghanistan signals the entry into a new stage of the Great Game for Power. Recent meetings in Moscow between officials from Russia, Afghanistan, China, Pakistan, Iran and India clearly herald new geopolitical spirals. It could also be predicted that the wider South Asia-Central Asia-Caucasus region may fall prey to a new wave of terrorism and radicalization. There is an undoubtedly clear appreciation at our end of the need for new bonds to be forged with our allies and partners that better pursue our common interests. There is indeed no real alternative to this unique “win-win” option, and the United States and our other partners clearly need to devote greater efforts to defining and implementing a strategic vision for the Greater Caspian Sea region.

*An abstract from the speech at 16-17 November 2021 Caspian Security Conference organized by the Caspian Policy Center and the Near East South Asia Center for Strategic Studies (NESA Center) of the U.S. National Defense University