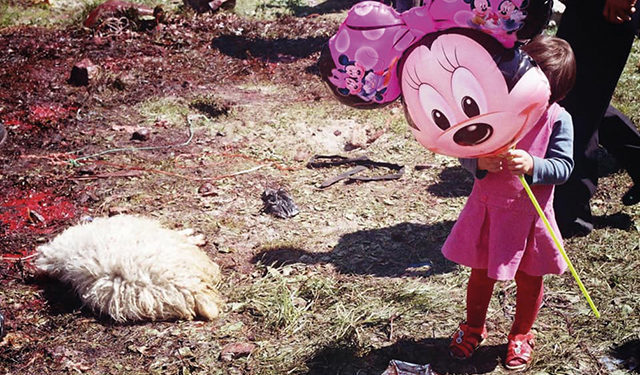 As per tradition, vegans and animal rights activists of many ages and nationalities, the majority of them Georgian, united on Rustaveli Avenue last Saturday, ahead of the annual Lomisoba festival, to protest the ritual slaughter of animals in the name of religion.

Lomisoba is a festival held at Lomisa Church on the ridge of a mountain near the route to Kazbegi, where the boundary line between Georgia and South Ossetia cuts through the courtyard of the medieval church.

The festival dates back to pre-Christian times, but is now celebrated as a Christian religious festival, despite the ongoing inclusion of many pagan rituals, such as mass animal sacrifice, which involves the slaughtering and beheading of sheep, calves and chickens, sometimes in front of the eyes of children.

A plethora of wine and meat is traditionally consumed during the festival, with families, having received blessings from the priests in the church, setting up picnic spots not far from the blood-soaked ground.

“Mass animal sacrifice is an integral part of Lomisoba and other local festivals. Certain mandatory rituals are performed before animals are slaughtered, including singeing off hair behind the animals’ ears and on their belly,” writes Veronika Malinboym of JAMnews. “The slaughter of sheep, chickens and cows is believed to grant fulfillment of all wishes and bring well-being to families in Georgia.”

“We’re not protesting the festival itself,” one demonstrator said on Saturday. “We’re against the use of animals in the process. They suffer. They feel pain and fear. They smell the blood around them before their throats are slit. And the children that go along with their parents see this. Some become traumatized. 21st century Georgia shouldn’t support such traditions. It’s cruel, unnecessary, outdated and unsanitary.”

While the 20-odd protesters maintained their promised peaceful protest, interrupted by cries of “Free Misha” and “Hare Krishna” from other events happening nearby, police in front of Parliament seemed restless, throwing aggressive looks towards all present.

When the group notified the policemen of their intention to walk with their placards to the Patriarchate (residence of the Patriarch of All Georgia, Ilia II) on the river bank, as they have done in previous years, the police became agitated and encircled the organizers.

“We warned the protesters that if they go to the Patriarchate, they are likely to clash with religious groups, whose feelings they will offend,” one police officer said, citing a desire to protect the protestors from this outcome. 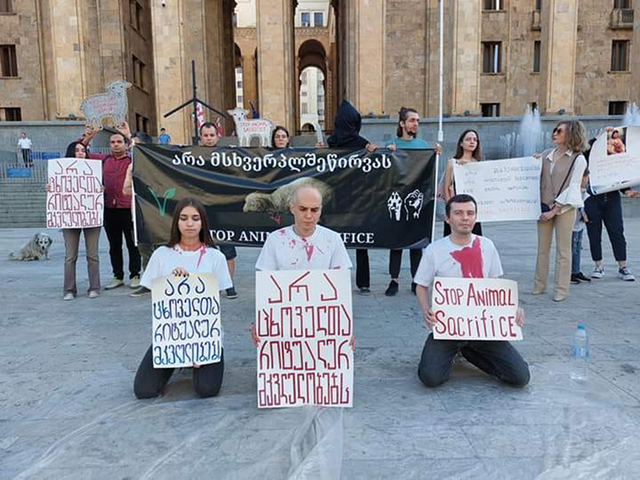 When the group quietly made to leave, the police blocked their path and, claiming public disturbance, then arrested and took away two of the organizers. Remaining protesters were then escorted as far as Liberty Square and told to disburse. The two arrested were released later that day.

“We’ve never had any problems with police in the seven years we’ve been doing this,” said another organizer. “We were just as peaceful as ever in our protest. But something changed this year.”

“We just don’t think animals should be killed,” said eight-year-old Tornike, at the rally with his mom and elder sisters. “It makes me sad.”

With precious few in the Church speaking out against animal sacrifice, the tradition continues to stick, and Georgians in the regions still rely on blood sacrifice to try to reach the benevolence of a higher power in the hopes of curing their ills. And despite recognition that it is an unsanitary practice, authorities are reluctant to position themselves against the Church and its voting members.

The Lomisa Legend
In the 13th century, when the Khwarazmid Army, headed by Jalal-Ed-Din, invaded the country, 7000 inhabitants of Aragvi Gorge were taken hostage. Those captured took the icon of St. George with them. According to the legend, the icon brought a drought on the Khwarazmid country. The frustrated Sultan asked for magicians, who claimed the reason for this disaster was the icon stolen from Georgia. The Sultan ordered the icon to be burnt, but it flew out of the fire and landed on the horns of a bull. The bull, with the icon in place, did not move until the last hostage was set free. The 7000 Georgians returned to their homeland, and in every place they stopped, they built a shrine.