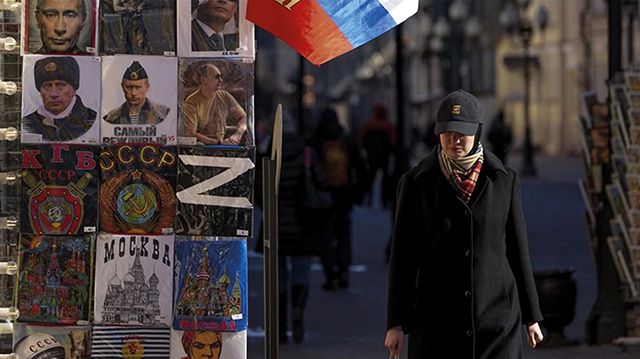 A view of a gift shop in Moscow, Russia, selling souvenirs and products with the letter "Z” among other Soviet and Putin motifs. By Pavel Pavlov/Anadolu Agency

In the lead-up to the Russian invasion of Ukraine, many analysts and observers noticed military equipment bearing particularly unique markings. Social media was rife with videos of tanks painted with English letters, one in particular being not used in the Cyrillic alphabet. “Os,” “As,” and various other symbols painted somewhat crudely onto these vehicles. The internet was bustling with speculations and theories as to their meaning.

After the initial invasion, several open source intelligence sources began to piece together how these various insignia were organized. With the multiple invasion points, and the similarity of many of the armored vehicles used by both sides, these became an easy way to identify friends and enemies on the battlefield.

Of these “Identification Friend-or-Foe” symbols, commonly abbreviated in military circles as IFF, the most prominent was the Latin letter “Z.” This rapidly became an ideogram of Russia’s intentions in Ukraine. In short time, it emblazoned buildings, flags, cars, and even children’s clothing. People painted this, especially in the orange and black colors of the Ribbon of Saint George, across the Russian and Eastern European world.

“Z” became a symbol of Russian aggression almost overnight. Some Western media and commentary sources have compared it to the Swastika of the Nazi Party in the 1930s, along with the fascist ideological statements behind each. Many media outlets coined the term “zwastika” to frame this comparison. As a result, some countries, Georgia included, have taken steps to restrict or outlaw the use of the letter in public usage.

In Russia, the letter has become a symbol of loyalty to the Kremlin. The Russian Ministry of Defense has stated that the letter is an abbreviation of their battlecry “for victory,” or in Russian Cyrillic “за победу.” They later changed the meaning to something more palatable to Western tastes, stating it meant “for peace, or “за мир.” Both statements in Russian start with the same “z” sound.

It is more likely these were reactions rather than a planned propaganda move. Many others in the military analysis community have stated that the “Z” was meant for the Russian word “zapad,” or “запад,” meaning “west” and was a battlefield signifier for the western portion of the invasion forces. This theory became more verifiable, as the other symbols coincided with this model. The Latin letter “V” was theorized to be shorthand for “vostok” or “восток” meaning “east.”

However, both of these statements came after the popularization of the “Z” symbol in social media. As shorthand for support for the Russian invasion, it was the easy method to show your side in the conflict. Yet, while many used the blue and gold of the Ukrainian flag to show their opposition. lately, there has been another flag making its colors known.

A recent group has begun to show its prominence in Ukraine, as well as various cities across the Russian Federation. While this new “Freedom of Russia Legion” has been seen active as a military unit in Ukraine, they have gained a following in Russia as a form of resistance. Multiple attacks on police and local infrastructure have been attributed to them.

A part of their efforts have been framed by the use of the Latin letter “L,” shorthand for “Legion” in white and blue colors. This color selection is supposedly from the Russian flag without its red bar. Many in the opposition see the Russian flag as a sign of imperialism, militarism, and authoritarianism, the red bar being a key part of this.

This resistance indicates a fracturing of Kremlin control over the country. While Russian media has scrubbed all mention of these groups, their prevalence is noticeable in some social media and open source information sources. While many of the incidents inside Russia can’t be verifiably attributed to these groups, the frequency and location of these attacks lend to the probability that the “L” is targeting these vulnerable points with precision.

The Kremlin relies on a strict regime of curated information and dominion in the proverbial “town square.” Any faction that splits from the authorized narrative is found and crushed with impunity, as has been seen with famous dissident Alexei Navalny. An anti-corruption activist, he has been silenced and jailed due to his perceived inability to follow the Kremlin’s line of information.

While these symbols are only a graphic representation of the ideological campaigns that follow them, the “Z” and the “L” are beginning to clash. This competition has the potential to tear Russian society apart, leaving the Kremlin with more than it can handle. This separation is reportedly already occurring behind closed doors at the top of Russia’s elite. With many beginning to question the viability of Russian President Vladimir Putin’s operation in Ukraine and the stability of his control, this war of words, or letters, could be the catalyst for significant change across the Russian Federation.