“A Threat to Belarus’ Sovereignty” – Pavel Latushka on the Union State, Migrants, and the Putin & Lukashenko Paradigm 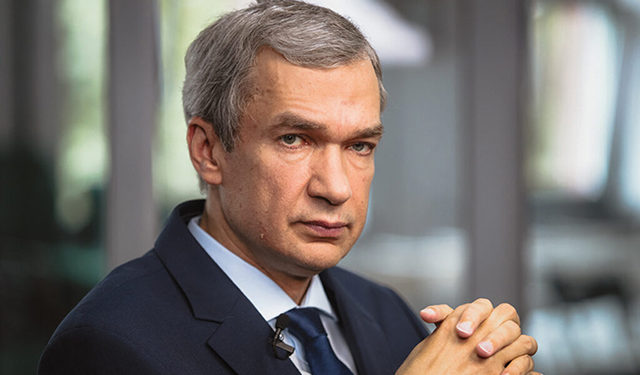 Last week we witnessed yet another Lukashenko maneuver: the Belarus strongman smuggled thousands of illegal migrants across Belarus to the Polish-Lithuanian border in a self-styled response to EU sanctions.
The influx of migrants, which Brussels has dubbed a “hybrid attack” and “gangster tactic” on the EU, exacerbates internal tensions in the EU, which no doubt both Lukashenko and his main ally Putin are happy to achieve, as the West has less time to respond to the dire situation in Belarus itself.

What should the West’s answer be? What is the strategy of the Belarusian opposition? What are the Belarusians going to do if Putin decides to complete the “Union State” project with Belarus? GISP spoke to one of the opposition leaders and former Belarusian Minister of Culture, Pavel Latushka.

The illegal migrants issue – Lukashenko and the Kremlin have been using it to create turmoil in Belarus’ neighborhood. What should the West’s response be?

As a former minister of culture, I realize that the humanitarian angle is of utmost importance here – saving peoples’ lives should be the top priority. Lukashenko is using these people as instruments of war against the European Union. As a diplomat, I realize how important it is to have one’s borders secured; as a politician, I cannot understand why the EU isn’t using the leverages at its disposal – the rule of law, first and foremost. If we are dealing with an organized crime group here, and everybody can see that it’s a special operation orchestrated by Lukashenko and his cronies to cause turmoil, then why is there no question about criminal responsibility for Lukashenko? Why aren’t there any suits against him related to the deaths of these migrants? Start an international court trial and summon Lukashenko there to argue his defense- that would be the adequate step. And then there is the economic leverage – sanctions tailored to the situation, where Lukashenko has to pay for every migrant. He is earning money on them today, so make him pay for it, so that he starts thinking whether it’s worth it.

While the opposition shows no signs of slowing down, it’s also safe to say that Lukashenko isn’t going to hand over the reins of rule voluntarily anytime soon. What’s the current stalemate and whose side is time on?
Even Russian opinion polls show that Belarussians don’t trust Lukashenko, and that the majority of them don’t want him to retain the post of President. And Lukashenko himself looks at Belarussians as ungrateful traitors and enemies who betrayed him. Like every other dictator, he needs an “enemy” to fight. His first enemy is the Belarussians themselves, the second is the West, and the third enemy, as much as he doesn’t want to admit that, is Russia.

Today, the Belarusians, despite of their disdain towards Lukashenko, aren’t allowed to express their position. He amended the constitution in a way that even a word written in social media against his regime is tantamount to a crime that can send you to prison for a minimum of 30 days. Fear has become his main weapon to keep the people silent. But this can’t go on forever – the situation is slowly but surely nearing boiling point. He thinks he can prevent it if he puts everyone who wants to speak out in prison and keeps the rest living in terror. He’s building an upgraded version of North Korea. This is impossible for several reasons: one, we live in Europe; two, we live in an age of technology and information; third, Belarusians are smart and they’ve shown that they want freedom and that they’ll fight for it. For these reasons, this scenario won’t be turned into a reality, even though, tactics-wise, Lukashenko might look at his situation and think that it’s in his favor.

Belarusians tried to fight for their freedom a year ago using public protests, but it wasn’t enough. What should be done differently if another wave of public protests begins?
For that, we need a strategy on both the domestic and international front. There are several elements to it:

We need to achieve non-recognition of Lukashenko as a president. Many countries in the world have stated that they don’t recognize the elections as legitimate, but that’s different to not recognizing him as president or recognizing his government. The European Parliament has just done that, but we need the same to happen at the national government level too.

The next step would be holding him responsible for the crimes he has committed through the force of international law, including seizing a plane with international passengers, as well as waging an illegal “migrant war” against neighboring countries, not to mention his crimes against his own people. He is a leader of a crime gang that operates at a governmental level. The legal leverage would be charging him for those crimes and holding him responsible. Work is already being done to create something along the lines of an International Criminal Court case on Belarus.

The third element is sanctions, and they can only be effective when they are timely and hard-hitting. If you drag your feet with sanctions, that gives him time to prepare for them.

On the domestic front, we should be preparing for countrywide, well organized strikes. It should be a unified front of all democratic forces who will call on all Belarusians to go on strike. One of the triggers for that could be the referendum that Lukashenko is planning to conduct in February next year, to basically give himself immunity guaranteed by the constitution.

Let’s assume you achieve some of your objectives. Wouldn’t the increased international isolation of Belarus make it even easier for Russia to force Lukashenko to accept Russian conditions and solutions in bilateral relations?
First off, I must underline that the only suitable scenario for deposing the current regime in Belarus lies in the hands of the Belarusians themselves. It is something Belarusians themselves must do – that’s the cornerstone of our strategy. Then there is another scenario, that we would rather not see occur, but it may happen – that’s the scenario you described. One option there would be Putin singlehandedly deciding that the time has come to remove Lukashenko and impose a new “ruler” according to the Kremlin interests, and another – leaving Lukashenko in place, turning him into a fully controlled puppet.

And while the second scenario is undesirable, the third one is outright unacceptable. As I said, there is no scenario that would turn Belarus into a North Korea for the long term. Let’s also discuss the oft-speculated scenario of Putin ordering Russian military forces to enter Belarus – I don’t think such a scenario is realistic. I don’t believe Putin will command Russian soldiers to shoot at Belarusians. That would be the last day in the post of president for President Putin, because it would be impossible to explain to a Russian why they were shooting at Belarusians.

Why are you so certain that any shooting would be necessary in the first place?
Because Belarusians will take to the streets and they’ll want to make their own decision as to how the country should be governed. If the Kremlin wants to take away that decision from the Belarusians, they’ll have to do it by brute force. I don’t think that’s in the Kremlin’s interests, considering there is also another option available: to control whoever replaces Lukashenko. He is too toxic and high-maintenance for Russia. At this point, today, Russia isn’t ready to incorporate Belarus, but it will be ready to do it at every appropriate chance and in all likelihood, will attempt to do it in a few years. The vast majority of Belarusians don’t want to become a part of Russia, even Russian polls show that, but I’m afraid that if we play the waiting game, hoping that the problems will solve themselves, then that’s just not going to happen. I’m against such a scenario, because that means Belarus only existing on a map and having a flag in the United Nations. Russia doesn’t want Belarus to enjoy the choice of determining their own development – it follows the power doctrines of the last century. Where you have to make an ideological choice, and you’ve got to have an enemy.

Together with the rest of the 28 “integration programs”, how big of a step is it towards the unified state that Moscow is pushing for?
I don’t think anybody could answer that question, because most of these documents are classified and nobody has seen their contents, what Lukashenko and the President of the Russian Federation agreed upon. What we are witnessing is that the man who usurped the rule in our country, has now taken it upon himself to decide its eventual fate as a sovereign state. The idea of a Union State irritates most Belarusians. This should be a transparent matter, and the Belarusian people themselves should be deciding whether they want it or not. It cannot be imposed from above or externally. And if Lukashenko and the Kremlin decide to go that route, then the new government of Belarus will have to annul any agreement reached that way. We consider this a real threat to Belarus’ sovereignty. If the Kremlin want to repeat the scenarios of Georgia and Ukraine in Belarus, that would be yet another colossal mistake for the Russian foreign policy – subjugating a nation, an independent state, through force. Turning Belarusians and Russians into enemies might satisfy somebody’s ambitions in the short term, but it is not a viable long-term strategy in the 21st century.

Could a new regime in Minsk be more pliable and agreeable towards the Kremlin’s insistence on deeper integration?
I would have to upset the analysts in Moscow, but this scenario is not realistic. And that’s partly due to Lukashenko’s presence: as long as he’s here, he won’t allow the creation of any structure that will be on more amiable terms with the Kremlin than he is himself. That would be an existential threat for him. That means that either Moscow is stuck with Lukashenko, or they will have to find an agreement with the new democratic opposition – but Belarus’ sovereignty won’t be a bargaining chip in any such negotiations, I can assure you of that. Any negotiations would have to be on equal terms.

What makes you think that it is in Russia’s interests to talk to Belarus as to an equal partner, instead of turning it into a fully-fledged satellite? Why would the Kremlin settle for less when they think they can get more?
Is it a pragmatic choice to support a dictator and burn bridges to the Belarusian nation, to its people? No. Is it a moral choice? No. Is it a choice based on values? Not really. I think as time passes, this will become more and more evident to Russians themselves. What we can do is to try and expedite that process, this is in our hands. And Belarusians wanted that, but it didn’t happen and Russia played a key role in it. Now they’ll have to put up with Lukashenko, from whom they won’t get any benefits anyway. He dislikes the Russian leadership, he loathed Medvedev and isn’t too fond of Putin either. I am sure Lavrov himself sees Lukashenko as a complete idiot, but he is a diplomat and he has to enact the Kremlin foreign policy. Lukashenko can’t be trusted – he only plays with Putin because he needs to survive. How long Putin is prepared to take it remains to be seen.