A New Fault-line through Georgia 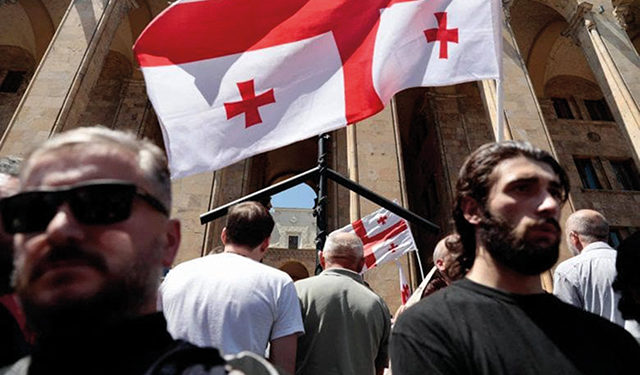 Resistance to novelties, especially those sexual or religious, is bound to cause divisions within society. This in turn causes political tensions, deviation from real problems the country is marred in, and possible repercussions for the country’s foreign policy. Image source: austria.tenzica.com

As emotions subside, it is now time to put what happened in Tbilisi into perspective. In a conservative country such as Georgia, antagonism to all the things liberal could run deep at times. Resistance to novelties, especially those sexual or religious, is bound to cause divisions within society. This in turn causes political tensions, deviation from real problems the country is marred in, and possible repercussions for the country’s foreign policy.

We should frame the violence in Tbilisi from a broader perspective. It is a challenge to liberal ideas and ultimately to the liberal world order. The real danger, though, is in a hybridity of the challenge. A country can be democratic, with numerous parties, active election campaigns and other features characteristic to rule by the people’s consent. Nevertheless, a democracy can be illiberal. Power politics can be a dominating feature and have immense pull on a dominant political force. It allows preservation of political power, denigration of opponent political forces, and most of all the use of various methods of using religious and nationalist sentiments to increase or decrease tensions. It happens across Eurasia, and Georgia is no exception. Illiberalism is agile enough in appropriating ideas on state governance and molding them into the illiberal agenda.

Looking at the rise of illiberalism in Georgia, one cannot ignore the pull Russia has on the country. Connecting all internal problems to Russia has turned into mainstream thinking among opposition politicians, NGOs and at times even government figures. Exaggeration is commonplace, but when looking at the illiberal challenge from a long-term perspective, it becomes clear where Russia got things right. Moscow had to stop Georgia from becoming a NATO and EU member. It did so in 2008. Now, the process drags on, causing frictures across the very fabric of Georgian society. Belief in the ultimate success of the liberal agenda is being undermined; alternatives are being sought. The hybrid nature of the government is the most plausible development, whilt the next stage could well be a total abandonment of the Euro-Atlantic aspirations or worse, an abandonment in essence, but not in rhetoric.

Indeed, what seemed irrevocable now seems probable, if not real. Pushback against Georgia’s Euro-Atlantic choice is growing stronger. Protesters in front of the Parliament in central Tbilisi violently brought down the EU flag. Twice. It might seem irrelevant, but the message was all too clear.

The rhetoric of anti-liberal groups has also been evolving. There has been a significant growth in the sophistication of the messages of violent groups. Anti-pride sentiment evolved into a wider resistance to the Western way of life and Georgia’s western foreign policy path.

To deal with the challenge, Western support is important, but much depends on the Georgian government and the population as a whole. A pushback against radicalism and anti-liberalism should come in the form of a considerable amount of time and resources put into the development of stronger institutions. The latter often falter in Georgia. Urgency in addressing the problem has never been higher than it is nowadays: internal and foreign challenges converge and present a fundamental challenge to what Georgia began to pursue after Eduard Shevardnadze – Western development in the foreign and internal political realms.

The complication for Georgia, however, is that in the time of illiberal pushback, the collective West too is faltering. EU and NATO expansion are on hold, and internal differences beset the multilateral institutions on which the liberal order operate. The critical window which Georgia had between the end of the Soviet Union and the mid-2010s is now largely gone. Hopes for a reinvigorated EU and NATO in the South Caucasus are slim, and, unfortunately for Georgia, it does not have enough geopolitical power to pursue a full-scale multilateral foreign policy. Relations with Russia are tied to the issue of illegal Russian troop presence in Georgia’s two regions of Abkhazia and South Ossetia; more intense ties with China might result in a negative reaction from the US, and the same goes for relations with Iran.
Georgia is increasingly neither in the West, nor in the East, but somewhere in the middle. This brings risks, less security and more uncertainty.