A New Europe…without the United States? 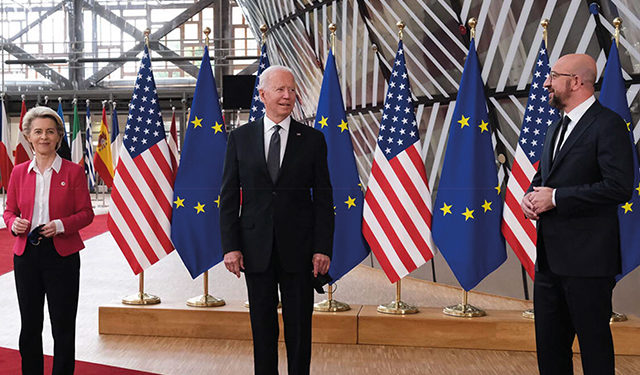 French President Emmanuel Macron speaks after a meeting with Greek Prime Minister Kyriakos Mitsotakis, calling for Europe to be wary of their relationship with the United States. Photo by Ludovic Marin/EPA-EFE/Shutterstock

When the transatlantic alliance is less robust and less solid, this is not good for security in Europe or anywhere in the world. This is more than a bilateral trade or industrial topic. It’s more than that. – President of the European Council Charles Michel

America and Europe have long shared a genial relationship, with trade, tourism, and military cooperation. Recently, the United States has made moves that caught the European Union (EU), as well as sectors of the NATO community, off guard, so much so that some of the European leaders, media figures, and outspoken Europeans themselves have taken to the stage to call for a movement of isolation from the United States.

The US has long provided extensive support to the NATO mission, the aim being to enable the European forces to counter Russian aggression and strengthen their response in the shadow of United Nations’ weakness in other parts of the world, as well as offering military and humanitarian assistance from Africa to the South Pacific, as well as training assistance on European soil during relative peacetime.

However, recent actions taken by the American government have elicited the ire of many European officials. While some simply voice their concern, others have taken steps to further distance themselves from their Western partner. These relations, if allowed to continue to sour, could be the divide nations like Russia and China have been waiting for with baited breath.

Afghanistan and the poorly executed withdrawal was the first of these occurrences. In the United Kingdom, Parliament voiced palpable anger at the United States President over his handling of the situation in the Middle East nation. With American troops being pulled out so quickly, many European countries found themselves scrambling to evacuate their diplomats and Afghan employees. British lawmakers made it clear that they were not only displeased with the handling of the withdrawal, but also with the statements made by President Biden regarding the Afghan military and security forces. During a session of Parliament, the President was even held in contempt for his “catastrophic,” “dishonorable,” and “shameful” exit operation. British Army veteran and Conservative Party Chairman of the Foreign Affairs Committee, Tom Tugendhat, went on to say, “Those who have never fought for the colors they fly should be careful about criticizing those who have.”

The United Kingdom, arguably the United States’ closest ally, has since vented its anger at the President repeatedly. Some even question the relationship with America overall. While it’s doubtful any serious degradation in relations will occur, it is notable for such a significant portion of their leadership to speak in such a way about Biden.

France, too, has become enraged at the decisions made by President Biden. After France was deliberately left out of a deal to supply Australia with nuclear submarine technologies, French President Emmanuel Macron voiced his distrust of the American administration. French Foreign Minister Jean-Yves Le Drian characterized the move by Biden as a “break of trust between allies” and recalled diplomats from the United States and Australia.

The European Union and its leadership have come out strongly against Biden’s decisions, most notable with Charles Michel stating, “We are observing a clear lack of transparency and loyalty.” He held a meeting with the 27 European heads of state for October 5, with the key subject being the expanding divide between Europe and the United States.

While some European diplomats have framed the issue as merely a contractual problem between Paris, Canberra, and Washington, others have cited that this is exactly what NATO’s enemies want. A split between the United States and Europe is exactly what the Kremlin could capitalize on, both in Ukraine and Georgia, but also in a movement into the Baltic nations. Charles Michel made this clear in his statement on the subject, saying, “When the transatlantic alliance is less robust and less solid, this is not good for the security in Europe or anywhere in the world. This is more than a bilateral trade or industrial topic. It’s more than that.”

German officials have stood by France in questioning their alliance with the United States. “I think all Europeans should stand with France, because the main problem in this regard is whether we can really have with America a partnership-oriented, trustful relationship,” said Manfred Weber, the German leader of the dominant conservative European People’s Party. As German Chancellor Angela Merkel eyes retirement, the new leader will be forced to make a heavy decision with regard to his country’s relationship with the United States.

These calls for greater European autonomy and separation from the White House’s unpredictable strategy could easily be put to ground as a simple ripple in foreign relations. However, with so many leaders calling for what Michel describes as a “need to develop our own capacity to act,” this puts Georgia in a precarious position. As a close American ally for decades and with an intense passion to become the next European Union member state, Georgia may become the site of a political tug-of-war.
Tbilisi, with both its European and American connections, can’t afford to simply choose one over the other. While it’s unlikely to come to that type of decision, the European push for further autonomy could have an effect on Georgia’s close ties to the United States. Despite over $1 billion in government investment from America, Georgia still requires European integration for its own domestic advancement.

In addition, the NATO ascension path will require all three parties to maintain close cooperation.
The European Union, and its portion of NATO, have long been seen as lacking in their military strength and contributions to the organization. With a redoubled effort and further investment in defense priorities, it’s all too easy to see the dependency on the United States become lessened. Lessened is not however a complete removal. The United States and its vast political and military weight must be leveraged, but to what extent is in the hands of the European leaders now.

It is indeed true that Georgia, NATO, and the EU would most likely require the United States in the event of a major political or military incident with Russia or China. However, if that support can’t be guaranteed or expected during times of dire crisis, then perhaps the dependency on that support should be removed. Outside of defense, the economic, cultural, and general strategic consequences of that estrangement would have global repercussions.