A Much-Needed Strategy toward the Wider Black Sea Region 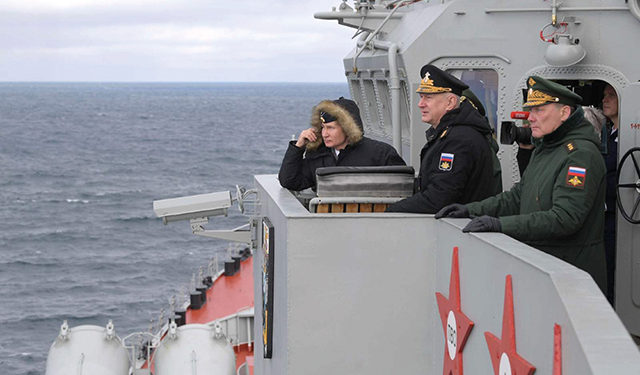 Joint exercises of the Northern and Black Sea fleets. With Commander-in-Chief of the Navy Nikolai Yevmenov, center, and Commander of the Southern Military District Forces Alexander Dvornikov. Source: Kremlin

As trivial as it might sound, a critical problem the collective West is experiencing in the wider Black Sea region is low soft power capabilities. Money is being spent, but either not enough, not run efficiently or both at the same time.

In Georgia, Moldova, and Ukraine, the countries that aspire to join Western institutions, the support for being pro-Western is genuine and has been fairly high amid Russia’s aggressive foreign policy over the past twenty years. But a certain fatigue, the realization that the West is not doing enough, has been growing. And this is the most dangerous development for NATO/EU enlargement plans. As Russia is likely to achieve at least some of its aims, it will double down on pressuring Georgia and Moldova into renouncing NATO and perhaps even EU aspirations.

If the thinking in the West is that Russian coercion would be causing popular pushback, there are caveats to this logic. First, there are many in Georgia and Moldova who argue the West has been unable and simply not been active enough to compete with authoritarian trends in the wider Black Sea region. And there is truth to this thinking. The West has been largely absent from the developments leading up to and after the second Nagorno-Karabakh War. It also did not limit cooperation let alone punish Russia for invading Georgia and six years later for annexing Crimea.

These are the facts that are resonating far and wide among the nations around the Black Sea. Another problem is that there is also nearly absent Western interaction with the separatist regions. To be sure, significant limits on the cooperation between with the separatist entities are imposed by the sovereign states themselves. But it is more so because of the lack of strategic vision and most of all soft power outreach from the West that would help detach those territories from Russian influence. No long-term vision exists which would aim at winning the hearts and minds of the Abkhaz, Ossetians, or residents of Transnistria and increasingly so, Donbas.

The West is still in the middle of processing what is taking place in the wider Black Sea region. Only with Russia’s invasion of Ukraine do shifts appear to be happening. Moscow’s belligerence led to the soothing of tensions within the trans-Atlantic community. Even in the EU itself, some sort of wider understanding is emerging, whereby Russia is viewed not only as an acute threat to the liberal order, but actually capable of upending the system altogether.

There is now a growing momentum to lay building blocks for an overarching Western strategy in the Black Sea. This is the space which should be increasingly seen as a battlefield between the two systems: the Western and the Russian authoritarian one. Whoever manages to dominate this theater also manages to set the rules for how international relations will play out.

Yet, little evidence suggests that there are discussions on how to address the separatist territories. Donbas, Crimea, Abkhazia, and Transnistria are either close or have direct access to the Black Sea. Formulating a region-wide vision without factoring in the role of those territories would be futile. The measures should include economic mechanisms, an increased emphasis on the inviolability of sovereign territories, and a set of tough sanctions imposed on those who decide to recognize separatist regions as independent.

A geopolitical component to a long-term strategy is winning back Turkey. Wary of Russian military moves, Ankara looks at and needs the West. Divorcing it from Russia will be difficult and perhaps no hopes should be placed upon Ankara’s total disengagement with Moscow. But what should be worked toward is constructing a space where, along with Turkey, the West will be able to project significant military power to at least prevent future military escalations.

The alternative is a bleak international security situation. With such small steps as in Abkhazia and Donbas before 2022 and now more globally in the whole of Ukraine, Russia has been gradually laying the ground for a final assault on the present world order. And it includes diluting the West’s ability to project itself as a viable soft power. After all, much of attraction to the liberal democracy depends on its softer side.

Russia now serves as a catalyzer behind the radical changes within the trans-Atlantic community. As the trust in NATO and other multilateral institutions grows, so should the momentum behind the search for a long-term vision for separatist regions around the Black Sea. Russia’s sprawling separatist empire is becoming increasingly difficult to maintain, both financially and militarily. In the longer run, this presents geopolitical opportunities.