A Different View of the War 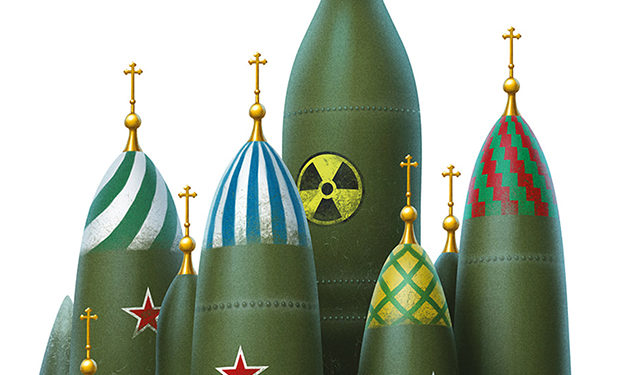 The Russian-Ukrainian now month-old fratricidal war is yet another heartbreaking example of unbecoming strife between Christians. Moreover, one that is happening between long-lived-together and successfully surviving Christian Orthodox believers who should ideally and presumably be helping each other against a mutual enemy (provided they have one), not killing one another so uncompromisingly and relentlessly. In reality, these two closely-related peoples should be the epitome of brotherhood and friendly cooperation, not maintaining and presenting to the world this horrible pattern of bitter hostility and unmitigated hatred. At the very least, their historically-shared ethic origin, if not their joint Christian faith, should keep them clear of this interminable scary contention.

In our modern complicated and heavily interdependent world, all these political interests, national security exigencies, economic stresses and geopolitical pressures might easily be understood, but why this heinous bloodshed between members of the same genetically and culturally intertwined family, one which has in the past done many good things in their happier togetherness? I will never believe that Russians and Ukrainians lack so badly the mental and linguistic ability to reach an equally beneficial and reciprocally acceptable agreement on things; to peacefully negotiate the matured between them issues, and to make way for further mutually useful and advantageous development.

To the most regrettable chagrin of both nations, they have needed help in the last 30 years to find a common nonviolent tongue, and there are some nations out there who want and are ready to provide assistance. Yet, those who are prepared to help at times become the inciters of discord, inadvertently provoking an unwanted clash between the siblings- the abettors, if there are any, being the most civilized and well-to-do nations that the world has ever known. They may not be intentionally doing harm, but the result is very much real and present. What if those helpers give preference to nonstop go-between aid rather than continually supplying the sides with destructive armament?

The strangest thing is that nobody is for war, nobody wants death and ruin, but when push comes to shove, they all become stiff, unthinking, shortsighted, unreasonable and restrained players of the war-or-no-war game. In most cases, all of them would foist their own interests and aspirations into possible solutions in favor of world peace. Any slaughter could be eschewed if Man applied his inherent moral and mental skills to turning a contradiction into conformity. Unfortunately, violence is just as intrinsic to us humans. And that’s exactly what prevails in the decision-making process worldwide. Who told us to annihilate our brother Christians? If fairly spoken, not only Christians, but any human being of any race and faith, though I am emphasizing the mutuality of faith in this war because the Russians and Ukrainians are indeed people of the same flesh and blood, culture and faith, history and future, and it is truly difficult to bare so much spilled blood and lost souls in the unwisely unfolded gory battlefields between them.

Incidentally, neither of the fighting sides wants to remember that someday in the near future, all the direst consequences of today’s belligerency between them will turn into the pretext for another war, one even more ruinous and disastrous. And who will be made responsible for the dreadful results of that war? Maybe nobody! And that’s the worst cynicism of our weird times, times when human sophistication should in fact have achieved the highest possible level of development, but all remains stuck at the same barbaric level, with bloodthirsty militant powers and foolishly proud defenders of their right to reciprocate in kind.

This cannot go on. This has to be stopped at any cost of conscience and pride. Russians and Ukrainians should not plainly and heartlessly be killing each other. Better to unite; marry one another; have kids together; sing and dance together; create happiness for each other, and, hand-in-hand, show the rest of the world that this is not only possible, but inevitable too.